‘This is not over’: UMN faculty reflect on the failed union movement

University of Minnesota educators spent years organizing for a union vote — but that day never came. 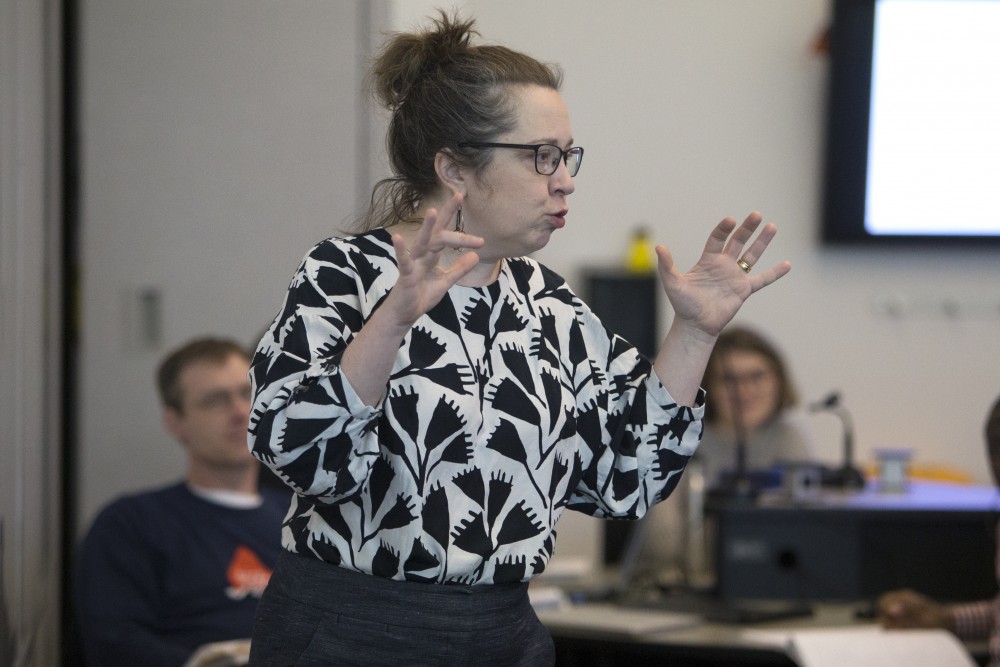 Architectural photographer and University of Minnesota adjunct faculty Christian Korab was in the middle of construction at his Twin Cities-area home studio in 2015 when he heard a knock at the door.

Hammer in hand, he found two faculty union organizers on his doorstep. They asked if he would be interested in talking about unionization, and the conversation lasted an hour.

“They didn’t need much to get me going,” he said. “I was quite receptive to the idea.”

Professors, lecturers, teaching specialists and instructors, among other employees, joined the most recent University faculty unionization effort following conversations like these. Many hoped a union would force the University to address frustrations with working conditions and worries about higher education’s future.

After that, Korab dedicated several hours each week to the unionization effort. He attended meetings and testified at a government hearing about the movement’s value.

But the effort’s manpower and energy dwindled quickly when the University raised a series of legal objections to the organizers’ efforts, spending at least $500,000 in the process. Supporters viewed the administration’s actions as a war of attrition on the union movement.

Even some of the most enthusiastic faculty dropped out as the movement stalled during the months-long legal battle. In spring 2017, Korab distanced himself from the effort in part because he didn’t have sufficient time to keep up with union activities and because of the tangible loss of momentum.

“I’m disappointed to not see the force of vision … emerge from this process because this has been going on for quite a few years now,” he said.

About six months after a court decision effectively ended the effort, union organizers are working to re-define the movement. On Feb. 21, movement leaders announced that faculty voted to cut ties with SEIU. The effort will undergo a “transformation and period of rebuilding” to “continue to fight … for all faculty,” according to the statement.

The group’s next steps will likely take the form of a workers’ association, though many details remain unclear. The organization would function within the University’s existing faculty governance system and lack the legal clout of a union, leaving some organizers disillusioned.

A University spokesperson did not make administrators and representatives from the University’s Office of Human Resources available for comment.

Representatives from SEIU did not respond to interview requests or declined to comment.

SEIU Local 284 Executive Director Carol Neiters did not agree to an interview after repeated requests, writing in an email, “The history of the campaign and where it goes from here is a story to be told by the faculty involved in the organizing campaign. It’s their story to tell.”

Union supporters said they hoped to gain a voice at the University. However, diverging opinions on what issues should take center stage complicated the process.

Some, like lecturer Marta Shore, said they wanted to first address working conditions, like unfair teaching assignments, inadequate teaching spaces and job insecurity, since many teaching staff are hired on nine- or twelve-month contracts that union supporters said can be non-renewed for almost any reason with little notice.

Shore joined the union effort around 2015, when teaching four classes, advising more than 200 statistics undergraduates and working between 60 and 70 hours most weeks made her exhausted and stressed.

When she tried to advocate for better conditions, Shore said she received insufficient support and soon left the University for a unionized job.

While Shore, who has since returned to the University, is no longer active in the organizing movement, she maintained that unionization would help instructors who are overworked, overwhelmed and feeling powerless in the workplace.

“[Adjunct faculty] are not valued by the University to the extent that they’re adding value,” said Jason McGrath, a tenured Asian Languages and Literatures professor who supports unionization. “That’s unfair to them, and bad for the University in the long run.”

Others hoped to bring less tangible concerns to the forefront, like perceived power imbalances.

Faculty have tried and failed to address issues like professors’ increasing workloads and the growing reliance on adjunct faculty with the current administration, said tenured horticulture professor Jerry Cohen, who was involved in the union effort.

“We’re not co-equal. We can advise, and [the administration] can ignore,” Cohen said.

After discussions with supporters, some University educators were not convinced a union would solve the school’s woes.

“My experience is that the union organizers are right that we don’t have the structural protections around our [faculty] voice,” said Joseph Konstan, a computer science and engineering professor. “But I think they’re wrong in saying it would be substantially better with union organization.”

Some were skeptical that Minnesota’s SEIU – which represents about 58,300 Minnesota and Wisconsin workers in industries including manufacturing and health care – could adequately represent faculty, partly because of its limited experience with higher education.

“Why bring in people who actually don’t know how the University is running?” said chemistry professor Philippe Buhlmann. “I was worried that we would actually make things worse by adding to an existing administration … and make things even slower than they are.”

The start of a movement

SEIU’s search for union supporters spanned University hallways, offices and — for some like Christian Korab — homes.

“It starts with talking to people in your department — finding out what their concerns are … [and] what things would they like a union to address,” McGrath said.

Union representatives held one-on-one meetings in professors’ offices and energetic, optimistic group gatherings at places like Bordertown Coffee and Folwell Hall. These early meetings aimed to define faculty concerns and typically attracted around 20 to 25 supporters that some described as ideologically predisposed to unionization: liberal, motivated and involved in University affairs.

These efforts culminated on a bright January 2016 day. McGrath and a group of teaching staff gathered boxes holding hundreds of signed union cards and dropped them off at the Minnesota Bureau of Mediation Services.

Under Minnesota law, at least 30 percent of a bargaining unit’s eligible individuals must indicate they want a union vote before organizers can schedule one.

Before they left, McGrath and the group took a picture together outside the building to commemorate the occasion.

“It was probably the highlight of the campaign because we felt like all our organizing was paying off finally,” he said.

Progress soon reached a standstill. SEIU submitted a petition to the BMS requesting that it allow faculty from two state-defined bargaining units to vote in the same election.

Unit 11 “consists of all professional and administrative staff positions” not included in other units defined by state law, like teaching specialists and lecturers, along with dentists, librarians and athletic trainers.

SEIU contended that the BMS should let some Unit 11 instructors vote with Unit 8 because they share similar job functions.

The BMS moved forward with SEIU’s request and held a hearing that spring, featuring testimony from stakeholders who argued for or against the idea that the two groups shared sufficient interest to vote together.

The University disagreed with the BMS’s decision to hold the hearing.

“By taking this step, the BMS ignores the law as it has been written since 1991 and as it has been applied for decades,” University Director of Employee Relations Patti Dion wrote in an April 2016 email to faculty.

Throughout 2016, three of the University’s top administrators released letters about the unionization effort. Of those letters, only President Eric Kaler’s expresses explicit opposition to the effort, citing concerns about a union’s impact on the University’s reputation as a research institution and its ability to recruit faculty.

Then, in September, the University came under fire from some faculty and legislators when it became known that between March and mid-July 2016 the institution used state taxpayer and tuition money to pay for $500,000 in legal fees in the fight against the union effort. Later, the University reversed course and used money from a different fund.

That same month, the BMS announced a decision to let instructional staff vote as one bargaining unit. The University brought the case to the Minnesota Court of Appeals in December 2016, after the BMS affirmed its decision when the school asked it to reconsider.

To many, the University’s actions did not come as a surprise.

The administration stated in multiple communications to faculty that it supported employees’ rights to determine whether they want union representation.

While the groups waited for an appeals court decision, Faculty Excellence questioned the legality of SEIU’s filings with the BMS.

According to court documents, the group sued the BMS in June 2017, after requests for information related to the union cards were not filled.

‘This is not over’

The court’s decision came in September 2017: the BMS did not have the authority to reassign certain employees to another bargaining unit. Staff like lecturers and teaching specialists could not vote with professors.

The decision was a significant blow to the organizing effort, but some remained hopeful a potential appeal to the Minnesota Supreme Court would end in a more favorable decision.

The end of the movement came a month later, in a gathering of fewer than 30 people in Folwell Hall. SEIU representatives put the organization’s next steps to a vote among supporters, who voted down the option to appeal.

“I suggested that [SEIU organizers] put it to a vote of people who had signed cards because it was a big decision, and they dismissed that,” Cohen said.

Soon after, Minnesota Academics United, the group behind the union push, announced it was dropping the official union drive and moving forward with a workers’ association.

Last month, several leaders of the union effort announced in an email that faculty voted to “sever official ties with SEIU Local 284” and thanked the organization for its work.

“We will now undergo a longer term transformation and period of rebuilding,” the email reads.

Little detail about the workers’ association has been made public since the September announcement.