Student organizers took up party leadership positions, while Omar won without a challenger. 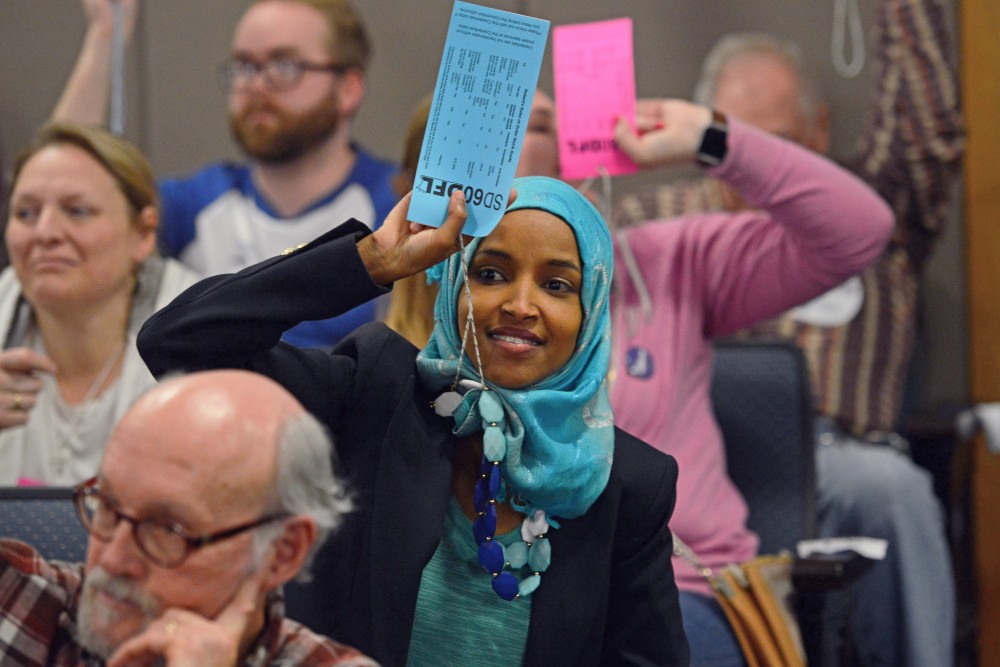 State Rep. Ilhan Omar, DFL-Minneapolis, holds up her credentials to vote on who should be the chair of Senate District 60 during the DFL convention at Edison High School in northeast Minneapolis on Saturday, March 24.

Without a DFL challenger for the House District 60B seat, Omar earned the party’s endorsement without a formal vote on the Senate District 60 DFL convention floor. Student organizers also took on party leadership roles.

In her acceptance speech, Omar stressed the community involvement in her campaign.

“I spend thousands of hours talking to people in District 60B, building a broad coalition of students, longtime residents and new Americans,” she said in the speech. “We will continue to fight for unity and justice every single day.” Omar said in the speech student involvement and support for other DFL candidates is crucial for the party to flip the House and maintain control of the governor’s office.

Students for Ilhan, the campaign’s student organizing group, had its first meeting Friday. The group is made up of 15 interns, three of whom served as 60B delegates at the convention.

University of Minnesota senior Jennifer Howard, president of Students for Ilhan, said the group’s goal goes beyond Omar’s re-election. She said members also intend to communicate with local officials and organize at the Capitol.

“It’s not just about the campaign,” she said. “It’s about getting students mobilized and making sure their voices are heard.”

Neculescu was not part of the nomination report submitted at the convention, but was nominated on the convention floor by a fellow student after deciding to run last-minute.

In front of the convention, Neculescu spoke about the importance of student involvement in elections and cited her past work with former mayoral candidate Rep. Raymond Dehn, DFL-Minneapolis.

She said students are a large population of the district, but are not always taken seriously in political leadership roles.

“I’ve gotten a lot of, ‘Well, they’re gone in four years, so it doesn’t really matter.’ Even this morning when I was talking with some other people about running, that’s the response I got,” Neculescu said.