Plans for a new stadium have been approved by University President Bob Bruininks and the Board of Regents. 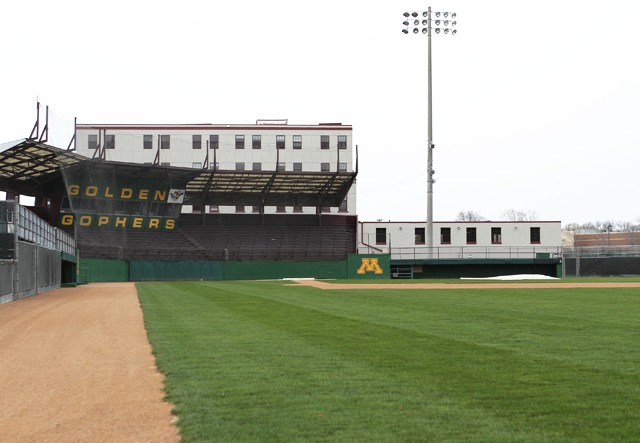 The University of MinnesotaâÄôs baseball team was elated to play in the first game at Target Field on March 27. However, merely participating in a test drive for the Twins is not enough for Gophers coach John Anderson and Athletics Director Joel Maturi. They want a new ballpark for the Gophers. Plans for a new open-air stadium to replace the on-campus Siebert Field have already been approved by University President Bob Bruininks and the Board of Regents. Maturi, who was courting potential donors during the game at Target Field, said there is no timetable on when ground may break for the proposed stadium. Maturi estimates that the total cost of the project, which will rely entirely on private funds, will be between $15 million and $18 million. Maturi said he hopes to begin construction prior to raising the entire sum. âÄúWe do think we are in desperate need of a field and stands and the basic amenities to play collegiate baseball,âÄù Maturi said. In order to accomplish this goal, the project has been divided into two stages. The first stage, which Anderson estimates will cost about $7.5 million, would provide the bare essentials of a stadium: a field, stands, an entryway, a press box, restrooms and concessions. The second stage would include things like locker rooms, indoor batting cages and âÄúsome of the other amenities weâÄôd like to have but donâÄôt need immediately,âÄù Maturi said. The athletics department has begun what Anderson describes as âÄúquiet fundraisingâÄù for the new ballpark, which will feature an artificial surface so it can serve as a multipurpose facility. âÄúWe donâÄôt want to go too public until weâÄôre sure we have at least an initial amount of money and pledges that we feel like we can really do something.âÄù Anderson said March 27. âÄúWeâÄôve had a lot of starts and stops in this process, and we surely donâÄôt want that again.âÄù According to the docket from the Board of RegentsâÄô Feb. 12 meeting, the University received four gifts and pledges in December for an âÄúon-campus stadium.âÄù Amounts gifted ranged from $5,000 to $50,000 and came from both individuals and organizations. The Gophers are slated to play their entire home schedule this season under the MetrodomeâÄôs Teflon-coated roof, instead of at the on-campus, open-air Siebert Field. With the collegiate baseball season beginning in February, Maturi said that even with the new stadium, the Gophers would likely schedule home games at the Metrodome through early March. While Siebert Field is in good condition, Maturi said the dilapidated stands around the field present âÄúserious safety issuesâÄù for the fans. âÄúQuite frankly, much of the stands have already been condemned,âÄù Maturi said. âÄúItâÄôs falling apart.âÄù He said that in the past, pieces of the stands have actually fallen down during the course of games. âÄúWe definitely have the worst [stadium] in the Big Ten,âÄù Maturi said. The new ballpark would be built on the same site as Siebert Field, near the intersection of 15th Avenue Southeast and Fifth Street Southeast, with slight modifications. Home plate would be pushed back to where the pitching mound is currently. The plans call for a new entryway built at what is now right field, making the stadium more accessible, especially for fans parking in the Fourth Street Ramp. âÄúHopefully it will entice students as well as people in the community to come and watch some good baseball,âÄù Maturi said. Anderson and the GophersâÄô storied baseball program, whose alumni include Hall of Famers Dave Winfield and Paul Molitor, could certainly use any additional fanfare. The last game played at Siebert Field, a May 5, 2009 contest against North Dakota State University, drew a meager crowd of 414. The baseball program is not one of the UniversityâÄôs money-generating sports, and Maturi said a new ballpark would not carry with it expectations of significantly increasing revenue like TCF Bank Stadium. Plans for basketball In addition to the new baseball stadium, Maturi is working on securing funds to build a basketball practice facility. Maturi said practice facilities around the country range in cost from $15 million to $50 million. âÄúIâÄôm convinced ours will be closer to $15 [million],âÄù Maturi said. Like the baseball stadium, the practice facility would be privately funded. Currently, both menâÄôs and womenâÄôs basketball practices are held on Williams ArenaâÄôs single court, making it difficult for players to stop in for individual workouts. While the University was recruiting menâÄôs basketball coach Tubby Smith in 2007, Smith asked Maturi and Bruininks, who at the time were trying to garner enough support from donors to build TCF Bank Stadium, if they would consider building a practice facility. Maturi said they told Smith they would concentrate their efforts on raising money for both the baseball and basketball projects after TCF Bank Stadium was funded. A practice facility would have a tremendous impact on recruiting, Maturi said. âÄúI think for Minnesota itâÄôs huge because, in all due respect, to those of us who love old Williams Arena, that doesnâÄôt turn on 18-year-old kids,âÄù Maturi said. âÄúIt is about impressing 17- and 18-year-old kids.âÄù