The Minnesota Daily • May 27, 2020 • https://mndaily.com/226646/news/br-thousands-march-to-protest-police-brutality-after-death-of-george-floyd/

Despite steady showers and a global pandemic, police and protestors clashed for several hours Tuesday evening. 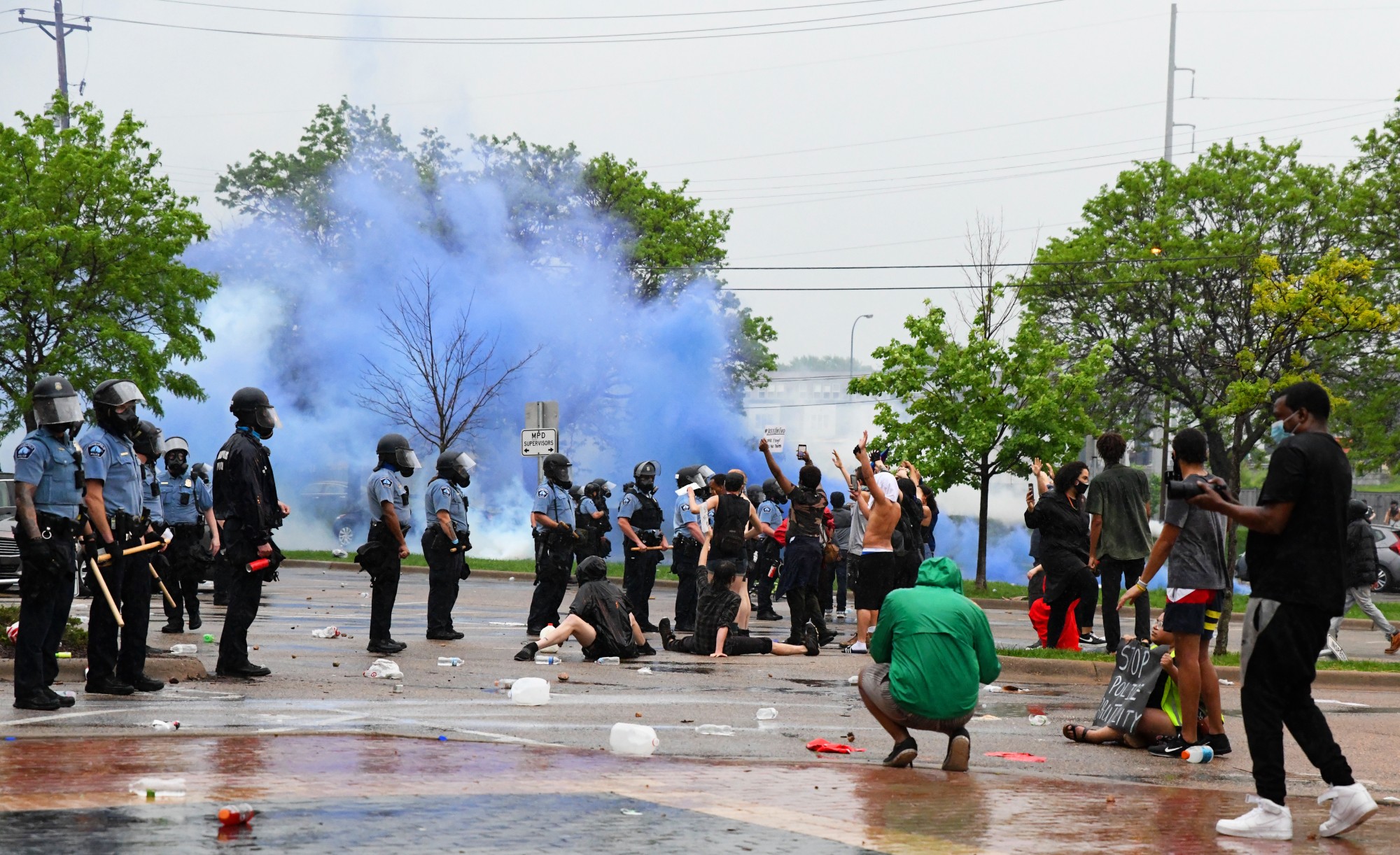 Protesters clash with police outside of the Minneapolis 3rd Police Precinct on Minnehaha Avenue on Tuesday, May 26. The protest was in response to the death of George Floyd in police custody.

With most donning masks, thousands of people marched in South Minneapolis on Tuesday evening to protest the death of George Floyd. Floyd, 47, died in police custody Monday after a white police officer kneeled on his neck while Floyd repeatedly said that he could not breathe.

While the protest started out peacefully, demonstrators and police officers clashed in the rainy night outside the Minneapolis Police Department 3rd Precinct building.

The event was organized after a graphic video spread online of a Minneapolis police officer holding down Floyd by kneeling on his neck outside a corner store as he told police, “Please, I can’t breathe.”

The police officer has been identified by multiple sources as Derek Chauvin, according to the Star Tribune. The four officers involved in Floyd’s death, including Chauvin, have not been officially identified by the police department.

Despite the pandemic, about 6,000 people responded that they were attending the protest on Facebook.

The protest began outside Cup Foods at the intersection of Chicago Avenue and 38th Street, where Floyd was held down earlier this week.

People chanted “Let him breathe” as they held up signs and laid down gifts, such as flowers and signs, on the sidewalk. “It is time for us to make a change with our words,” said Jackie Mack, who said she was friends with Floyd and encouraged chanting throughout the evening. “All we want is some justice.”

Some protestors, like Jessica Oliver-Tebben, a University of Minnesota youth studies teaching specialist, handed out hand sanitizer, masks and water to attendees with her son Rodney. To maintain social distancing, some attendees stayed a few blocks away from the epicenter of the protest.

Francis Sullivan said he was too anxious to attend the protest, so he wrote Floyd’s name in chalk outside of his girlfriend’s home on Chicago Avenue. He said he would be there until the chalk ran out. Attendees marched to the MPD 3rd Precinct building on Minnehaha Avenue throughout the evening. At the station, some protestors spray painted words on the sides of the building and broke windows and doors.

During the clash, some protestors threw water bottles at police officers while others held hands and chanted. Protestors created a barrier of shopping carts from the Target parking lot across the street to shield against the rubber bullets and tear gas.

The protest organizers, which include the Racial Justice Network and local Black Lives Matter chapters, said in the Facebook event description that attendees gathered to demand the names of the four officers involved in Floyd’s death be released. They also demanded the officers be fired and criminally charged. Minneapolis Mayor Jacob Frey said in a tweet Tuesday afternoon that all four officers had been fired.

“This is the right call,” he said in the tweet.

While protestors said the termination was a good move, many are now calling for the prosecution of the officers involved.

On Wednesday, Frey called for Hennepin County Attorney Mike Freeman to charge the police officer who knelt on Floyd’s neck.

“I’ve wrestled with that more than anything else over the last 36 hours, with one fundamental question: Why is the man who killed George Floyd not in jail?” Frey said. “If you had done it or I had done it, we would be behind bars right now.”

Some University students showed solidarity with the Tuesday protest in their own neighborhoods. Kruz Karstedt and his housemates decided it was safer to not go into the community to protest due to COVID-19 pandemic and instead held up signs on Como Avenue. Some cars honked as they drove by.

“It feels like we would be doing more harm than good going into a minority community during the pandemic,” Karstedt said. University leaders have since spoken out against Floyd’s death.

Over Twitter on Tuesday President Joan Gabel said, “I am deeply saddened and angered by the news of George Floyd’s death … I stand united with the community in demanding accountability and justice.”

In a campus-wide email sent Wednesday, President Gabel said that the University would “no longer contract with the Minneapolis Police Department for additional law enforcement support” following the protests.

“We have lost interest in discussion, community conversation and ‘donut hours’,” Kerandi wrote. “The police are murdering black men with no meaningful repercussions. This is not a problem of some other place or some other time. This is happening right here in Minneapolis.”

Protests continued on into Wednesday night, a portion of which led to looting of local area businesses. The Target located at East Lake Street and Hiawatha Avenue was looted by demonstrators, and a nearby AutoZone appeared to be on fire.