Not the horror-fest it appears, "Jennifer's Body" is a fun romp attacking pop punk, shallow girls and everything else wrong with high school. 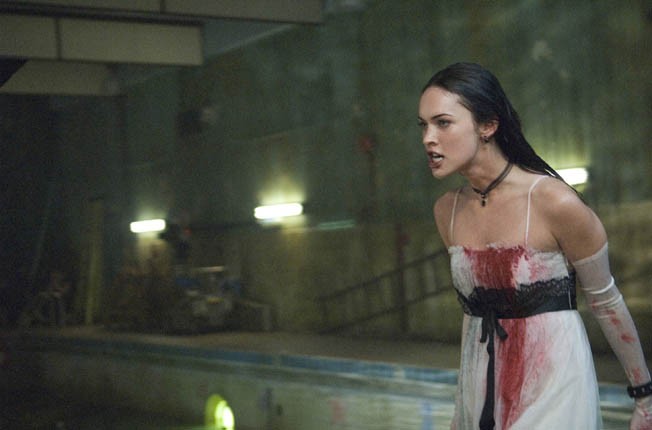 âÄúJenniferâÄôs BodyâÄù DIRECTEDY BY: Karyn Kusama STARRING: Megan Fox, Amanda Seyfried, Adam Brody RATED: R SHOWING: Area Theaters The trailers for “Jennifer’s Body” were slightly misleading. Sure they got across the fact that it’s a movie full of succubus-style man-eating, lesbian stuff and cat eye contact lenses, but it also failed to warn viewers that this film, above all things, is supposed to be funny. Powered by “Transformers'” Megan Fox, Amanda Seyfried (“Mama Mia!” and the dumbest “Mean Girl”) and Oscar-winning screenwriter Diablo Cody, “Jennifer’s Body” is undeniably fun and, like “Mean Girls” a cathartic exposÃ© of female friendships. It could be that “Juno” left Cody more connected than she’d like to the pro-life movement, so she decided to cut ties by writing a film full of ritual sacrifice, homicide and scavenging forest animals. But it’s more likely that “Jennifer’s Body” is a response to the obsession with dark mythology that has suddenly exploded in pop-culture. Finding herself somewhere between the vampire beloved by teenyboppers and the zombie championed by the ironic indie set, Cody has penned Jennifer, a high school girl who finds herself turned into an offshoot of a succubus, a creature who – excuse the rough definition – seduces men in their dreams and then eats them. Meanwhile, her “Jan Brady” best friend Needy (Amanda Seyfried) suspects foul play but is conflicted by her desire to “play boyfriend girlfriend” with Jennifer. Here, sex doesn’t result in pregnancy, but it does result in carnage. Unlike other human-eating-centered media, “Jennifer’s Body” takes the pop culture that surrounds this trend fully into account. Cody’s mythology, wherein Satan is more than happy to help out struggling indie bands, playfully jabs at the others, with a research montage clearly mocking “Twilight” and a setting in a town cheekily called “Devil’s Kettle.” The illusion of reality is fully laid-down by the presence of science class experiments and discussions of “for her pleasure” condoms, and when the surreal stuff kicks in – hovering women, hell-fluid vomit – the film doesn’t fully commit, keeping one foot in the realm of parody. When Jennifer propels herself above a pool as if she’s wearing a jet pack, Needy points out, unimpressed, that she’s not flying, she’s just “hovering.” ItâÄôs clear that âÄúJenniferâÄôs BodyâÄù isnâÄôt sure whether itâÄôs just a horror movie or whether it’s intellectually superior to a horror movie. At times that makes the film seem wishy-washy, but usually those moments of self-awareness are just funny. Humor is central to the dialogue in this Diablo Cody-an universe. Like âÄúJuno,âÄù âÄúJenniferâÄôs BodyâÄù is full of slang too witty to exist in actual spontaneous conversation. Characters say things like, “You’re totally jello [jealous],” “Where’s it at, Monistat?” and “tragedy boner.” These cooked-up dialogue bombs sounded quirky coming out of Ellen Page’s mouth in “Juno,” but they feel slightly odd coming out of Megan Fox’s Jennifer, a slightly “socially relevant” high school girl dressed in white parkas and heart-dotted zip-ups. âÄúJenniferâÄôs BodyâÄù isnâÄôt necessarily scary; there are few moments of undigestable gore or tense foreshadowing. Instead, the real horrors here are the tackiness of todayâÄôs high school culture and the modern incarnation of the âÄúwhoreâÄù archetype in the form of an absolutely evil best friend. As for the tackiness, every aspect of this film forces viewers to revel in it. Not only does a sell-out indie band dominate the plot, but the soundtrack is full of emo punk bands like Cobra Starship and Panic! at the Disco. During a chase scene, a car starts up and blares a song by the filmâÄôs faux band Low Shoulder, only to be turned off and have the spooky score tangibly shoulder its way back to its rightful place. The most satisfying aspect of this pop carnivore-fest, however, is the toxic friendship between Needy and Jennifer. Who better to portray the evil popular girl taken to the most literal, hyperbolic level possible than Megan Fox, with her machete-sharp eyebrows and Maxim-cover good-looks? If anything can be taken from âÄúJenniferâÄôs Body,âÄù itâÄôs that any girl whoâÄôs ever had a toxic friendship will find the violence of the film to be, admit it or not, emotionally gratifying. And for those whoâÄôve never suffered through said passage of teenage girlhood âÄ¦ thereâÄôs lesbian stuff.