Troy Stoudermire: a linchpin in a young cycle of D-backs

Granted a fifth-year of eligibility by the NCAA, Stoudermire will look to set a NCAA record while anchoring a young secondary. 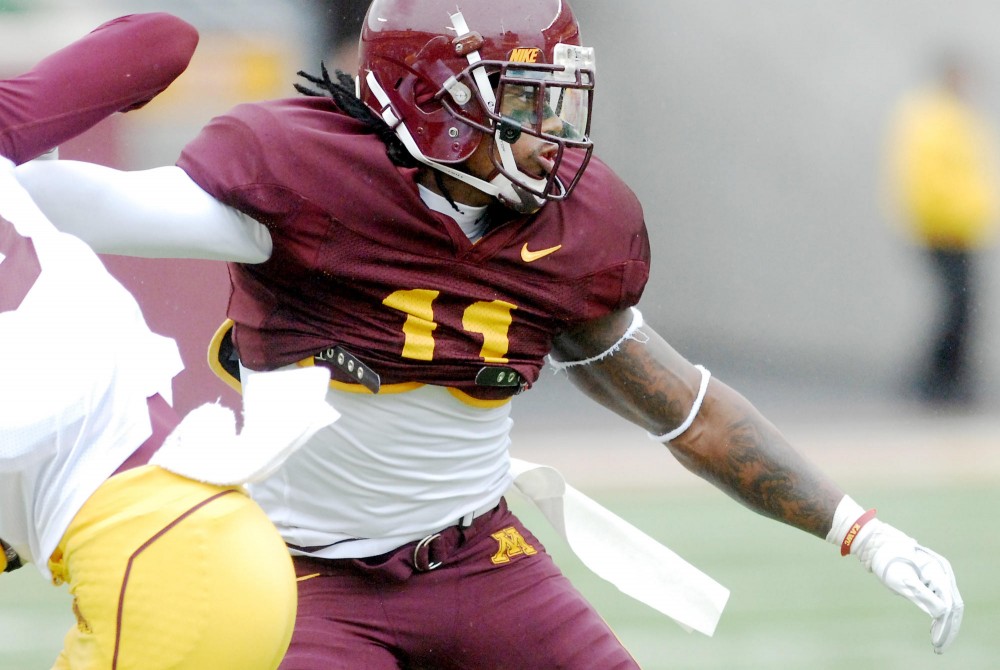 Troy Stoudermire’s impact on the field for the Gophers is undeniable.

As a senior, he only played in the first four games of last season, yet he led the team in interceptions with two by year’s end.

Stoudermire, 21, was granted a fifth-year of eligibility in January by the NCAA after a broken bone in his right arm made him miss the entirety of the Big Ten schedule last season.

During the Gophers’ annual spring game Saturday, their return man was forced to work on a transition that began during his junior year — starting cornerback. His impact was limited because no kick returns were allowed during Saturday’s game.

Head coach Jerry Kill said Stoudermire’s progress is due to his own preparation and motivation to get back on the field.

“You’ve really got to credit Troy for his growth as a young man and as a player,” Kill said. “He’s done everything we’ve asked him to do on and off the field.”

The Dallas native started at quarterback at Skyline High School. Then, former Gophers head coach Tim Brewster and his staff recruited him as an athlete — no specific position. By the end of his freshman year, he had already set the Gophers’ record for kick returns (42) and yards (1,083) in a single season.

“His explosive feet, his short-area quickness are off the charts,” Brewster said. “Those attributes mixed with his physical toughness
make him an outstanding cover corner.”

The all-around athlete also got time at wide receiver during his sophomore and junior years with the Gophers, until eventually settling in at cornerback, all while returning kicks.

Entering this season, Stoudermire holds the all-time Big Ten record with 3,102 kickoff return yards and is within reach of the NCAA record of 3,517. But he has never returned a kickoff for a touchdown in his collegiate career.

He admitted after Thursday’s practice that the NCAA record is on his mind.

However, Stoudermire will have another obstacle this season in breaking the record.

The NCAA mimicked the NFL in moving kickoffs forward five yards to the 35-yard line and placing touchbacks at the 25 instead of the 20. The new rules will be implemented this season in the name of player safety and could result in less kickoff returns overall.

“They moved it back, but I’m still ready to take it out any time I feel like it,” Stoudermire said. “Coach [Kill] told me it’s my choice.

“But it’s not the biggest thing on my mind right now.”

Saturday he jammed the Gophers’ starting wide receivers at the line, giving them trouble until they could make it five yards downfield.

“[The arm] didn’t bother me at all,” Stoudermire said Saturday. “I’m 100 percent and ready to go because when I was still hurt, I was in the weight room and film room every day.”

He’s only one of three returning defensive backs with experience in the Gophers system. Without the younger players filling roles, Kill said, Minnesota wouldn’t have a roster deep enough to hold scrimmages.

“We hope there’s more depth [in the secondary],” Kill said. “We lost seven secondary players [after last season]. If we don’t replace any of those guys, we don’t have a spring game or practices.”

Stoudermire and senior Michael Carter are the only two upperclassmen with experience at starting corner as last year’s starter Brock Vereen moves to safety. They’ll front a large group of young defensive backs and a couple of newcomers from junior colleges.

“It’s great [Stoudermire] got the extra season; we need him,” Carter said. “We just have to be leaders as we have the experience. Get on [the underclassmen] when they mess up but make sure we congratulate them when they do it right.”

Sophomore safety Derrick Wells said Stoudermire goes out of the way to help the younger guys.

“Even though he plays corner, he always helps me on the field,” Wells said. “He’s the veteran and is always there to make sure we’re watching film after practice.”

Brewster said when Stoudermire first came to Minnesota from Texas, he suffered from homesickness.

“But when he was on the field he was always in his element. I think that helped his development as a person and as a football player,” Brewster said.

As spring practices ended with Saturday’s game, teammates like Carter said they have noticed a difference in Stoudermire’s demeanor on the field throughout his time at Minnesota.

“Troy and I have been around each other for so long,” Carter said. “He’s really changed from the not-talkative Troy to the real-talkative Troy. He’s always the first one up on the drills saying what needs to be said.”