The junior backed up his pre-game words with three steals on Tuesday. 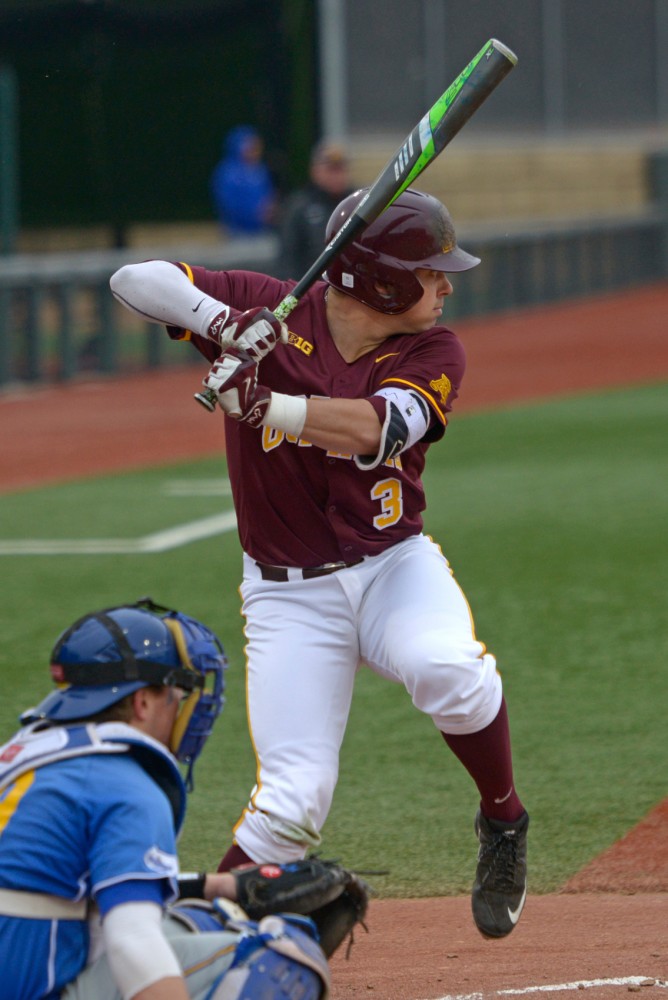 Junior Matt Fiedler prepares to bat during the Gophers' game against South Dakota State at Siebert Field on Tuesday afternoon.

Ben Gotz
Matt Fiedler didn’t let a big, ugly bruise on his thigh keep him out of the lineup Tuesday. And when head coach John Anderson asked him if he was OK before the game, the junior said he was going to steal three bases.
It took Fiedler only three plate appearances to keep his word. Even with the large mark on his leg — left by a line drive that hit him as he was pitching last Friday — Fiedler had three steals, two hits and an RBI in the Gophers’ 7-3 victory over South Dakota State at Siebert Field.
“I said, ‘OK, go get ’em,’ and of course he did,” Anderson said of Fiedler’s three-steal declaration. “He’s a ballplayer. That’s the best way I can describe him.”
Fiedler was one of several Minnesota players to move around the base paths as the team finished with a season-high six steals on Tuesday.
The Gophers (19-10, 4-1 Big Ten) also took advantage of six walks, seven wild pitches and one passed ball by South Dakota State to earn a fifth consecutive victory.
The running game helped the team generate offense even on a cold and windy day that kept the ball from traveling too far.
Nine of Minnesota’s 10 hits were singles, and hits drove in only two of the team’s runs. The rest came on two wild pitches in the bottom of the fifth and on sacrifice flies in the second, fourth and sixth innings.
Fiedler scored the first run in the fifth after stealing second and moving to third and home off of wild pitches. After redshirt junior Jordan Smith hit an RBI single, sophomore Micah Coffey also scored on a wild pitch to give the Gophers a 6-0 lead.
“With the wind blowing in like it is, it’s a little tougher to do damage through the air, so we showed our versatility, used the small game a little bit more,” Fiedler said. “We stole some bags. We were able to come through with some clutch singles, and we tried to bunt a little bit.”
Minnesota’s pitchers displayed better command on the mound than the Jackrabbits, with freshman Nick Lackney starting the game off with a perfect outing to earn his first victory.
The lefthander retired all 10 batters he faced and recorded three strikeouts to maintain his perfect earned run average in six appearances. He had only one three-ball count and used his two-seam fastball to get six fly-outs.
“The two-seam is usually a go-to pitch for me,” Lackney said. “Usually a change-up is, but today we worked with the slider more than the change-up.”
The Gophers used four pitchers after Lackney, and Anderson said he liked the way redshirt junior Tim Shannon and redshirt senior Jordan Jess threw.
Shannon relieved Lackney in the third and got seven outs before leaving with one on and two outs in the sixth.
Sophomore Jeff Fasching took over for him and saw three runs score on an RBI single and double before ending the inning on a strikeout.
The Gophers added one run in the bottom of the sixth and were still up 7-3 when Jess entered the game with two outs in the eighth.
He finished the game with one of his best outings of the season, recording three strikeouts and a groundout.
“It was a great outing for him,” Anderson said. “He’s a fifth-year senior. He’s experienced. He’s got plus stuff. He’s at the back end of that bullpen, and he’s going to be in a lot of games here at the end when they’re close.”
Delete Image
Align Left
Align Center
Align Right
Align Left
Align Center
Delete Heading