After protests against police brutality turned to looting Wednesday evening, businesses near the University shuttered or displayed signs of support anticipating another night of unrest. 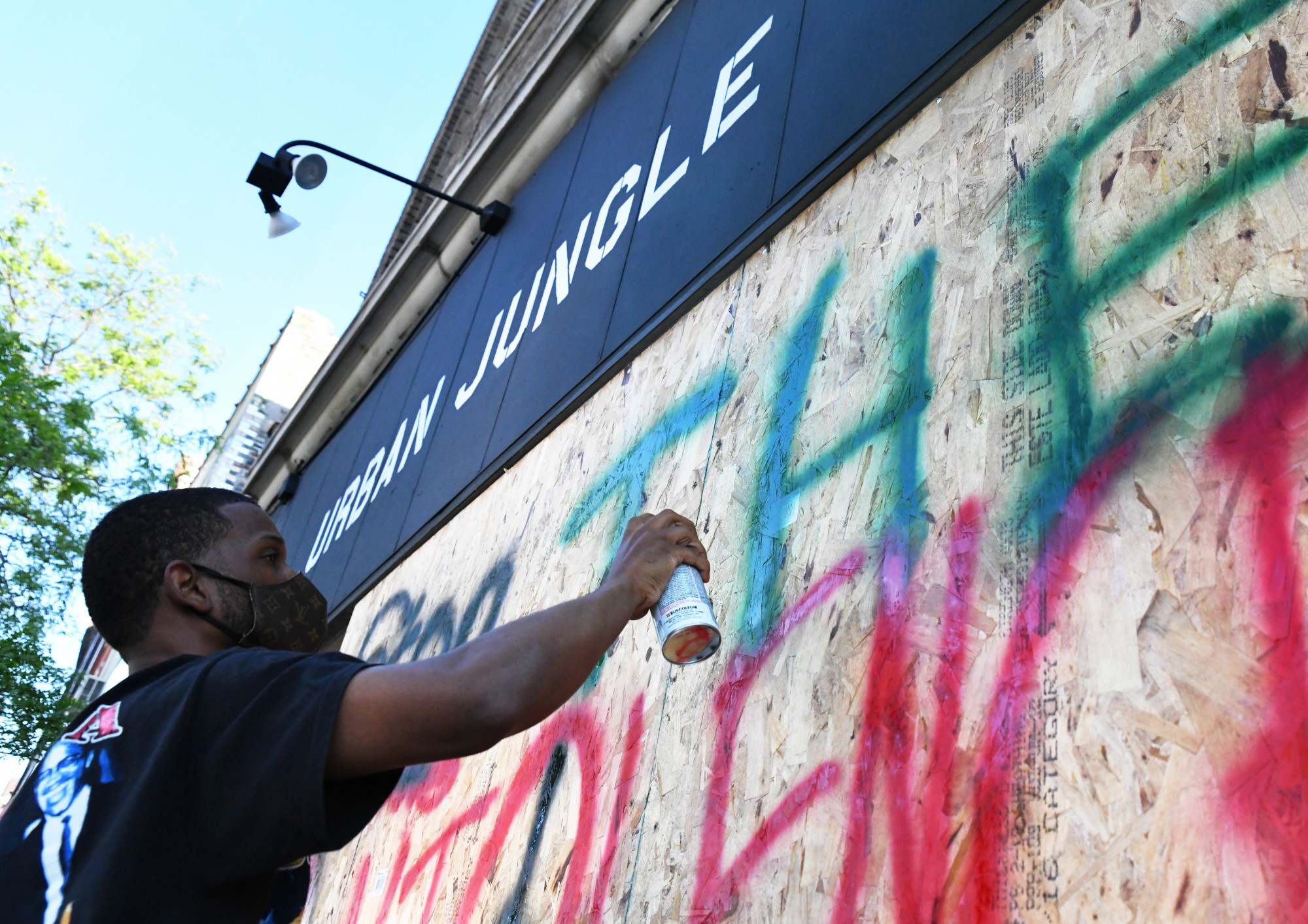 Tommie Daye, owner of Urban Jungle, spray paints “Stop the Violence” on his boarded-up shop window in the Cedar-Riverside neighborhood on Thursday, May 28.

Many businesses around the University of Minnesota campus shut down and were boarded up Thursday afternoon in preparation for potential protests, riots and looting.

The closures came after two days of protest and unrest following the death of George Floyd earlier in the week. Protests against police brutality turned violent Wednesday night, with multiple businesses in South Minneapolis looted or set on fire. Additional theft took place at businesses in St. Paul on Thursday.

Juliana Bryarly, owner of Acadia, hung up signs on the windows. She is expecting the place will get looted tonight but wanted to show support for George Floyd pic.twitter.com/lHesynBJn2

Tommie Daye, owner of the streetwear and vintage clothing store Urban Jungle in Cedar-Riverside, sat outside his storefront Thursday afternoon as he and colleagues put wood panels over the shop windows.

Daye and the group cleared merchandise from the store. They stood outside the shop armed through the night Wednesday. About 35 people came by throughout the night, trying to scope out the store, Daye said.

The store owner decided to take action after seeing a South Minneapolis Target looted that evening.

After boarding up the store, Daye and colleagues spray painted the panels in part so others couldn’t. They filled the panels with messages in support of George Floyd. One message said, “stop looting.” Several Cedar-Riverside businesses also had signs in their shop windows, including Acadia, a bar, restaurant and music venue. Owner Juliana Bryarly said she put up signs in the bar’s windows, several of which read “Justice for George” and “Black Lives Matter!!!”

Bryarly said that while the building owners may come and board up the windows, she wanted to show support anyway. While she said she thought the restaurant might get looted, she said she was not overly distraught over it.

At Palmer’s Bar, the words “Black Owned Business” were written on wooden boards placed over the dive bar’s windows and doors. The Red Sea Restaurant and Bar was still open at around 6 p.m., although co-owner Yohannes Zemedhin said they were watching outside for looters and also planning to place wood panels over the windows.

Hesen Shire, owner of Hamdi Express, said the looting and protests had driven away business.

“It they come, there is nothing you can do,” Shire said.

Numerous businesses in the Dinkytown area were boarded up to avoid theft: TCF Bank, Target Express, Dinkytown Wine & Spirits and Al’s Breakfast were among the shuttered properties.

“We are heartbroken by the death of George Floyd and the pain it is causing our community,” a press release from Target corporate headquarters said. “Our focus will remain on our team members’ safety and helping our community heal.” CVS Pharmacy and Walgreens in Stadium Village were also boarded up Thursday night, as was Surdyk’s Liquor & Cheese Shop in Northeast Minneapolis.

“For the safety of our customers and staff, we decided to take this cautionary procedure. We hope that everything will be back to normal and operating fine by tomorrow,” said Melissa Surdyk, an owner of Surdyk’s.

Audrey Kennedy and Max Chao contributed to this report.