The department is examining all possible options to reduce spending. 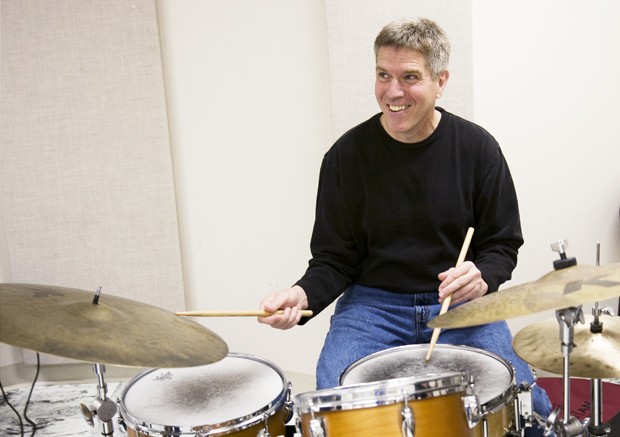 School of Music Teaching Specialist Phil Hey plays drums before his final jazz ensemble class Wednesday in Ferguson Hall. After teaching jazz for 20 years, he is in the process of losing his job due to budget cuts.

Phil Hey felt sick when he read the e-mail preparing him for the possibility that the job heâÄôs held for 20 years may not be available next semester. As a part-time jazz instructor for the University of MinnesotaâÄôs School of Music, Hey is one of several non-tenure instructors who could see next yearâÄôs budget cuts take their jobs. The e-mail, sent during spring break, was no final decision, but Hey said he feels certain he wonâÄôt be brought back. School of Music Director David Myers said the 2.75 percent cut levied on all University units for the 2011 fiscal year will force the school to cut costs wherever possible. He said the school realized âÄúthere arenâÄôt enough dollars to do everything that we have been doing.âÄù On top of laying off part-timers whose contracts are renewed by semester, like Hey, Myers said the school is examining everything from paper costs to the number of graduate students it can afford. Faculty workloads will have to be kept at their maximum, Myers said. âÄúWeâÄôre trying to do the very best we can, realizing that when the dollars to the University are cut, we have to make hard decisions,âÄù he said. Professor Dean Sorenson, director of jazz studies, said itâÄôs too early to speculate on the effects of the UniversityâÄôs financial constraints, but he considers HeyâÄôs situation unfortunate. âÄúIf it all happens the way that it is forecast to happen, itâÄôs going to be a great loss for us,âÄù Sorenson said. Myers said he does not anticipate a need to cut programs or enroll fewer students. Jazz studies does not offer a degree, which is one of the reasons the school can afford to trim there. Other programs take priority. Outside the jazz practice room, sophomore violin performance major Ian Snyder said he worries about the quality of education if the school has to shrink the number of instructors. âÄúSo much deals with one-on-one instruction,âÄù Snyder said. âÄúFor us to develop as musicians, we need the one-on-one attention.âÄù Snyder said he has received valuable education from adjunct faculty brought in from local orchestras to teach less common music types or instruments. He said, in his experience, these outside influences fill gaps where full-time faculty donâÄôt have time or experience. The anxiety over the uncertainty of the future is felt by everyone, Sorenson said. ItâÄôs not exclusive to the music school. âÄúThese are times unlike what anyone can remember,âÄù he said. âÄúEveryone that I talk with says this, whether theyâÄôre involved in the University or not.âÄù Hey has had a long career in drumming performance and jazz instruction. He has played on at least 110 CDs and boasts former students performing in Broadway plays and touring bands. He said he thinks learning jazz will prepare a drummer for anything. For a while, during the early stages of his career, Hey said he didnâÄôt have to teach because he made enough money performing. Now, though he still plays in about 150 shows each year, he said he barely scraped up enough to afford health insurance. In the fall, HeyâÄôs paycheck was cut in half because one of the classes he taught was reassigned to the full-time jazz faculty member. He said he âÄúhas a few feelers outâÄù looking for jobs in other cities where he knows friends, but the economic climate is similar everywhere and will make finding a job in higher education difficult. Mason Hemmer, a junior who plays trombone in one of HeyâÄôs jazz combos, said he thinks he gets a better jazz education from Hey than he would from somebody else because the professional drummer still performs regularly outside the University. âÄúNobody can do it the way he can,âÄù Hemmer said. With the UniversityâÄôs financial worries calling on more permanent, long-term changes, Hey said he knows jazz isnâÄôt being singled out for cuts. âÄúIâÄôm by no means alone,âÄù Hey said. âÄúThis is just the first round.âÄù -Taryn Wobbema is a senior staff reporter.