The University's student filming guidelines lay out a framework more restrictive for students than for outside media. 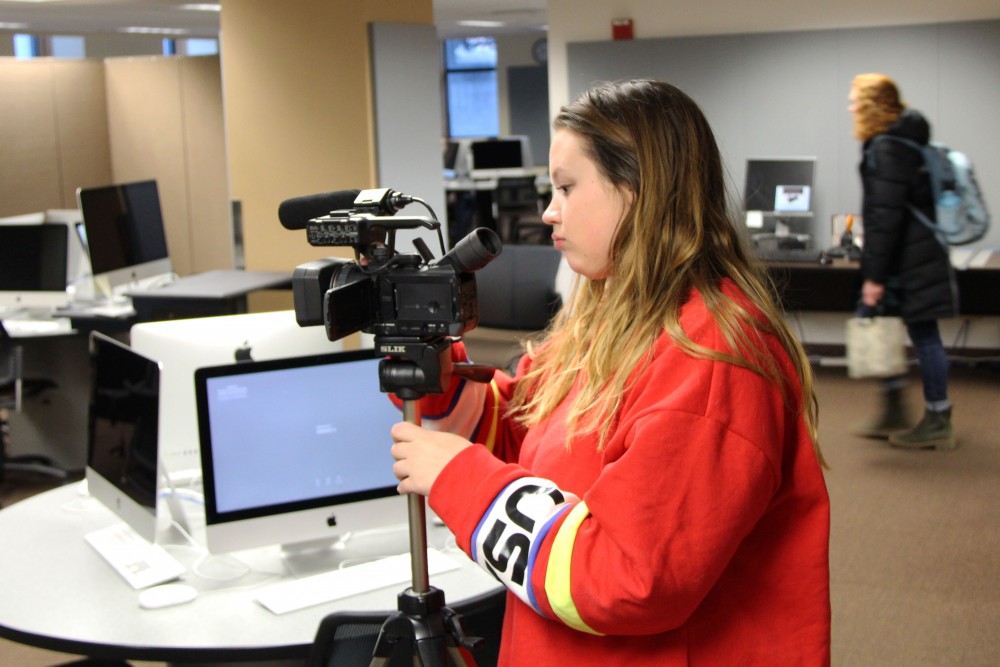 Kayla Finnerty sets up her camera on Wednesday, Feb. 19 in Murphy Hall. Finnerty is required to shoot video on campus for coursework in her digital content development and production for brand communications class.

The University of Minnesota carves out separate requirements for students to request permission before shooting video in public spaces on campus — guidelines that are more restrictive than those for outside media organizations.

The University’s Student Filming Guidelines include seven criteria that students “must follow,” such as requesting permission before filming in any location on campus. These stipulations are not necessary for outside media.

Fourth-year journalism student Jared Dooley wanted to do a video assignment last semester about trivia night at Coffman Union. When trying to shoot video and conduct interviews, he said he was told he wasn’t allowed to ask people if they would talk to him.

“I was confused, because you would think it’s an open sort of public area where everyone is allowed,” Dooley said.

After three weeks of working with his professor and Coffman workers, he finally received permission from a programs adviser at Student Unions and Activities to complete his assignment two weeks after it was due.

Scott Libin was Dooley’s professor at the time. Libin said his students have been encountering problems with shooting video since fall 2016.

“I thought we just had some overzealous mid-level employees of the University inappropriately enforcing what they thought were rules,” said Libin, a senior fellow in the Hubbard School of Journalism. “It turns out there’s also a set of published guidelines that I think are entirely inappropriate.”

“Nobody is advocating that any student ever walk into a classroom, for example, without permission of the instructor,” he said. “I don’t want students to get special privileges, but I also don’t want special restrictions imposed on them.”

Chuck Tombarge, chief public relations officer for the University, said the primary goals of the guidelines are to protect student privacy in places like classrooms and combat concerns that the use of University’s logos and branding makes videos seem University-produced.

“Our relationship with media is a little different than students doing student work,” Tombarge said. “It’s not possible for the student filming guidelines to be exactly the same as media guidelines.”

Nine of the 14 Big Ten schools responded to the Minnesota Daily regarding filming on campus, and none required a higher standard for students than outside media.

The University’s guidelines say students need to contact the University if they “wish to film, videotape or photoshoot outdoor locations on campus.”

Tombarge said they always prefer that outside media reach out to University Relations before coming to campus, but it is not a requirement. He also said the student guidelines are often flexible.

“Our goal here is not to get in the way of student learning,” Tombarge said. “It’s important to have the guidelines to make sure we’re balancing the access with protecting the students.”

Christopher Terry, assistant professor of media ethics and law, said the University’s guidelines may not be legally enforceable and setting separate standards for students may be problematic.

Although privacy is important in a classroom, Terry said, “There is no reasonable expectation of privacy in a public space,” such as in common areas.

Libin said that regardless of their legal enforceability, students will often stop shooting video if confronted.

“What’s enforceable is what works,” Libin said. “You’re encountering a 20-year-old student who’s never been in this situation before.”

University Relations is currently reviewing these guidelines for clarity with the Office of the General Counsel.

Dooley said his experience was frustrating, but he also learned more about his rights as a journalist.

“There is no reason I shouldn’t have been able to shoot in there,” he said.

J.D. Duggan contributed to this report.