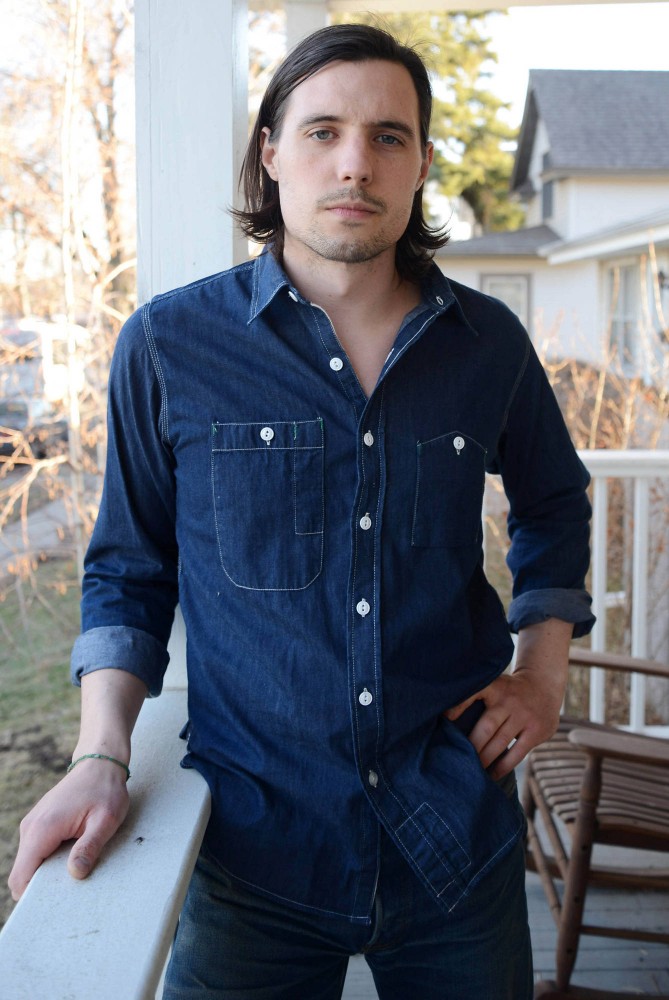 Acoustic musician Sam Cassidy at his home in Minneapolis on Tuesday.

Blue-collar is all Sam Cassidy knows.

The Minnesota-raised singer-songwriter picked up the guitar over a decade ago, but spends his days as a cabinetmaker.

“[When I’m an old guy] I’ll probably be making furniture alone in a garage somewhere,” Cassidy said. “My dad was a tile-setter growing up … you sort of write what you know.”

In his songs, Cassidy showcases the beauty of normal living, creating complex characters and conveying their perspectives through the lyrics and music tone.

“That’s what I’m talking about,” Cassidy said, pointing to a mascot outside spinning a sign that advertised taxes. “You can’t judge that person just because they’re spinning a sign; maybe they really love that.”

The sensationalized, personal stuff is not Cassidy’s goal, he said. He aims to bring everyday life to his lyrical content and tell stories from a narrative perspective that puts listeners in the shoes of different characters in his music.

“I think everyone has some story to tell; whether you work 60 hours a week or don’t have a job,” he said. “It’s really easy for me to sound whiney and ‘poor me’ when I’m writing about myself. Nobody wants to hear that. So to be able to take myself out of the equation I think is more interesting [for the audience].”

Cassidy’s music — described as folk and “blue-collar rock” — has obvious classic rock influences like Tom Petty and Bruce Springsteen, but he draws lyrical inspiration from hip-hop poets like Kendrick Lamar.

The songwriting style is consistent, but the musicians performing with Cassidy get switched up. He plays with two different bands: Red Daughters and All Night Canyons and rotates them based on their availability. He tries not to advertise which band he’ll be playing with before the show.

“I think I might have [my dream collaboration]. The dudes who play on my record [“Debts”] are really top-notch. I don’t think I’d pick anybody else,” Cassidy said. “I like to introduce all my band members as much as I can, so there’s usually a pretty corny band introduction that happens mid-song. So you can expect me trying to embarrass everybody while embarrassing myself.”

Charles Murlowski of Red Daughters — a band of Cassidy’s old chums from his hometown Coon Rapids — said the musical chemistry between Cassidy and Red Daughters was second nature.

“He doesn’t want anything to sound forced, so he gives us a lot of space to do what we’re going to do. He’s not too strict,” Murlowski said. “He’s the dictator, but he’s a nice dictator.”

Producer, mixer and engineer Brett Bullion has worked with various artists, including Caroline Smith and Bon Iver, but said Cassidy really taps into the spirit of Tom Petty and Neil Young.

“The sound in some of his songs just reminds me of an oak tree. You look at it and you’re like ‘Oh it’s an oak tree; I’ve seen oak trees,’ but if you think about it, it’s still nice to see oak trees,” Bullion said. “He’s a great songwriter.”

Murlowski said Cassidy isn’t putting on any airs either.

“He’s not being someone he’s not. He’s not like wearing a cowboy hat and spurs and pretending he’s an old Westerner. He’s just an honest, hard-working guy who writes songs,” Murlowski said.

In addition to having the oak tree sound, Cassidy has the personality of a koala.

“He’s a sleepy guy. He likes snacks. He’s always working on something, but he’s also got a wild side that not too many people know about,” Murlowski said.