City officials are considering plans to convert the Bunge tower into apartments. 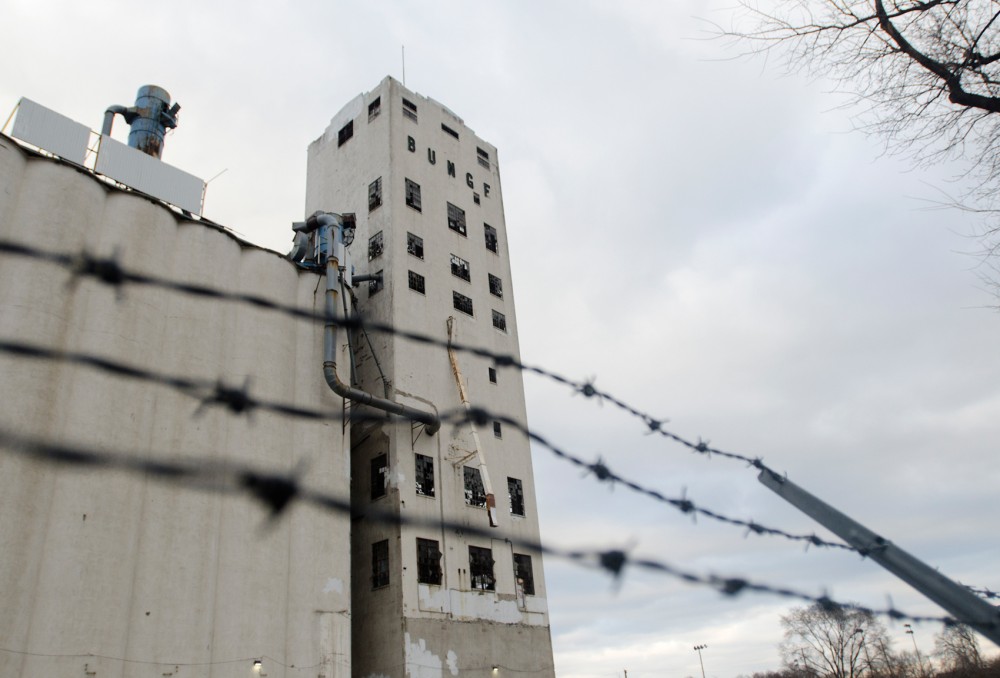 The abandoned Bunge Grain Elevator sits in Southeast Como on Tuesday. The building may be partially demolished to build artist housing, while preserving the tower and part of the silos.

Benjamin Farniok
After years of uncertainty, local property owners hope to renovate a Southeast Como landmark.
Bunge Elevator Complex owner Project for Pride in Living wants to build an apartment building on the site after owning it for more than a decade. A Minneapolis city commission heard from developers and planners about the building on Tuesday.
Preserving the building was a major concern for the PPL, said Mary Novak,  senior project manager for the company.
“Ideally, we’d like to keep that tower because it’s an icon. It’s an icon, I think, for Minneapolis and for sure for Southeast Como neighborhood,” she said.
The building has stood over Como since the ’30s, carrying and storing grain that was frequently loaded onto trains on the nearby railroad in years past.
Novak said the Bunge property has been partially developed since, and the tower would have been demolished if a deal with a private contractor hadn’t fallen through in 2006. Now, PPL has decided to develop the site on its own.
“At this point it looks like, for it to be developed, it’s got to be PPL,” she said.
The group wants to demolish the grain silos next to the tower to open up the space.
But before any ideas can be put into place, the city’s Heritage Preservation Commission must first approve any demolition, Novak said.
The HPC considers Minneapolis sites’ historical values and determines whether plans can go forward on potentially historic sites.
She said the current plans are preliminary and that the group hopes to use city grants, tax breaks and typical loans to finance the project.
One potential idea is to create artist housing, where people can stay for cheaper than average prices, which would also allow the project to receive more city grants.
The proposed project features a six-story building for artist housing and a three-story building with student and family housing. The two buildings would be connected by the main Bunge tower.
According to city documents, the proposed demolition would destroy enough of the site to render it ineligible for the National Register of Historic Places.
At the meeting, city planners said they weren’t opposed to the plan but would have to wait until a full staff report is prepared over the next two weeks.
They also said they were surprised by how much of the building would be preserved but said increasing the height of the taller apartment building might better match the spirit of the old silos.
The plan will likely be tweaked significantly before officially going forward, Novak said.
The building plan was also discussed at a Southeast Como Improvement Association board meeting the same night.
Wendy Menken, president of SECIA, said she was pleased the proposal had some variation in the type of housing, departing from large apartment “mega-dorms” in nearby
Dinkytown.
Further expansion of solely student housing was a concern discussed by other SECIA board members as well.
“The University is already building two other living complexes, and they haven’t announced they are expanding their student enrollment,” SECIA board member Joan Menken said. “Who is going to live there?”
In addition to the housing development, Wendy Menken said she wanted to see some creative uses for the tower, like a climbing wall or a restaurant.
“The tower has one of the best views of the city,” she said.
Delete Image
Align Left
Align Center
Align Right
Align Left
Align Center
Delete Heading