Head coach Jerry Kill, however, was hardly in panic mode; the Gophers are nursing plenty of bumps and bruises this spring. 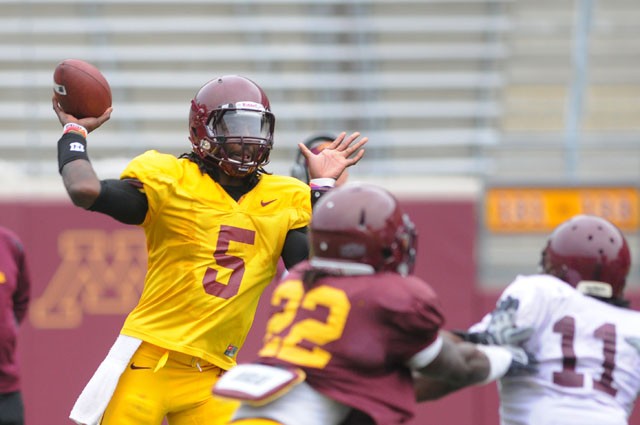 Minnesota wide receiver DaâÄôJon McKnight limped around the field with a bag of ice around his left knee after injuring it midway through practice Tuesday.

Although head coach Jerry Kill didnâÄôt yet know the extent of the injury to the teamâÄôs top pass-catcher from last season, he said itâÄôs still too early to start worrying about whoâÄôs hurt.

McKnight, who caught 10 touchdown passes last season, went down during an 11-on-11 drill. He lay on the ground for a couple minutes before being helped up and hitting the deck again. After being helped up a second time, he walked around fairly well for a while but sat out the remainder of practice and had a noticeable limp afterward.

With McKnight gone, other receivers had a chance to shine, and junior transfer GeâÄôShun Harris took advantage âÄî albeit in a brown âÄúLophersâÄù jersey. Harris made two great catches in the second wave of 11-on-11 drills, including a grab with safety Kim Royston all over him.

Harris and A.J. Barker, also in brown Tuesday, have looked good at times, but McKnight and freshman speedster Marcus Jones have been the two standouts in spring ball thus far.

As for who the third-best receiver could be next season, former receiver Troy Stoudermire didnâÄôt hesitate.

âÄúBrandon Green,âÄù he said. âÄúHe could definitely do damage. He has great routes, nice speed and he can jump. As soon as he gets healthy heâÄôll be back out here doing the same thing he did two years ago.âÄù

Green, a redshirt junior, has been sidelined with a groin injury in spring practice. He received a medical redshirt last season because of a knee injury, but in his first two seasons he caught a combined 41 passes for 591 yards and two touchdowns.

Junior wideout Matt Kloss returned to practice Tuesday and made a couple sensational grabs, including one in double coverage from Tom Parish.

Collado looking at the pros

Collado is still finishing his marketing degree and has a job offer from a consulting firm in Chicago but is still chasing dreams of playing professional football. He said the Toronto Argonauts (CFL) invited him to minicamp in Orlando on April 26, and he will also work out for the Oakland Raiders and Cincinnati Bengals.