Kelly Doran is slowing down as the local housing market continues to expand. 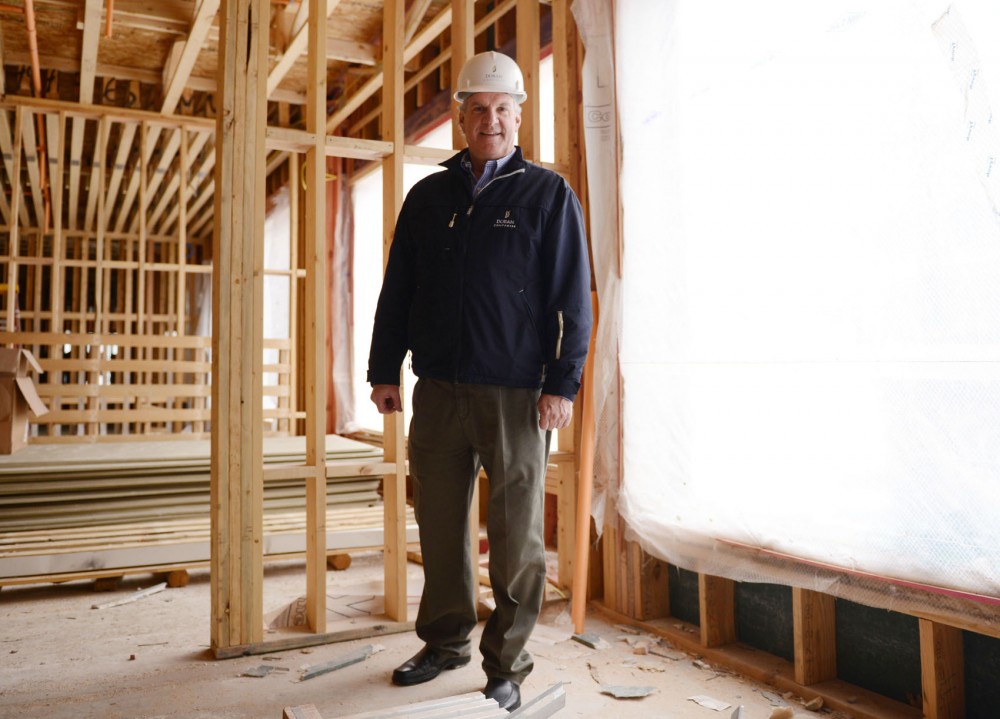 View an interactive map of planned housing developments around campus.

He said he has invested $150 million in high-profile, luxury apartment buildings like Sydney Hall, 412 Lofts and the upcoming Bridges complex.

Since Doran Companies  opened Sydney Hall in fall 2010, the campus area has undergone a surge of luxury student housing development that continues to accelerate.

More than 1,700 units will be opened by Doran and other developers in the next two years alone, redefining Dinkytown and Stadium Village.

After opening his largest complex yet — The Bridges in 2014 — Doran said he will scale back his development in the area.

By fall 2014, Doran will have added almost 900 units to the University District.

Doran Companies kick-started the housing trend when it bought a parcel of land in Dinkytown from the University of Minnesota to build Sydney Hall.

Before then, Doran said the University was crippled from a lack of quality student housing close to campus.

“I think he had a great idea to improve [housing],” said Robert Bruininks, who was University president at the time. “He was one of the first, and I think he was, in that sense, a visionary.”

The sale of University-owned land to private investors is rare, but in that case, Bruininks said the school greatly benefited from the project.

“It’s good for students … [and] for the business communities that surround our campus, and I think it makes the University a much more attractive place for students,” he said. “It helps everyone if the quality of housing is strong.”

Doran said the thousands of upcoming units are catering to a “pent-up demand” from international and commuter students, as well as students looking to live closer to campus.

Because he attaches his name prominently to each development, the Doran name has become synonymous with the housing boom.

The connection is completely intentional, Doran said, because running a local, family business also changes his approach to work.

“It makes a difference when your name is on the door,” he said. “You want to make sure you’re putting your best foot forward.”

Doran said he would only consider developing a new student housing project if a “compelling opportunity” presented itself.

He is currently developing a non-student, high-end apartment project, Mill and Main, across the river from downtown Minneapolis.

He is set to cease development in the campus area at a time when some worry the luxury student housing bubble may burst.

The average vacancy rate for east Minneapolis rose less than a percentage point from 2011 to 1.7 percent at the end of 2012, according to the city.

Daniel Oberpriller, president of competing development company CPM, said he feels the projects set to open in 2014 will be safe.

“There is no market that is infinitely deep, and our housing markets of frequent years have taught us that very well,” she said. “There will be an end. Nobody wants to be left holding the bag.”

Thirty years ago, Doran was commuting to and from campus and working to pay his way through Carlson School of Management. During his years earning his MBA at the University, he never lived on campus.

“I came from a pretty modest upbringing — I was raised by a single mom. I had to put myself through college. I worked hard,” he said. “Nothing was ever handed to me.”

Now, he said he has donated hundreds of thousands of dollars to the University and millions to charities and political causes — as well as served on the boards of many industry and nonprofit organizations.

Last year, Doran fought criticism from the North Central States Regional Council of Carpenters for his use of non-union laborer on Mill and Main.

Doran responded by saying that 93 percent of the project’s labor was made of union workers. He said he would rethink his use of union labor because of the dispute.

Doran worked in finance and development until 2005, when he took a hiatus and ran for public office, first in the 2006 race for U.S. Senate and then for Minnesota governor as a Democratic-Farmer-Labor Party candidate in the same year.

He pulled out of the race in March 2006 because of family issues and lack of experience.

“I was naively thinking I could make a difference in the political world,” he said. “It was an interesting experience — I don’t regret doing it.”

After his brief foray into politics, Doran said starting his own company was a natural next step.

John Wodele, who ran Doran’s campaign and now serves as vice president of marketing for Doran Companies, said Doran has found success through his drive and intensity.

That passion is essential when running a development, management and construction company and overseeing every creative, practical and financial detail.

It’s the kind of intensity that can only belong to someone who says his greatest pet peeve is asking for something more than once.

And it’s a feeling that his employees sense, which Wodele said creates a deep-seeded loyalty and driven work ethic in the office.

“People don’t produce their best unless you create that positive intensity,” Wodele said. “You have to perform or you’re not going to be comfortable around here.”

Doran said he felt what sets his company apart is his attention to detail and personal touches.

Sydney Hall is named after his 12-year-old daughter. On the corner of 412 Lofts is a peace garden in memory of his sister Jean, who died of cancer in 2010.

Fellow prominent University-area developer Oberpriller said although he isn’t close to Doran personally because of their frequent competition in the industry, he still calls him every few months for advice.

“We’re not like buddies where we hang out, [but] he’s an industry adviser,” he said. “He knows what he’s doing, so if you have questions … he’s very willing to talk.”

Together, Oberpriller said, the two are the largest land purchasers in the area, so whenever a site opens up, they end up head to head. Among the fought-over land is the site of Doran’s Bridges project.

Kelly Doran’s son, Kramer Doran, who is a University sophomore in communications, said while his father never brought work home with him growing up, that intensity is simply part of who he is.

“When he gets back home, he’s just kind of relaxed and hanging out,” he said. “[But in serious situations] that intensity comes right back. It’s really the same person; either he’s going 10 miles-an-hour or a hundred.”

Len Pratt , a close friend, said Doran dedicates himself in both his work and his personal life.

“He puts his mind to it, and I’ve seen very little difference in how he approaches his work and his personal life,” Pratt said. “He’s a contributor, not just a taker.”

As for the future of the company, Kelly Doran said he hopes one of his sons will consider taking over the business he built.

“I can’t imagine not doing what I do,” he said. “I’ll have to live forever, I guess, because I won’t be able to retire.”