The hustle continues for the dark horse 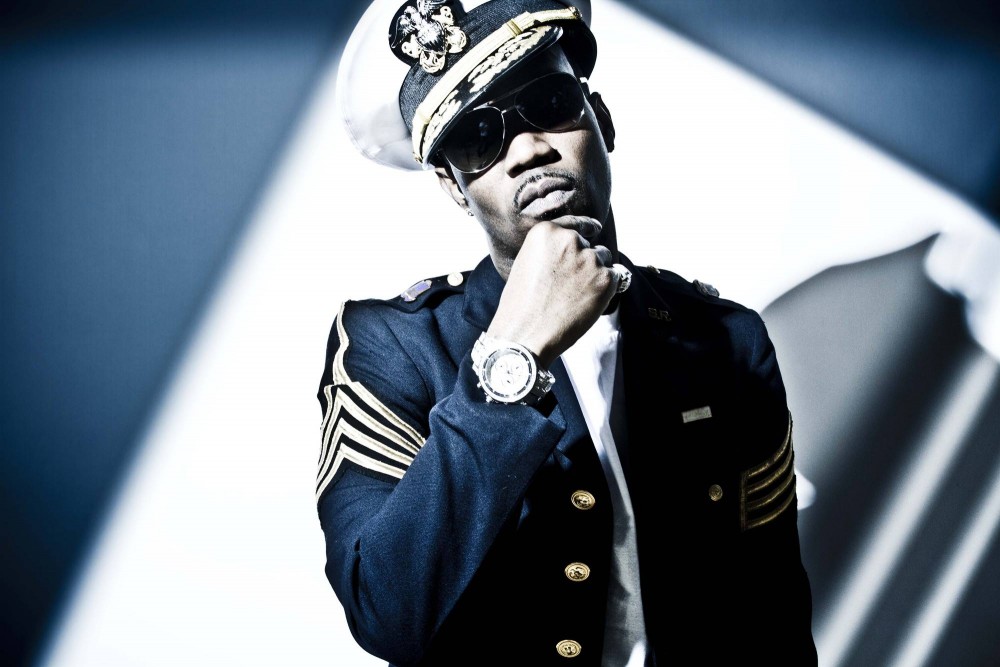 Though not the most creative rapper, Juicy J has magnificent talent for devising and following a blueprint guaranteed to churn out syrupy, debauched club bangers. He’s famous for his player persona and winning an Oscar with the Memphis, Tenn., group that he co-founded, Three 6 Mafia.

Oddly enough, Juicy J is reserved in conversation, almost a separate entity from the rap identity he inhabits. He delivered the same motivational answers to questions thrown at him, expounding ad nauseam on his work ethic and how much he loves making music.

What’s been the craziest place to play [on tour] so far?

JJ: Everywhere’s been crazy, man. Boston, Massachusetts, was super turnt up. I walked on the stage and did two songs and some dumbass pulled the fire alarm, and we had to evacuate the whole damn club. They didn’t let anybody back in.

Which city knows how to party best?

JJ: Every city. I feel like these are the days where people are trying to enjoy themselves, getting tripped out and not worrying about anything. The music is keeping our minds off so much tragedy and chaos going on in our world, so people turn to music to get their relief.

What else is there to do besides party?

JJ: I’m still working. I don’t party everyday — my concerts are like a party, but I’m all over my studio working. I’m doing a lot of stuff with Dr. Luke. I’ve got movie companies ringing my phone like crazy.

You have movies going on?

You can’t tell me that?

JJ: I can’t tell you the secrets. It’s secret.

I’ve heard that your new album, “The Hustle Continues,” is going to be a less star-studded affair. How’s it coming along?

JJ: It’s coming great, man. I’m not doing a lot of features — it’s going to be a lot of me on it. It’s a crazy album; I’ve put a lot of hard work into it. It means a lot to me because I’m talking about my family of six people living in a two bedroom apartment, coming up to where I am now, from straight broke and poor: no food in the refrigerator, to steaks in the refrigerator. It’s an inspiration for anybody who wants to be in the music business, anybody who felt like they have no hope in life. They can listen to this album, enjoy it, and they can understand and get a message from it.

And now you have enough money to give out a twerking scholarship, too.

JJ: I’ve been giving out twerking scholarships, I’ve been giving out Jordans at the shows, throwing money in the crowd. I feel like I’ve been doing so much in my life that it’s time for me to start giving back, to start helping other people out. Whatever I can do to give someone some knowledge or inspiration, that’s what I want to do.

How did the twerking scholarship start? At one point I thought it fell through, but it actually happened recently.

JJ: It wasn’t a twerking scholarship. A lot of people didn’t read the fine print. It was a scholarship saying “submit a video stating why you deserve a scholarship.” There was a young lady — 19 years old, a single mom — and she read the instructions, and she won.

JJ: Yeah. I probably had about 80 percent of people just twerking.

What’s the biggest difference between your work with Three 6 Mafia, your work as a solo artist and with Taylor Gang?

JJ: I’ve grown. I don’t do the same things I did back in the day. It’s hard for somebody to be the same. The music is similar, but it’s a little bit different as well. A lot of the music today — a lot of the flow and the beats — sounds like Three 6 Mafia. The difference, as far as me being an OG in the game, a legend in the game, [is that] I don’t talk about the same stuff I used to do when I was 23. But I’m still enjoying my life. I’m in a great atmosphere. I’m blessed to have a great team around me.

Where do you get inspiration for your writing and production? Do you write what you know and play what you feel?

JJ: That’s pretty much it, man. I love making music, so I’ll write a verse for five days. I’ll make sure that verse is the best verse I ever laid. I’ll rewrite the verse — I’m a hard worker; I take my music very seriously.

How does your rewrite process go? What does it feel like to be dissatisfied with a verse?

JJ: If I feel it’s right, then I feel it’s right. If the verse is alright or cool, I’ll go back in again. I work hard, man — you got to come and hang out with us for about a week. You’d be like, “Man, these guys are partying, but they work their ass off in the studio. They work harder in the studio than anything.”

How do you handle the stress that comes with music?

JJ: I turn my phone off. Life ain’t good when you answer the phone all the time; the stress comes from the telephone. There’s a lot of gold diggers and a lot of petty people — stuff that don’t matter in my life. It comes with the territory. I have to turn my phone off to concentrate.

How do you connect and communicate with your fans?