Inside the Collyer brothers’ mansion 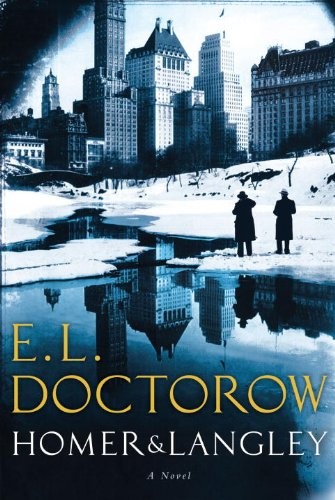 âÄúHomer & Langley: A NovelâÄù AUTHOR: E.L. Doctorow PUBLISHER: Random House PAGES: 224 LIST PRICE: $26 In 1947, New York City police received a call saying there was a rotting corpse in the Harlem apartment belonging to Homer and Langley Collyer, two elderly and wealthy eccentrics. Police went to investigate and found the decaying remains of blind, emaciated Homer Collyer, but no trace of his brother, the cantankerous Langley. What they did find, however, was a veritable museum of junk stashed in the brotherâÄôs large home, including piles and piles of newspapers, typewriters, more than 25,000 books and even a Ford Model T. There was so much stuff hoarded in the apartment that one could only navigate using very small, intricate pathways. It was there the body of Langley was discovered, suffocated under the weight of all the things he had so painstakingly collected, being eaten away by rats. It doesnâÄôt happen exactly like this in E.L. DoctorowâÄôs âÄúHomer & Langley,âÄù but heâÄôs based his luminous new book on their true story. The Collyer brothersâÄô story went down in history as a lesson for hoarders âÄî or a spooky parable for kids with messy bedrooms. Their tale was adapted for the stage, studied and written into novels, but none has done the hermit siblings quite the honor that Doctorow does. E.L. Doctorow is, at his core, the quintessential âÄúgreat American novelist.âÄù His body of work, from âÄúRagtimeâÄù to âÄúWorldâÄôs Fair,âÄù dips into the catalogs of history for inspiration and emerges luminous. Each word and sentence has been dug up from the annals of Americana and dusted off very gently by Doctorow, whose masterful hand still retains the patina of the past. With âÄúHomer & Langley,âÄù Doctorow plays with history and sets the pair as witnesses to nearly every huge American event. Told in the voice of the blind, sensitive Homer, Doctorow uses the brothers to tell not only their own story but the story of our country, as well. They fight in WWI, befriend a gangster during the Prohibition, hold âÄútea dancesâÄù to lift spirits during the Depression, lose a loved one in WWII and even invite hippies into their home during the 1960s. Though the real Collyers died in the 1940s, DoctorowâÄôs storytelling is so well crafted and thorough that the reader forgets all the inaccuracies and instead falls dreamily into HomerâÄôs tale. Though the Collyers basically shut themselves off from society after WWII, itâÄôs their onlooker status that makes Homer such a succinct narrator. As an outsider only witnessing history from a maze of junk compiled by his brother, Homer picks up on the deeper meaning behind loss, love and longing. DoctorowâÄôs prose is beautifully sad, as though Homer is recounting his life story from some far away reverie. Or perhaps the voice comes from somewhere beyond death, beyond the masses of newspapers Langley brings home in the middle of the night, beyond the rubbish theyâÄôve amassed. Toward the end of their lives, the introspective Homer begins to feel the weight of time and possessions; he is lonely and secluded from society, friendship and love. Doctorow embodies his melancholy in gorgeously crafted sentences: âÄúAwake, I am in a continuum with my dreams. I feel my typewriters, my table, my chair to have that assurance of a solid world, where things take up space, where there is not the endless emptiness of the insubstantial throughout that leads to nowhere but itself.âÄù âÄúHomer & LangleyâÄù is a true American tale, rendered as both a legend and an innately human story by Doctorow, a greater treasure than all the CollyersâÄô bric-a-brac combined.