The Forensic Science Club put its skills to the test to solve a fake murder mystery. 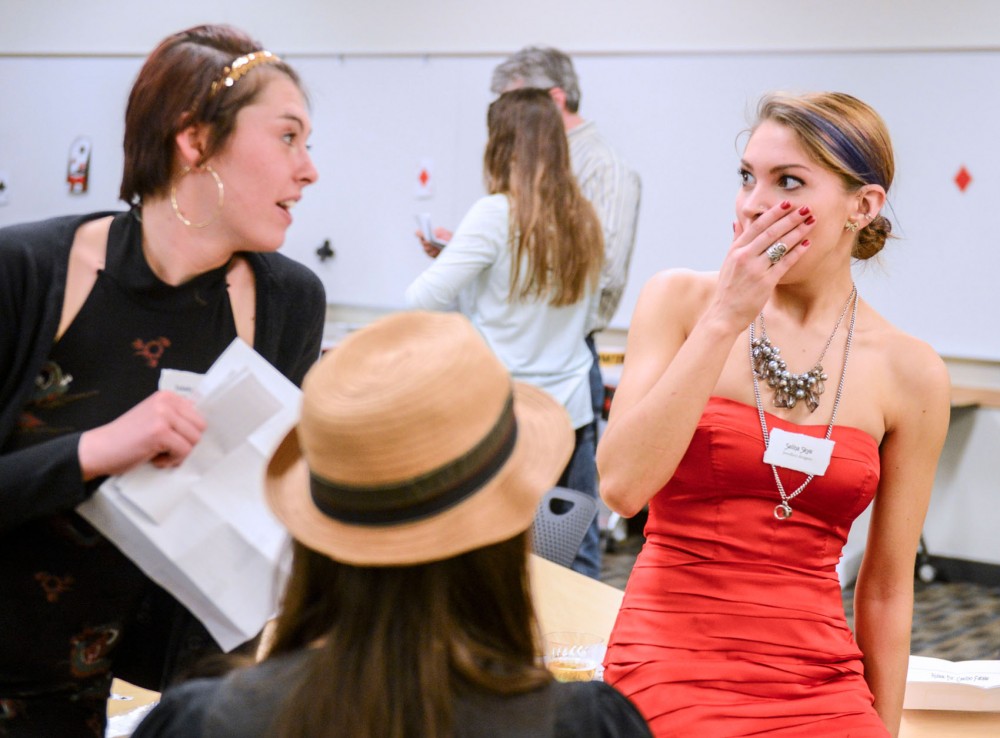 In the basement of Moos Tower on Friday night, Alex Tsai had to find out who murdered her boss, an award-winning physicist, before the killer took her out next.

This plot was part of the University of Minnesota Forensic Science Club’s annual murder mystery dinner. While the club itself is a resource for students who are seriously considering a career in forensics, it hosts the event to recruit new members and have some fun.

Unlike a real crime scene, attendees were able to take a 10-minute break from their murder investigation to eat cake.

Tsai, a physiology sophomore, was more interested in playing out a plot from one of her favorite TV shows like “CSI: Miami” or “Bones” than in learning how to become a forensic scientist. But after defending her innocence to event attendees trying to pin the murder on her, she said she might join the club.

Biology professor Kathryn Hanna helped form the club in 2002 and said it’s meant to help students get perspective on the types of forensic jobs, see the kind of work they’d need to do and help them network with professionals.

“I saw a lot of students coming to the U that were interested in forensic science as a career, but we didn’t have any majors,” said Hanna, who is also the faculty advisor for the club.

Club co-president India Addington-White said it’s “crazy” that the University doesn’t have a forensics program since the field can be applied to so many current majors.

“Forensic science is in definition the establishment and discovery of facts in relationship to criminal and civil law,” Addington-White said. “So, that’s so broad.”

A degree program could open up job opportunities for students interested in forensic psychology, forensic nursing, forensic dentistry or anything related to working in a forensics lab, she said.

But Hanna said the University doesn’t exactly need a program because forensics is such a broad field.

“I encourage students to get a little broader science degree because that gives you more options,” she said. “[With] a degree in forensic science, you’re sort of limited in your career options.”

Hanna said most crime labs don’t require a forensic science degree, but are looking for students with any science degree who possess good laboratory and analytical skills.

“If you go into a DNA lab, you’re doing the same kind of DNA work that we’re doing here at the University, just with different samples,” she said.

Psychology senior Hami Lee, who joined the club two years ago, said she’s been interested in forensics as long as she can remember. She said she wants to become a forensic psychologist, or someone who studies the minds of criminals.

As a freshman, she said, the only resource she could find on campus about forensics was the club, which helped her get an internship last summer and helped her realize she wants to work with children who have Post Traumatic Stress Disorder whose parents are criminals.

Many former members either have gone on to graduate schools with forensic programs or have obtained jobs at places like the Minnesota Bureau of Criminal Apprehension, Hanna said.

During the first week in March, the group will also learn how to use a fingerprint kit and meet a blood-stain pattern analyst, or “real-life ‘Dexter,’” she said.

Hanna said curious students can come check the club out without feeling pressured to join.

“If they come in and find out they’re not into forensic sciences, fine,” she said. “That’s what they need to do.”