Minnesota will travel to Las Cruces, N.M., this weekend. 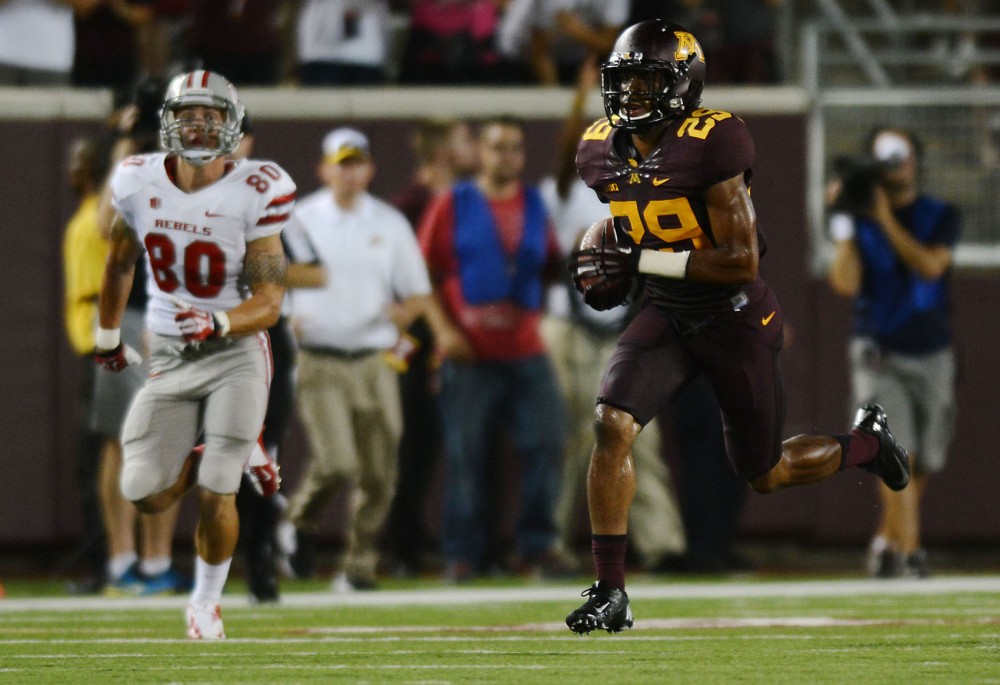 Gophers defensive back Briean Boddy-Calhoun returns an interception for a touchdown in the second half against Nevada-Las Vegas on Thursday at TCF Bank Stadium.

In the fourth quarter of the Gophers’ 51-23 win over Nevada-Las Vegas last Thursday, junior cornerback Briean Boddy-Calhoun intercepted a pass and returned it 89 yards for a touchdown.

Boddy-Calhoun slowed down considerably by the end of the run but still managed to cross the goal line for the score.

“I was pretty tired,” he said after the game. “I actually got subbed out two plays before that and went back in.

That exhaustion was amplified across the team by the 90-degree heat at game time. This Saturday against New Mexico State, the Gophers will face yet another environmental challenge.

The game will likely be nearly as hot, with a high near 90 degrees, but the altitude — not the heat — could present the biggest challenge to players.

At higher altitudes, the air feels thinner because there are fewer oxygen molecules per volume of air. This can make it difficult to breathe.

That difference could spell trouble for the Gophers, going up against a team that’s acclimated to the high altitude.

“Drinking a lot of water [is important],” senior defensive lineman Ra’Shede Hageman said. “As simple as it is … that’s what’s going to help us stay in the game in the third or fourth quarter.”

The Gophers displayed their depth in the game against UNLV amid early-season injuries and the environmental challenges.

They’ll need that again this weekend.

Boddy-Calhoun started in place of junior cornerback Derrick Wells, who has been nursing shoulder and hamstring injuries. Kill said at his press conference Tuesday that Wells practiced this week, and he appears ready for Saturday’s game.

In its game against UNLV, Minnesota showed that it possesses depth on the offensive side of the ball as well.

Freshman tight end Maxx Williams filled in and scored a touchdown after junior tight end Drew Goodger went down with a minor injury.

Kill said Goodger practiced Monday. Williams said Goodger is a “tough kid” and is expected to suit up against NMSU.

Junior running back Donnell Kirkwood injured his ankle in Thursday’s game, too, but has been attacking rehab, Kill said. He is not in a boot and Kill said he’s walking fine.

Though injuries have started to pile up amid the depth on the team, Kill said Minnesota will not waver from its game plan Saturday.

“That’s part of football. We’ll put the next man up,” he said. “You just hope the next guy up does a good job.”