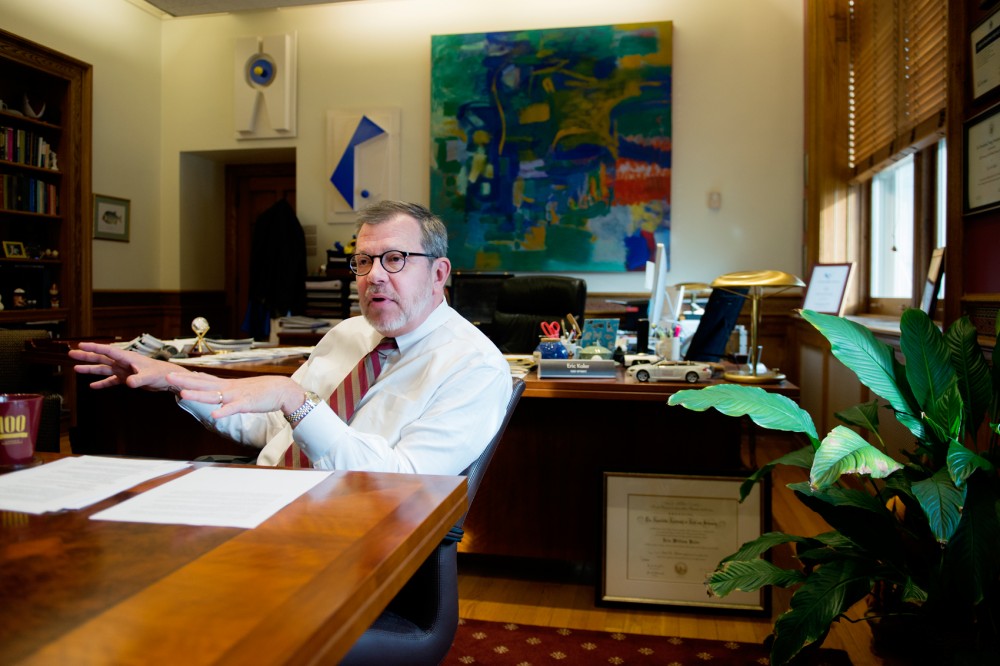 University President Eric Kaler fields questions for the Minnesota Daily inside his office in Morrill Hall on Tuesday.

Brian Edwards
The University of Minnesota President recently sat down with the Minnesota Daily for the first time this school year.
In the latest installment of Kickin’ It with Kaler, he talked about the University’s recently approved Athletes Village, the new Bell Museum of Natural History and the affirmative consent policy.
Sigma Alpha Epsilon was recently suspended by the University for “more likely than not” violating student conduct codes regarding hazing and underage drinking. Are you concerned that this is happening at other fraternities and sororities?
I personally don’t believe that it is worse in fraternities or sororities, but there certainly are events that occur that we are concerned about. … We are concerned about underage drinking across campus.
The University is currently in the middle of an investigation by the U.S. Office for Civil Rights for Title IX compliance issues. … Do you think the University’s agreement to build the new track and field facility on the East Bank will ease some of these Title IX concerns that may or may not exist?
Whether or not they exist, or simply perceived to exist, we think this is a strong statement, a positive statement, for the track and field program.
The University is going to request $230 million, which includes $100 million for Higher Education Asset Preservation and Replacement projects from the state Legislature this year for building projects for the 2016 capital request. Why should the lawmakers fund the University’s request?
We can’t deliver on our mission of educating, researching and delivering outreach using 19th century buildings in a 21st century institute.
After some initial concerns, the Board of Regents delayed the University’s affirmative consent policy from being approved … [and] it was then implemented at the start of the school year. Do you think that extra time allowed the University enough time to address concerns that the board and public might have had about the policy?
I do think some of the definitional issues got sharpened by that conversation, and that is a good thing.
Regents say moving the Bell Museum, which had schematic designs approved in September, to the St. Paul campus will act as a gateway to the St. Paul campus. What ways do you think the museum is going to do this?
[It] will bring people to the St. Paul campus that have perhaps not been there before. … You may want to stop at the new bee laboratory and see what is going on there. You might want to stop at the Raptor Center and look at some really pretty amazing birds. … Adding this will make [the St. Paul Campus] more noticeable.
Some faculty members want to limit data requests concerning University research, saying access to that preliminary data can damage research before it is fully completed. … What are your thoughts on protecting research from data requests?
The people doing the research deserve the right to be able to complete their research, to have preliminary findings, to go back revise and check — that’s just part of the scientific method. Having to turn over preliminary information, I just think is a really bad idea.
Whose Diversity? students held a protest in this office in February and refused to leave because of what they saw as issues with diversity at the University. The students finally left after being arrested. The city dropped criminal charges pending a probationary period, but the University has continued to pursue student conduct code violations. … This month, more than 150 faculty members signed a petition asking the University to drop those violations. What are your thoughts on the petition?
I understand the desire to be lenient … but it was not a completely harmless protest. The people in my office were jostled, pushed and shoved. There was a lot of trauma and uncomfortable stressful feelings generated for people. … I think that’s an activity that should have some consequences.
Earlier this month, it was reported that several allegations of sexual assault, sexual harassment and retaliation involving members of the University’s football team surfaced [but were not investigated]. … Do you feel that there is a problem among members of the football team regarding sexual harassment and assault?
At the end of the day, our process worked for students who made the report. It was an investigation and a finding. I don’t sense that there is a broad spectrum of harassment activity going on in our football program.
[A] string of resignations and voluntary leave has attracted scrutiny over the thoroughness of the University’s vetting and hiring process for top-level administrators. Do you agree with these concerns?
I have asked Karen Schanfield and Joe Dixon to investigate the hiring process, and that’s being overseen by the Board of Regents and what should we have known, if
anything. I remain confident that the process was thorough.
I was digging through some past Daily coverage, and I saw there was a Halloween party at your house a few years ago and you and Karen dressed up as Abraham Lincoln and Mary Todd Lincoln. Do you have any costumes plans for this Halloween?
We do. And I would encourage people to come by Eastcliff at 5 o’clock on Friday, in costume, and they will get to see.
Do you have a favorite Halloween candy to pass out?
You know, I am a huge fan of Three Musketeers Bars, so those little Three Musketeers Bites. That’s some good eatin’.
Delete Image
Align Left
Align Center
Align Right
Align Left
Align Center
Delete Heading