Minnesota and Michigan State needed extra points in an extra set to decide the match. 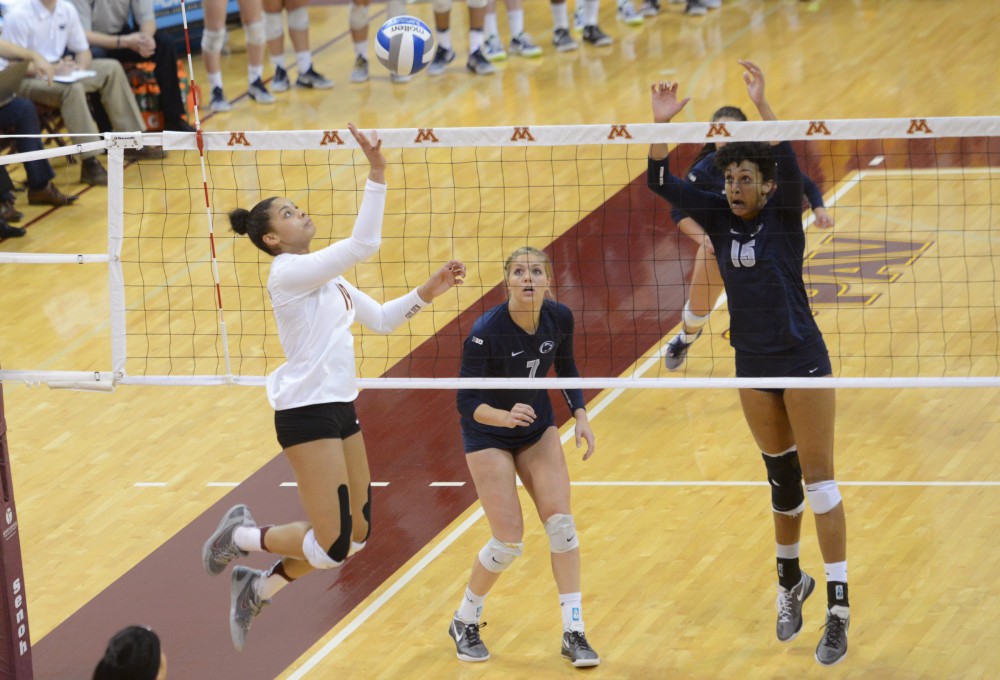 Freshman Alexis Hart jumps to send the ball over the net on Saturday Oct. 29, 2016 in the Sports Pavilion.

The tale of a high-tension, five-set match between two ranked teams doesn’t always see a freshman player as the hero.

Alexis Hart broke that mold for Minnesota Friday, and saved the Gophers from losing match point twice in a fifth set against Michigan State and stepped up to lead Minnesota with 20 kills to hit an impressive .419.

“One of the strengths of this team is that at different times it’s been different people [leading], but it’s always been someone, and tonight obviously it was Alexis,” said head coach Hugh McCutcheon. “Phenomenal performance in all phases.”

No. 2 Minnesota and No.13 Michigan State went to five sets on Friday to give Minnesota revenge from the first match the team played against the Spartans earlier in the season on the road, which ended in a loss.

The final set was back and forth throughout, with Michigan State pushing the set to match point twice.

However, the Gophers battled back both times, with their star freshman outside hitter, Hart, saving her team from a loss with kills both times.

Minnesota ended the match with three straight points and ran away with an 18-16 set and match win to keep its home unbeaten streak alive.

Minnesota pulled it together in the final set and hit .308, with a drive to win across the board.

Minnesota will play No. 18 Michigan at home Sunday at 1 p.m.

“It’s going to be a battle like tonight,” Hart said. “As long as we play like the Gophers team I know, we’ll be fine.”