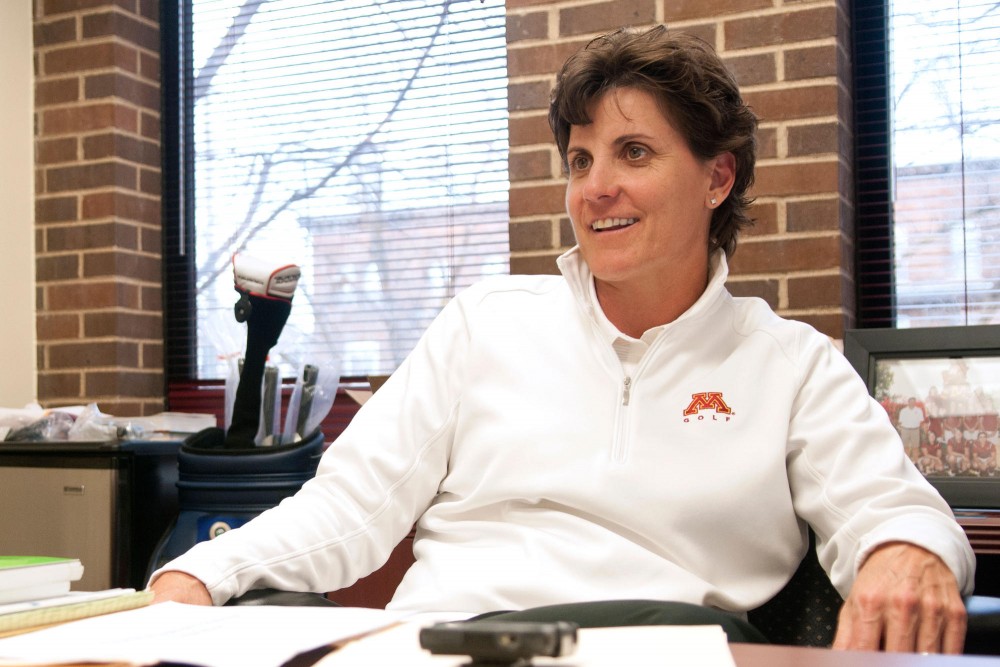 Michele Redman has found success at numerous levels of golf. After a 20-year professional career, she will now try her hand as head coach of the Gophers women’s golf team.

Redman played on the boys’ varsity golf team at Zanesville High School in Zanesville, Ohio, where she was one of the top two players on the team.

“We didn’t have a girls’ golf team at my high school so I had to play on the boys’ team,” Redman said. “I think I started realizing in high school that there was something there for me.”

Redman said she focused on playing tennis at an early age before her parents joined a country club and guided her toward the links when she was 11 or 12.

“I was actually a really good tennis player,” she said.

But as good as she was at tennis, she became even better at golf.

“I have really good hand-eye coordination, and I could hit the ball right away,” Redman said. “From that moment on, I was stuck with golf.”

After high school, she attended Indiana University and became a two-time All-American, earning All-Big Ten honors in all four years.

“I started taking lessons from [head coach Sam Carmichael] at Indiana the summer after I was recruited,” Redman said. “That’s the first time I won a junior tournament … so I just kept progressing.”

Redman said the guidance she received from Carmichael, who led Indiana’s golf team for 23 years, inspired her to become a coach.

“I was fortunate to go to a place where I had a really good golf coach, which is one reason I wanted to take this job,” Redman said. “Had I not had a great coach in college, I probably would have not gone on to be a professional.”

She followed her career at Indiana with a 20-year professional career that netted her two tour victories and $5.7 million in earnings.

She also represented the U.S. four times as a member of the Solheim Cup team. The Solheim Cup is a biennial tournament between golfers from the U.S. and Europe.

“There’s nothing better than that,” Redman said, adding that she was fortunate to compete at two familiar courses — the Interlachen Country Club in Edina, Minn., and the Crooked Stick Golf Club in Carmel, Ind.

Redman said she contacted the University of Minnesota twice in the past two years about the opening for head women’s golf coach. She got it the second time around.

Redman said that after her illustrious career, it wasn’t a tough decision to retire and become a coach.

“I’d been wanting to leave for a while,” Redman said. “I was tired of all the international travel — it’s nice just to be traveling here.”

Redman was quick to make a good first impression on Gophers players.

Carmen Laguna, who came to Minnesota from Spain, said Redman helped her make the transition to attending an American university and playing golf in a different country.

“You come to a new country and you don’t know anyone here. Your parents are back home, and it’s always good to have a person who you can talk to,” Laguna said. “She has been always there for me.”

Laguna is one of three international players on the team. Freshman Sarinee Thitiratanakorn and sophomore Banchalee Theinthong both come from Thailand.

Both Laguna and freshman Anna Laorr said that having a coach with 20 years of professional experience would help the team.

“I was so excited when I saw she was hired,” Laorr said. “I’m going to learn so much from her about course management and golf [in general].”

Redman said that her main goal for the team is for the players to enjoy themselves while golfing. She has also put an emphasis on academics, much like head men’s golf coach John Carlson.

“That’s really important to me,” Redman said. “I want every young lady that comes through this school to graduate with a degree. That’s my No. 1 goal right now.”

With a young team that consists of two juniors, one sophomore and six freshmen, Redman said another goal for this year’s team is to improve upon its performance from last season, when it finished sixth at the Big Ten championships and 19th out of 24 teams at the NCAA championships.

She said that within the next two or three years, she hopes the team will contend for a Big Ten title.

“We’re really young,” Redman said. “They’re all very eager to learn, they’re all great students, but I think the biggest thing for me was their willingness to learn and change and just try to get better at their games.”