Minnesota was upset by the No. 12 seed in Milwaukee Thursday afternoon. 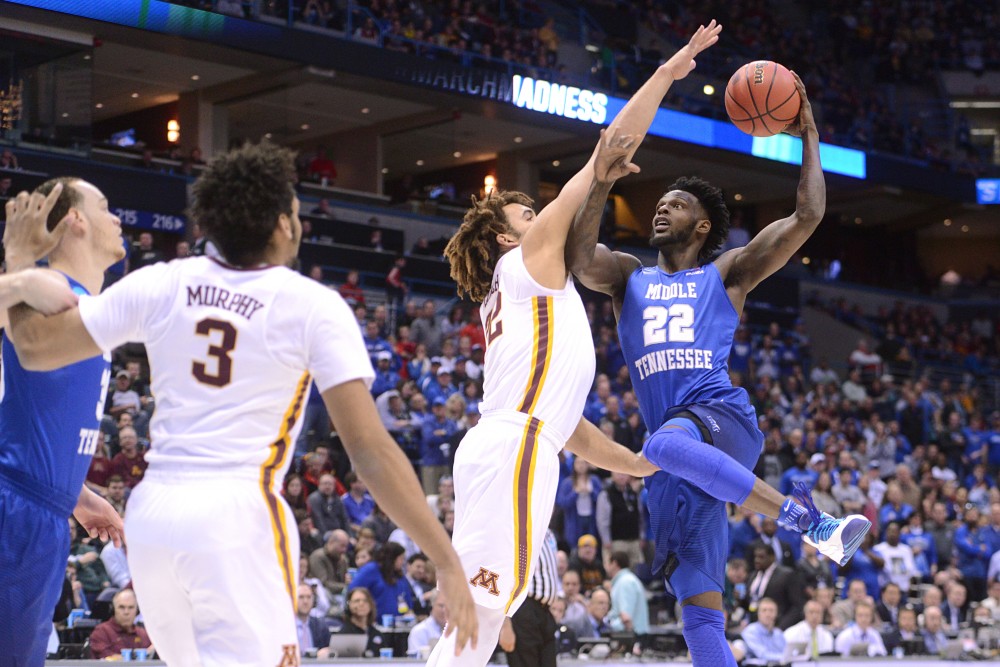 Before Thursday’s first-round game, no Gophers player on roster had ever played in the NCAA tournament.

But the Gophers — a team that won won 16 more games than it did the year — learned that experience matters in March, and Middle Tennessee State’s senior duo of JaCorey Williams and Reggie Upshaw showed why.

Upshaw and Williams combined for 32 points, as the Blue Raiders pulled off a 81-72 win over higher-seeded Minnesota Thursday at the Bradley Center.

“They didn’t seem affected by anything,” said head coach Richard Pitino. “None of it really felt a whole lot different… We just ran out of gas.”

After trailing by 15, a 9-0 run helped the Gophers come within four points of the Blue Raiders with six minutes to go in the second half. Guard Amir Coffey scored four points during the run and finished with 17 points and four assists.

Williams and Upshaw put the game out of reach after Minnesota’s scoring stretch, scoring 13 points after the run to help secure the victory.

“We made a little bit of a comeback and just didn’t get over the hump,” Coffey said.

Potts also went 5-6 from the line.

Middle Tennessee shot 7-13 from beyond the arc, while the Gophers shot 6-21 from 3-point territory.

Guard Akeem Springs leads the team in 3-point field goals, but he sat out the game with an injury.

“[Springs is] a good 3-point shooter,” said power forward Jordan Murphy. “It’s going to affect us in some way.”

Center Reggie Lynch picked up two fouls within nine seconds early in the first half. Lynch had another foul early in the second and sat much of the game.

He finished with eight points in 24 minutes.

The Blue Raiders out-rebounded the Gophers 37-24. Not only did Upshaw score 19 points, he finished with a game-high nine rebounds.

“They did a good job of blocking out,” Pitino said. “Give them credit. They were really blocking out well.”

Gophers guard Dupree McBrayer didn’t get his first basket until there was 25 seconds left in the first half. McBrayer found a hole in the Blue Raiders’ defense and hit an uncontested 3-pointer, cutting Middle Tennessee’s lead to six at the half.

McBrayer recovered from his first-half slump. After starting the game 1-5, the guard shot 4-7 from the field in the second, to finish with 16 points.

Dixon put the Blue Raiders up by 14 with 15:31 to go in the second half with a wide-open, straightaway 3-pointer. The guard finished with six points in the game.

Minnesota returns every player next season except for Springs and guard Darin Haugh.

“It’s a different time of year, teams are going to give you the best shot no matter what,” Murphy said. “I’ll take away that. Our guys will take away a whole lot from this experience.”