Two Harbors proves to be too dull

The group’s sophomore LP “All the Places We Would Rather Be” shows polish, but underwhelms 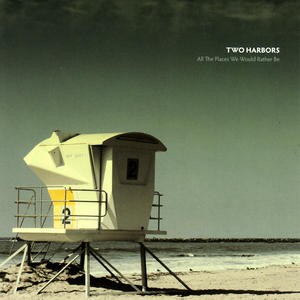 Two Harbors ALBUM: âÄúAll the Places We Would Rather BeâÄù LABEL: Susstones Records This much can be said for Minneapolis indie rock group Two Harbors: TheyâÄôve got one hell of a single. The first song/ single off their sophomore effort âÄúAll the Places We Would Rather BeâÄù is called âÄúYou Pulled the RugâÄù and is rightfully getting lapped up by The Current . The songâÄôs urgent pace, wash of guitar fuzz and addictive vocal hook make it a masterful little pop number. Problem is, if Two Harbors put their best foot forward with âÄúYou Pulled the RugâÄù âÄî and they certainly did âÄî then they didnâÄôt leave much to stand on for the rest of the album. ItâÄôs clear that with âÄúAll the Places We Would Rather Be,âÄù Two Harbors is aiming for a wider fan base. Changing their name from Colonial Vipers Attack (relatively badass) to Two Harbors (wholly generic) was a good start. Furthermore, their new recordâÄôs album art, a placid lifeguard tower, is another nod toward commonplace alternative-rockdom. Armed with every faction of the social networking toolbox and supremely glossy promotional pictures, Two Harbors wants âÄúAll the PlacesâÄù to make a local impact. And it has, as evidenced by heaps of praise from City Pages and How Was the Show? Is some of the attention being hurled at âÄúAll the PlacesâÄù warranted? Absolutely; based on the merits of âÄúYou Pulled the Rug,âÄù and a handful of other tracks, Two Harbors demonstrates that theyâÄôre a cohesive group of capable musicians. Their Britpop and âÄô90s-alt influences are worn on their sleeves, and the band doesnâÄôt do them a complete disservice. For all Two HarborsâÄô minor accomplishments, though, they canâÄôt shake two nagging âÄî and, in turn, fatal âÄî issues: frontman Chris PavlichâÄôs suspect songwriting and the overriding problem of the band being, generally, a massive bore. For evidence of PavlichâÄôs struggles with the pen, look no further than the structure of the songs themselves. That is to say, thereâÄôs a serious lack of verses. When Pavlich does summon the courage to lay a verse out, the tone is often uncomfortable. So instead, he relies on the monotony of chorus repetition, and does so with a standby vocal crescendo that bleeds the songs together by recordâÄôs end. ItâÄôs not just how PavlichâÄôs vocals are delivered, though. Lyrically, the man has plenty of room to grow. Observe the following gem from the aptly titled âÄúWhat I Keep Inside:âÄù âÄúIf you could see me now/you might not recognize the beauty that I keep inside my soul.âÄù An important thing to remember about emotional depth is never to brag about having it. If you do, odds are you donâÄôt. Things get worse when he attempts to trade earnest for clever as evidenced in the track âÄúIf I Had Eyes,âÄù where he sings, âÄúIf I had eyes in the back of my head/I could see the knife in my back.âÄù Suck on that clichÃ©, nameless ex-girlfriend! âÄúAll the Places We Would Rather BeâÄù is not a terrible record. Considering the market for Cities 97 and a litany of other Coldplay -lite acts, there will be downloaders/purchasers of this LP. Still, if a band lacks any sort of musical innovation or novel ideas, it has to fall back on stellar songwriting âÄî something Two Harbors is sorely lacking. 2.5 of 5 stars