Gophers see both sides of a blowout in 1-1 weekend 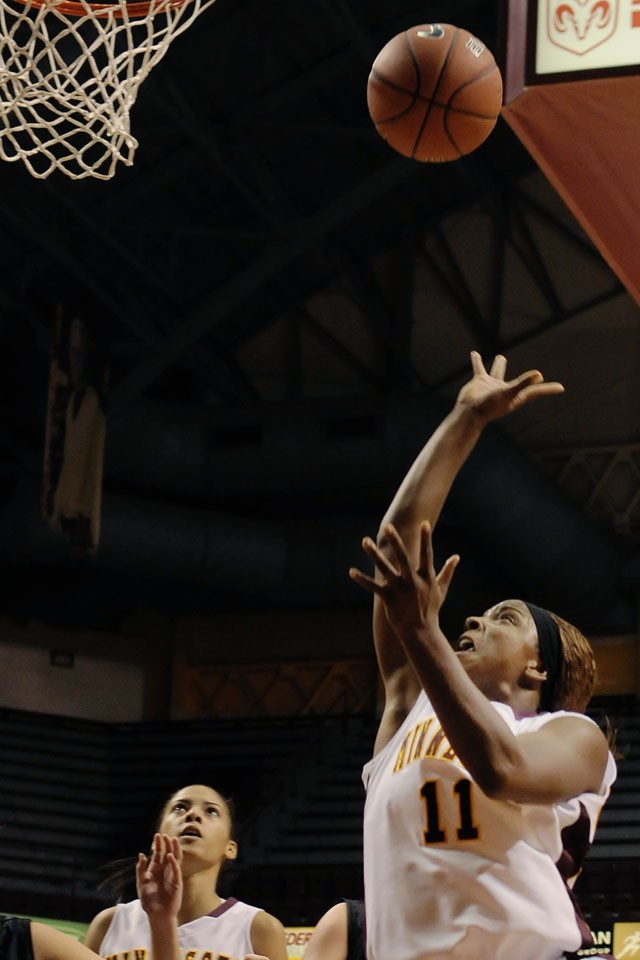 Both games the Gophers played over the weekend were lopsided, but they came out on the right end of only one of them. The Gophers fell to Dayton 97-81 Sunday in the championship game of the Subway Classic at Williams Arena after advancing past Wisconsin-Milwaukee with ease 76-53 Saturday. The Gophers found themselves down 18-15 midway through the first Sunday, but Dayton pulled away with a 15-0 run and took a 21-point lead into halftime, 54-33. Dayton head coach Jim Jabir said his team tried to identify and neutralize dangerous shooters like senior China Antoine, who was 11-for-13 from behind the arc in her last two games. âÄúIt seemed in all of those shots, people forgot where she was,âÄù Jabir said. âÄúSo we made sure we knew where China was all the time.âÄù Antoine finished Sunday with eight points with two 3-pointers. The Flyers didnâÄôt shoot the lights out, hitting 48 percent of their shots from the field, but the Gophers struggled keeping up with their quick pace. The 97 points allowed was the most in Pam BortonâÄôs career at Minnesota. âÄúI thought our defense was pretty poor in the first half,âÄù Borton said. The Gophers shot a respectable 47 percent from the field, but were out-rebounded 28 to 15 in the first half, with 13 points coming off offensive rebounds. âÄúWe got out-worked, out-hustled,âÄù Borton said. âÄúWe kind of got caught up in their tempo, which we didnâÄôt want to do.âÄù Dayton continued its offensive barrage in the second half, finishing 13-for-26 from behind the arc, and never trailed on its way to a big win. Patrice Lalor and Justine Raterman led the Flyers with 25 and 21 points, respectively. One week after losing starting center Katie Loberg indefinitely to a left knee injury, junior guard Brianna Mastey left the court Sunday clutching her right knee. Borton said she had not spoken to the trainer after the game, but was confident that Mastey would be able to play in the Nugget Classic next weekend. The Gophers ran out to a big lead the first half against Wisconsin-Milwaukee Saturday and cruised to an easy victory. Led by Antoine, who had 17 points on 5-for-6 shooting from behind the arc as well as a career-high 11 assists, the Gophers built a big lead early and never relinquished it. Wisconsin-Milwaukee shot just 22 percent from the field in the first half and went more than seven minutes without a field goal. The Gophers went into the break up 37-20. Like the Gophers Sunday, the Panthers kept pace in the second half, but the damage of a big halftime deficit was already done. The Gophers shot 9-for-17 from three-point range Saturday, while Wisconsin-Milwaukee consistently whiffed from behind the arc, finishing 3-for-25. The GophersâÄô superior shooting percentage was a product of how well they distributed the ball, tallying 25 assists on 30 field goals. On Sunday, they had just 16 assists on the same amount of field goals. âÄúWeâÄôve got a lot of work to do,âÄù Borton said. âÄúWeâÄôve just got to keep plugging away and keep getting better.âÄù