Ken Powell and Steve Sviggum may bring the University more stability and accountability, but some criticisms extend even to them 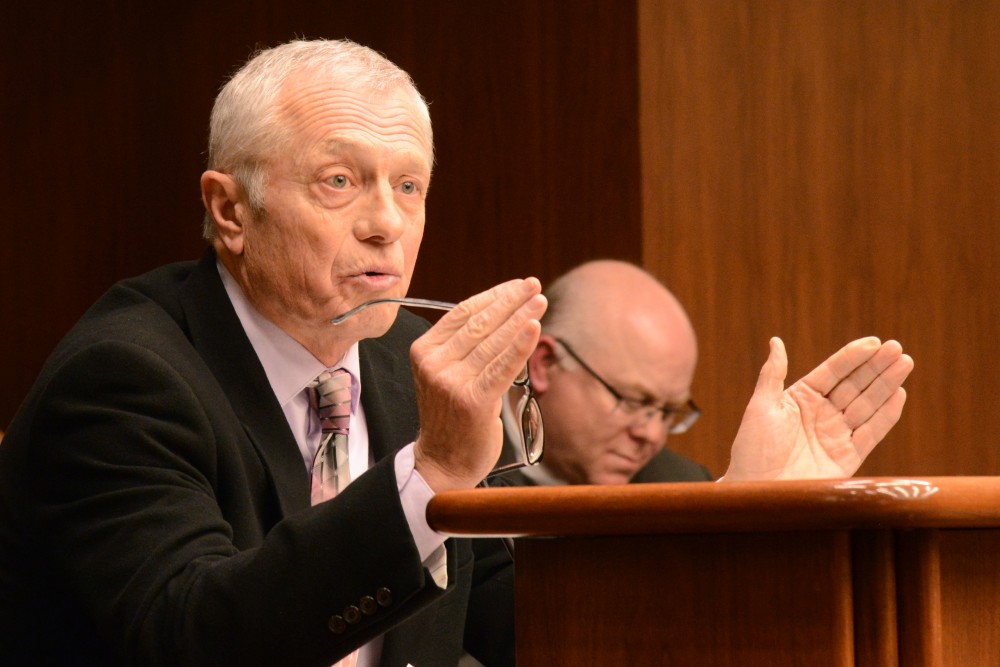 Steve Sviggum makes his opening statement at the joint legislative committee for the Board of Regents candidates nomination at the State Office Building in St. Paul on Tuesday, Feb. 7, 2017.

Two newly-elected members of the University of Minnesota’s Board of Regents are looking to bolster transparency and trust with lawmakers after fielding their criticism.

Former regent Steve Sviggum and General Mills CEO Kendall Powell were elected to the board by the state Legislature February.

Board vice-chair David McMillan and current regent Darrin Rosha were reelected, while Thomas Devine was ousted.

Both new regents said during their campaigns they wanted to increase transparency at the school during a time when state when the board has been criticized by lawmakers.

Sviggum — a former Minnesota House Speaker —said one of his priorities on the board is to rebuild trust between the board and the state.

“The relationship is one that has to be one of trust,” he said. “The legislators elect people to oversee, to run, to manage the University along with the president and do so in a way that they think is in the best interest of Minnesota.”

He added that any large institution is bound to attract some criticism.

Powell — who has served on governance boards at General Mills, Medtronic, The Greater Twin Cities United Way and the University of Minnesota Foundation, among others — said effective oversight and organization strategy always come with challenges.

“I have found that the best way to ensure success … is well informed and engaged board members, trust and transparency … and transparent and inclusive decision-making processes,” Powell said during the selection process.

Governance and oversight are areas where the University needs to improve, said Sen. Jeff Hayden, DFL-Minneapolis.

University administrators have struggled to oversee the athletic department, Hayden said, and the regents should hold them accountable for that.

Sviggum and Powell also emphasized in their campaigns the need for fiscal efficiency in University operations.

Current board Chair Dean Johnson, who served with Sviggum in the Minnesota House of Representatives, said the new regents could bring the University more stability and accountability.

Sviggum’s experience in the Legislature and as a former regent will bring strong institutional knowledge of the school’s financial issues, while Powell’s resume brings a wealth of governance strategy, Johnson said.

Sen. Jason Isaacson, DFL-Shoreview, said he thinks Sviggum and Powell will bring unique advantages to the board.

Sviggum’s knowledge of the political process may help the University better navigate the GOP-led Legislature, while Powell comes in with a successful leadership approach, he said.

Still, some legislators were unhappy with how the selection process was handled.

Sen. Jim Abeler, R-Anoka, said the regents selection process is among the worst he deals with.

Candidates face a thorough vetting process with the Regent Candidate Advisory Council, he said, but when it’s time to vote people can nominate whomever they want from the floor.

Hayden said he didn’t like that Sviggum was nominated outside of the selection committee’s process.

“For [Sviggum] to come outside of the slate of folks that they had and get back onto the Board of Regents was a travesty,” he said.

Sviggum wasn’t vetted by the RCAC in the recent election, but he was screened before being elected to the board in 2011.

Sviggum defended lawmakers’ ability to nominate regent candidates who haven’t gone through the RCAC process, saying the state constitution lets them do so.

“It’s not inappropriate to have the Legislature to bring forward people who have not gone through the process,” he said. “It is their constitutional responsibility to do that.”