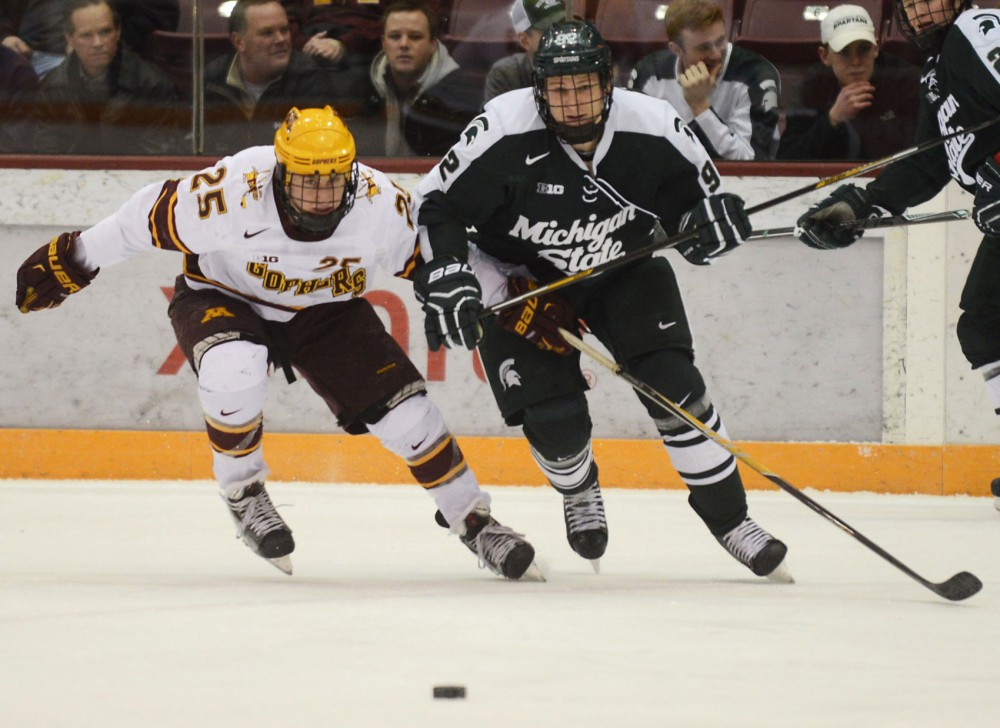 Minnesota forward Justin Kloos races to the puck in the first period against Michigan State University at Mariucci Arena on Feb. 26.

Mike Hendrickson
Nearly every Gophers line contributed in their sweep over Ohio State last weekend, but one in particular found success after being average for most of the year.
Redshirt junior Connor Reilly, junior Justin Kloos and freshman Tyler Sheehy have been together on the team’s top line since the second game of the team’s series against Northeastern, but together the trio scored 14 points combined in the first eight games.
Head coach Don Lucia broke up the line Friday night against the Buckeyes but brought them back together before the third period when the team still hadn’t scored a goal.
The line then put up two points in the third period and broke out in the second game against Ohio State with nine total points. Kloos and Sheehy both set new career highs for points in the game with four and three, respectively.
“I think the chemistry on our line right now is going well,” Sheehy said after Saturday’s game. “We’re establishing some pressure down low. I’ve just been able to find some pucks around the net. I’m pretty lucky.”
The Gophers second line of sophomore Leon Bristedt, junior Hudson Fasching and freshman Tommy Novak was the team’s best scoring line before the Ohio State series, but the first line had more points last weekend.
Lucia said he had been waiting for veterans like Kloos and Reilly to get on the scoreboard.
“It’s something we need,” Lucia said. “Novak’s line has been pretty good offensively, and now Kloos’ line seems to be coming.”
Sheehy, who earned the Big Ten First Star of the Week on Monday, leads the Gophers freshmen in points with 11 and is tied for the second-most on the team.
He had one point in four games before joining Kloos and Reilly on a regular basis and said skating with the two older forwards has helped him score more often.
“Whenever I have questions about just systematic things, they always have a good answer for me,” Sheehy said. “[Working] with them has been easier.”
Before Friday, Kloos and Reilly both started the year slowly, with only six and three points respectively in 11 games.
Reilly scored three points in the series against Ohio State to double his point total. The forward has skated on four different lines so far this season, but said he likes the one
he’s currently on.
“It was nice this weekend to get rewarded a little bit,” Reilly said. “I felt our line was consistent every period, smart with scoring chances. … I think we’re headed in the right
direction.
Lucia said at the beginning of the season he doesn’t expect the Gophers to have any 20-goal scorers, and only Bristedt is currently on pace to eclipse that mark.
The team will need to have multiple people score instead, and getting the first line to contribute more will be key to the Gophers’ success.
“I think there’s three or four guys that haven’t scored much but have the ability to do that,” Lucia said. “That’s going to make a big play in how this season ultimately ends up.”
Delete Image
Align Left
Align Center
Align Right
Align Left
Align Center
Delete Heading