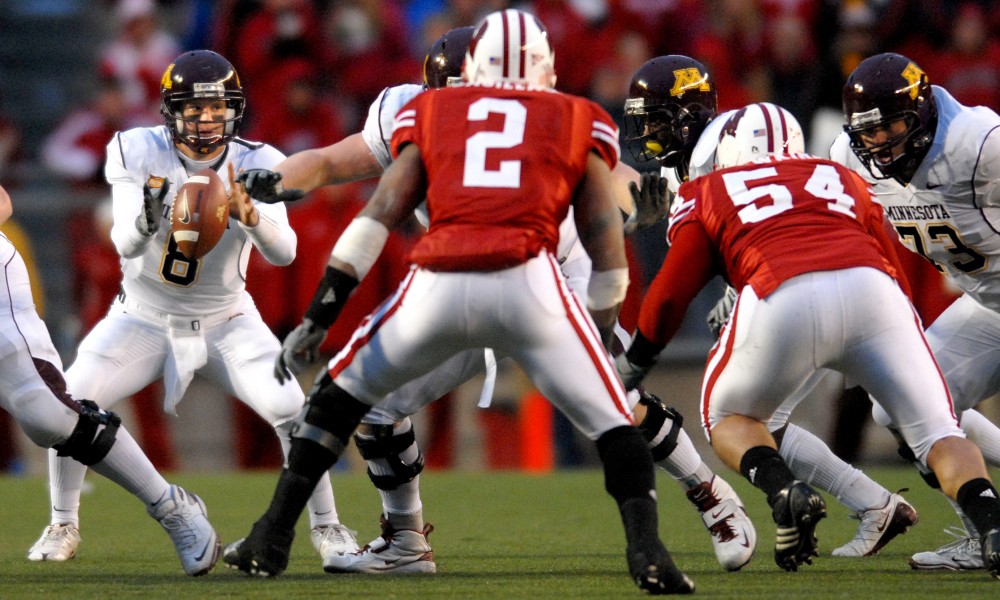 MADISON, Wis. âÄî For the fifth straight year, and the 13th time in 15 meetings, Wisconsin walked off the field with Paul BunyanâÄôs axe Saturday. After leading for most of the game, and having a chance to tie or win a game in which they were two-touchdown underdogs on their final drive, the Gophers still couldnâÄôt crack the Badgers. âÄúThis oneâÄôs going to be the hardest game to let go out of all the ones weâÄôve had so far,âÄù junior defensive tackle Garrett Brown said. âÄúWe had our mind set that we were going to come in here and take that axe, and to fall so short is just crushing.âÄù Wisconsin used the formula that has worked well for the Gophers this year âÄî making big, opportunistic plays on defense even when the offense struggles âÄî and scored two safeties and forced three second-half turnovers in the 35-32 win. MinnesotaâÄôs defense played admirably, too, forcing three turnovers of its own and stifling one of the nationâÄôs best running games. The Badgers came into the game first in the Big Ten and 10th in the nation in rushing offense, averaging 224.4 yards per game and almost five yards per carry. They managed just 116 yards and 2.6 per carry Saturday. âÄúThey run the ball as well as anyone in the country, and that was a big emphasis for our defense this week,âÄù senior defensive end Willie VanDeSteeg said. But the Badgers didnâÄôt need many rushing yards to score when they took over twice inside the 11-yard line. They scored their first touchdown less than a minute into the game after a botched Gophers handoff on the second play of the game, and their final touchdown after a fumble by freshman running back Shady Salamon. Quarterback Adam Weber led the Gophers on a touchdown drive with less than seven minutes to go to bring the Gophers within three, but after a defensive stop got Weber the ball with 2:29 left at MinnesotaâÄôs 22, Weber couldnâÄôt get a first down and threw a fourth down interception to Niles Brinkley to seal the game. âÄúHeâÄôs a tough kid. Hell of a kid,âÄù coach Tim Brewster said of Weber. âÄúHe just keeps competing all the time. I got big admiration for Adam.âÄù The Gophers scored three unanswered touchdowns in the second quarter âÄî their first touchdowns in seven quarters âÄî and led 21-7 at half. After a field goal, Badgers quarterback Dustin Sherer made one of the biggest plays of the game, escaping a VanDeSteeg sack and running across the field to complete a 13-yard pass to the 1-yard line. P.J. Hill punched the ball in a play later, bringing Wisconsin within four. Brewster called it a big momentum swing, saying, âÄúWhen you got a guy in your grasp, you gotta get him on the ground.âÄù âÄúObviously when you get that close to a quarterback, and you have him in your arms, you shouldnâÄôt let him go,âÄù VanDeSteeg said. âÄúThatâÄôs my fault right there. They shouldnâÄôt get a first down there. ThatâÄôs a big play, and as a senior and captain I have to make those plays.âÄù But the defense spent a lot of time on the field, as the Badgers had a possession time advantage of more than 13 minutes and the game itself was nearly four hours long. It didnâÄôt help that the gametime temperature was 36 degrees with a steady snowfall throughout the second half. âÄúThatâÄôs our job, to keep them from getting touchdowns,âÄù linebacker Simoni Lawrence said when asked about the strain put on the defense. âÄúOur offense played good. Our job as a defense is to make stops, and we didnâÄôt make that stop.âÄù So after talks of a possible Rose Bowl berth three weeks and three losses ago, the Gophers return home for the MetrodomeâÄôs final game against Iowa. Wisconsin became bowl eligible Saturday, and now Minnesota will simply try to avoid spending the holidays at the Motor City Bowl in Detroit.