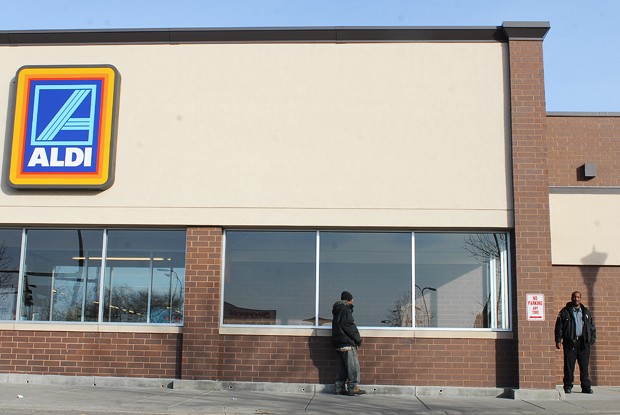 A security guard keeps watch outside an Aldi on Franklin Avenue, where people often sell their food stamps in exchange for cash.

Last Sunday, a man in a hooded sweatshirt stood outside the Aldi grocery store on Franklin Avenue attempting to receive cash for his federally assisted food supplements, colloquially known as food stamps. This is a familiar sight outside many grocery stores in the city, and has posed a problem for Minneapolis police for years. âÄúIâÄôve spent 12-and-a-half years on the street, and I can tell you that itâÄôs nothing new,âÄù Minneapolis police Sgt. Bill Palmer said. Beth Lanis, a cashier at Aldi and University of Minnesota alumna, said she sees illegal food stamp transactions occur almost every day. âÄúThey talk to people, kind of hustle them a little bit,âÄù Lanis said. Catching and prosecuting Electronic Benefits Transaction (EBT) âÄî the electronic form of food stamps âÄî trafficking can be extremely difficult for store employees. Lanis said the cashiers have to actually see the transaction take place between the two parties to officially report abuse to the Department of Agriculture. Most trafficking occurs between three and six oâÄôclock, a storeâÄôs busy hours, because that is when there is the most traffic outside of the store, Lanis said. In 2004, all 50 states phased out physical food stamps and switched to EBT to increase efficiency and effectiveness of program operations for both administrators and recipients. People sell funds in front of stores, and offer to go into the store and buy groceries for an incoming customer. Once purchased, the EBT beneficiaries sell the groceries to the customer for cash. Food stamp benefits can only be redeemed for food or seeds . In the past, traffickers that received food stamp benefits physically sold their paper stamps for a discounted amount of cash. Unfortunately for police, the switch to the EBT card hasnâÄôt stopped welfare fraud. Paul Feeney, general counsel for the Office of the Inspector General (OIG), says the OIG does plenty of investigating into EBT fraud . Food stamp benefits account for more than $40 billion of the federal budget annually, according to the OIGâÄôs semiannual report to Congress. Last February, the OIG testified before the House of Representatives, and called for greater controls over the regulation and distribution of subsidized food benefits. People receiving food assistance through the Supplemental Nutritional Assistance Program (SNAP), formerly the Food Stamp Program, receive a set amount of benefits every month. In order to receive food stamps, a person or family must be below the poverty threshold defined by the U.S. Census Bureau. The poverty threshold for an unmarried person with no children is $10,301, while a four-person family must make less than $22,207 per year in order to receive food stamp benefits. People pushing EBT benefits are willing to pay as low as half-price for goods, Frederick Gibbs, a security guard at Aldi, said. âÄúPeople come in and say, âÄòitâÄôs my money, and I want cash for itâÄô,âÄù Gibbs said. âÄúPeople may have all the food they need for the month, and they canâÄôt redeem food stamps for cash, so they have to get that money somehow.âÄù While Aldi employs a security guard that watches for illegal activity in and around the store, itâÄôs often not possible for Gibbs and cashiers to always be vigilant about food stamp trafficking. âÄúItâÄôs not like we can stop them,âÄù Lanis said. âÄúItâÄôs none of our business; I guess thatâÄôs our policy.”