The guard finished fourth on the team last year in points per game with 9.8. 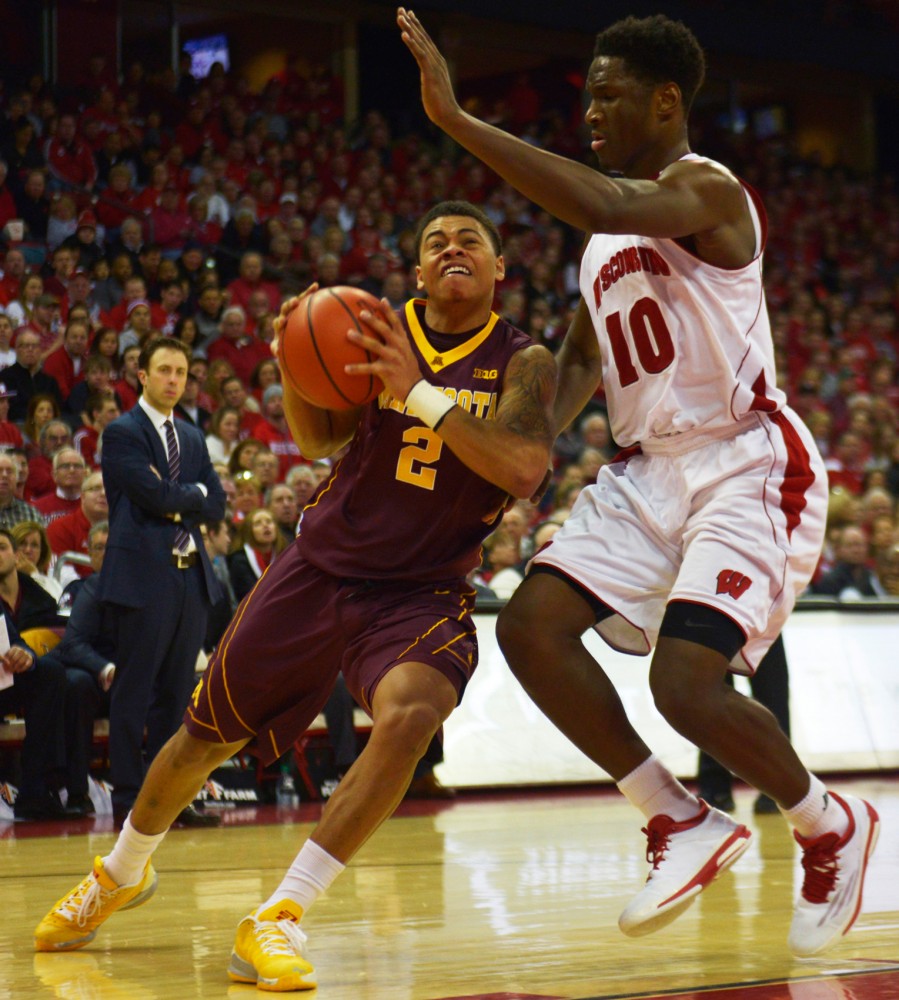 Minnesota guard Nate Mason drives the ball to the basket in the second half against the Badgers on Feb. 21, 2015 in Madison, Wis.

Ryan Falk
The expectations for the Gophers men’s basketball team are lower than they were a season ago, but they’ve only been raised for sophomore Nate Mason.
Head coach Richard Pitino expressed plenty of confidence in the 6-foot-1 guard last Wednesday.
“I think that Nate has the ability to be one of the better guards [in the Big Ten] when it’s all said and done,” Pitino said.
Mason played every game last year for the Gophers, starting eight his freshman season.
Now, he’ll be counted on to make an impact in the starting lineup and live up to his head coach’s words.
“[Pitino’s confidence] feels great, but it’s on me to make that come true,” Mason said.
Mason made an immediate impact for the Gophers last season, scoring 10 or more points in four of his first five games.
Mason was fourth on the team in points per game last season, averaging 9.8 per contest as Minnesota stumbled to an 18-15 overall record and missed the NCAA and NIT tournaments.
He said last season taught him a lesson he can pass on to the new members of the team.
“Not trying to go back on last year, but through it all, we had to stay positive and stay together,” Mason said.
The sophomore is already giving feedback his second year, with five new freshmen on the Gophers roster eligible to play.
“I’m trying to play a part where I can be the leader, step up and help these young guys get through the week we need to get through,” Mason said.
One of the new players, freshman point guard Kevin Dorsey, will likely see plenty of time on the court with Mason this year.
Dorsey came to Minnesota with a solid resume, averaging just under 23 points a game in high school at Clinton Christian School in Maryland.
Mason said he’s excited to be able to team up with Dorsey on the court.
“It’d be really fun,” Mason said. “He’s a really good player; I think we have a similar kind of game, so it’d be really fun.”
Dorsey said he’s been trying to learn as much as possible from Mason since arriving on campus.
“Since I’ve been here, I’ve been following Nate wherever he goes,” Dorsey said. “Whatever he does, I’m right behind him, listening and taking in whatever he’s trying to help me with because he played a lot last year as a freshman and had a successful season.”
Mason still has plenty to improve on during his sophomore year, most notably his free-throw percentage.
Mason shot 61.4 percent from the free-throw line his freshman season, putting the guard almost six percentage points lower than the team average of 67.2 percent.
It’s one of the areas of his game Mason will have to improve on for the Gophers to be successful.
“This year I feel comfortable, and I feel like I know what to expect,” Mason said. “I’m not worried about me. I’m just trying to coach these young guys through and get them to the same level I’m on.”
Delete Image
Align Left
Align Center
Align Right
Align Left
Align Center
Delete Heading