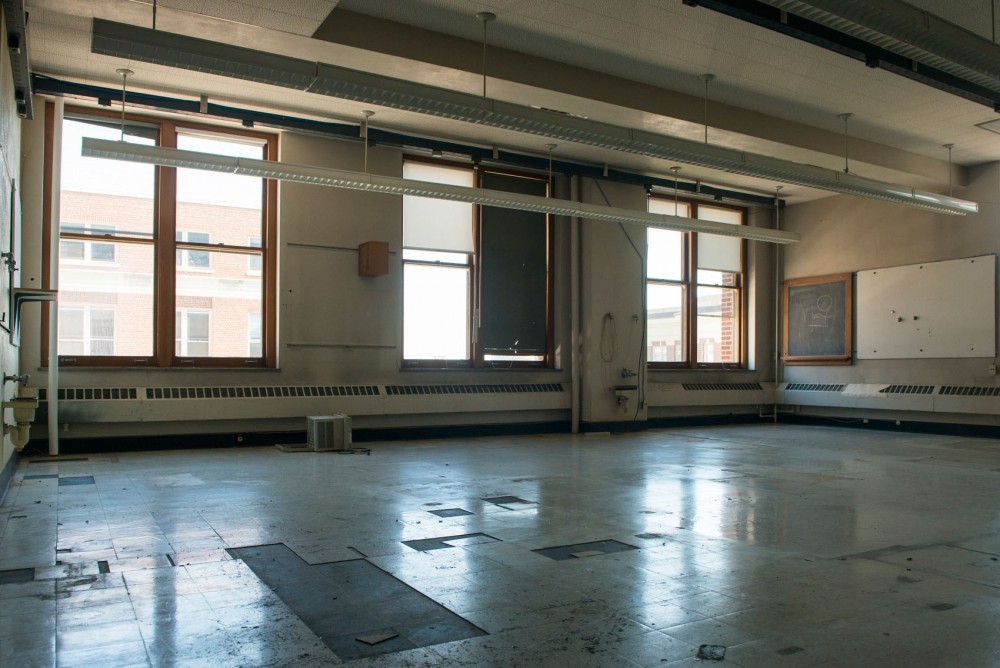 The Tate Laboratory of Physics sits empty in preparation for the two years of renovation planned for the building. While the exterior of the building will be maintained, the interior will undergo a complete remodel, introducing modern lecture halls, labs, and office space, the largest renovation the building has seen in nearly 50 years.

Jackie Renzetti
Since his arrival to Tate Laboratory of Physics in 1959, physics professor William Zimmermann said the building has seen periodic updates to its labs. Now, it’s in for a total makeover.
The nearly 90-year-old building — which Zimmermann said played host to a number of mice and squirrels as it aged — will see its large-scale renovation this summer.
The new Tate Lab will have 33 renovated teaching labs, three lecture halls, a nearly 80,000-square-foot addition and other updates to modernize the building and bring it up to code. During the two-year renovation, hundreds of researchers, faculty members and classes will relocate among 10 different buildings.
“The building renovation will be very similar to what was done at Northrop [Auditorium] and [the] Education Sciences Building, where we basically scooped out the guts of the building and started over,” said project manager Kevin Ross. “It’s really a complete renovation [with] state-of-the-art classrooms, latest technology, all new finishes.”
After final exams in the building this spring, professors, faculty members and graduate students moved to new buildings. On June 15, workers began removing hazardous materials like asbestos.
Ross said demolition will begin late this summer, once dangerous materials are sufficiently removed. Construction will likely start in November or December, he said.
Ron Poling, head of the School Of Physics And Astronomy, said it was clear the building needed to be completely renovated as far back as 15 years ago.
“We were really limited by the fact that the building’s features were designed almost 100 years ago, and it was hard to update the building to accommodate research
programs,” Poling said. “It was expensive for the University. We’d have to renovate labs one at a time when new professors came in.”
The building’s age sometimes hindered its inhabitants’ work.
Physics graduate student and teaching assistant Mike Crumrine said broken radiators led to hot temperatures in the winter.
“The office across the hall from me, I don’t think, ever had a working radiator in the winter. They had a little chart and put it on the side of the window that showed how far you had to open it to get a certain temperature in the room,” Crumrine said.
Astrophysics graduate student and teaching assistant Chris Nolting said the building’s disconnected fourth-floor wings often confused students.
Since buildings on Northrop Mall are historically designated, the renovation will not alter the front exterior of Tate Lab.
But the back side of the building facing Church Street Southeast will receive a new addition with a wheelchair-accessible entrance that will connect the two wings.
In the process, the old particle accelerator — the giant maroon cylinder dressed with a yellow “M” — will be demolished.
Zimmermann said the particle accelerator was used in nuclear physics research and was one of the earliest in the country. No one has used the machine since the 1960s, he said.
“It kind of became a symbol of the physics building, I guess,” Zimmermann said. “There’s no benefit to preserving it, as far as I know.”
The green observatory on top of the lab, which features a 120-year-old telescope, will get a new atrium.
During the renovation, weekly public observation nights will continue with modern telescopes at a yet-to-be-determined location, said Nolting, who runs the program.
Until fall 2017, astronomy and physics students, researchers and faculty members will work in other buildings, including Appleby Hall and Fraser Hall.
Ross said he aims to keep Church Street open, but the mall area will have sidewalk detours. He said he hopes to minimize disruption during school hours.
“Everyone is kind of in less-than-ideal conditions. No one is super happy right now, but it’s just something you have to deal with because that building did need to be remodeled,” Nolting said.
Delete Image
Align Left
Align Center
Align Right
Align Left
Align Center
Delete Heading