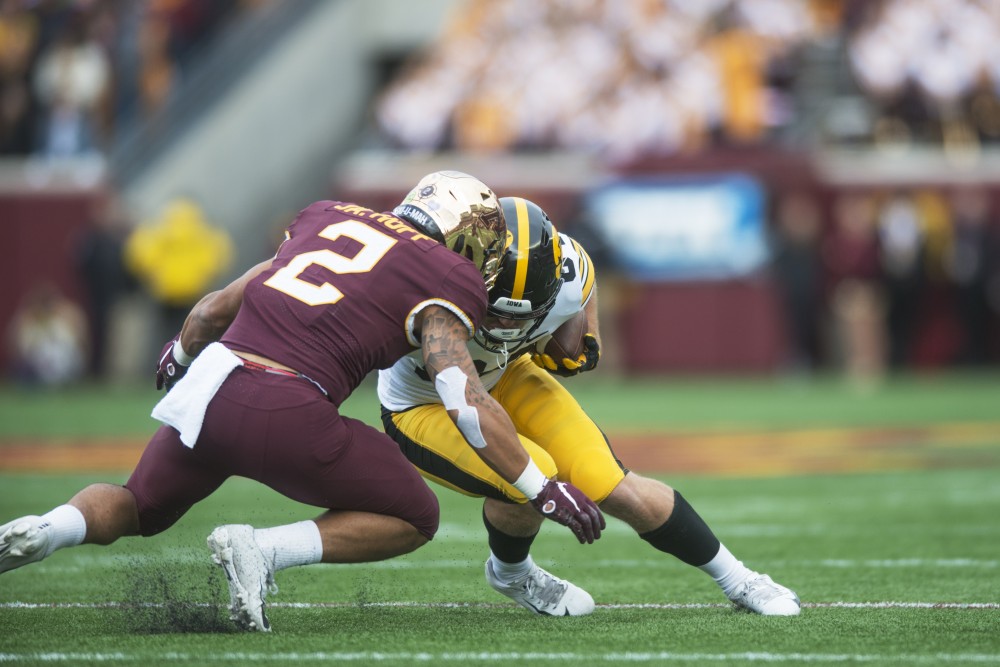 Defensive back Jacob Huff goes in for the tackle on Saturday, Oct. 6. at TCF Bank Stadium. The Hawkeyes defeated the Gophers 48-31.

The Gophers defense made and broke the team’s chances in Saturday’s homecoming game against the Hawkeyes.

Two critical turnovers put the Minnesota offense within the Iowa 10-yard line. On both occasions, the Gophers scored touchdowns.

But the defense couldn’t stop the pass, allowing 314 passing yards on 23 catches for Iowa. The Hawkeyes had four receiving touchdowns by the end of the third quarter, making up the majority of their high-scoring offense, and Iowa (4-1, 1-1 Big Ten) went on to take the victory on Minnesota’s homecoming day 48-31.

“What’s happening is, sometimes our guys back there are young at times and they’re playing the play,” head coach P.J. Fleck said. “But they don’t know the situation, what had happened eight plays ago, what that formation identification is with the motion.”

Iowa targeted the young defensive backs throughout the first half — the Hawkeyes had 216 receiving yards and three receiving touchdowns in the first half. The Gophers switched up their defensive backfield to make up for the absence of injured starting safety Antoine Winfield Jr. by giving Chris Williamson his first start with the Gophers.

“I’m proud of [Williamson] for getting in there. I think it was a little up, a little down but, again, he’s got to get playing more, he hasn’t played football in close to two years,” Fleck said.

“That was a huge interception — huge. That helped us going into the half, and get going with some points,” Fleck said. “But … they’re human beings and they’re kids so the morale of that, of course that helped. But if we were down 18, the same message would have been the same message: it’s one play at a time.”

Gophers defensive end Carter Coughlin forced a fumble when he blindsided Hawkeyes’ quarterback Nate Stanley in Iowa’s second drive of the second half.

“They were having trouble with my speed rush throughout the game, so I figured I’d hit him with that,” Coughlin said. “Next thing I know, [Thomas Barber] scooped it up and was taking it to the house. Should’ve scored but that’s all right.”

Minnesota linebacker Thomas Barber picked the fumble up and ran, getting the Minnesota offense to the Iowa three-yard line. Then, Gophers wildcat quarterback Seth Green ran for a one-yard touchdown and made the score 31-24 with 7:36 left in the third quarter.

But the two turnovers would not be enough as Iowa’s passing game pushed the team to its fourth consecutive victory over Minnesota. Stanley threw 23-39 with 314 yards, four touchdowns and an interception.

Iowa averaged 225.8 passing yards and had five total receiving touchdowns  prior to the game.

Minnesota allowed 106 rushing yards and two rushing touchdowns on 40 carries for Iowa — an average of 2.7 yards per carry

“Credit to them, they found something that was working in the pass game,” Barber said. “Just multiple things that went into it, and we just got to get back to work tomorrow.”