Minnesota will travel to Bemidji State for the first time since the 2010-11 season. 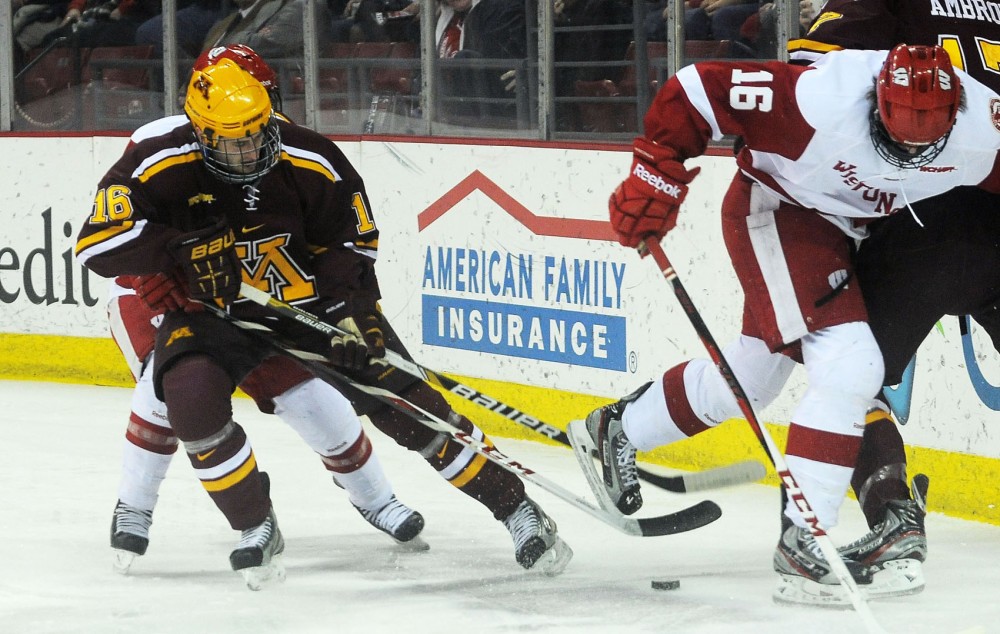 Minnesota forward Nate Condon controls the puck at the Kohl Center in Madison on Friday, Feb. 15, 2013. The Gophers defeated the Badgers 3-2.

Lucia was not pleased with his team’s effort in a 2-0 loss to Denver last Friday at Mariucci Arena, and he didn’t hide it from anyone.

“I think they knew it was coming, [and] they deserved it,” he said.

Lucia’s talks worked, as Minnesota rebounded from its worst performance of the year with a four-goal third period and a 5-1 victory over the Pioneers on Saturday.

“I think it showed on Saturday that we were definitely more ready to play,” junior Justin Holl said. “It showed what we can really do when we’re engaged.”

No. 2 Minnesota (22-7-5, 14-7-5 WCHA) can’t afford another repeat of Friday night this weekend against Bemidji State because the conference race is closer than any in recent memory.

“If we can play like we did on Saturday every game from here on out, I’ll take it,” Lucia said.

He doesn’t want to get into the habit of sparking his team like he did Friday.

“You can pick and choose a couple times a year where you can act and have your little tirade,” Lucia said. “But that’s it.”

St. Cloud State leads the Western Collegiate Hockey Association race with 35 points. Minnesota and North Dakota are tied for second with 33 points and Minnesota State-Mankato and Wisconsin are tied for third with 31 points. All five teams have a shot of at least tying for the conference championship.

For everyone except MSU, this season will be the last opportunity to hoist the WCHA’s MacNaughton Cup. Those four teams will join new conferences next season.

The championship-title plot thickens as St. Cloud State will travel to Wisconsin this weekend and North Dakota will play at MSU.

Minnesota can win the WCHA if it sweeps Bemidji State, St. Cloud State takes one or zero points from Wisconsin and North Dakota takes three or fewer from MSU.

If the Gophers win and tie against Bemidji State, they will need St. Cloud to get swept and North Dakota to split with MSU to be on top.

Wisconsin and MSU can only tie St. Cloud State for the conference title. Both need to sweep and have the Gophers take two or fewer points from Bemidji State to share the title.

The last scenario would create a four-way tie atop the conference. Then the title would be shared among the teams, and tiebreakers would be used to determine playoff seeds.

“We can’t win anything on Friday night other than beating Bemidji,” Lucia said. “I think a lot of teams are fighting just to get Saturday and see where things are at.”

If the Gophers have a letdown like they did against Denver, they could finish seventh in the WCHA.