Jen Schoullis is questionable for the series with an upper body injury. 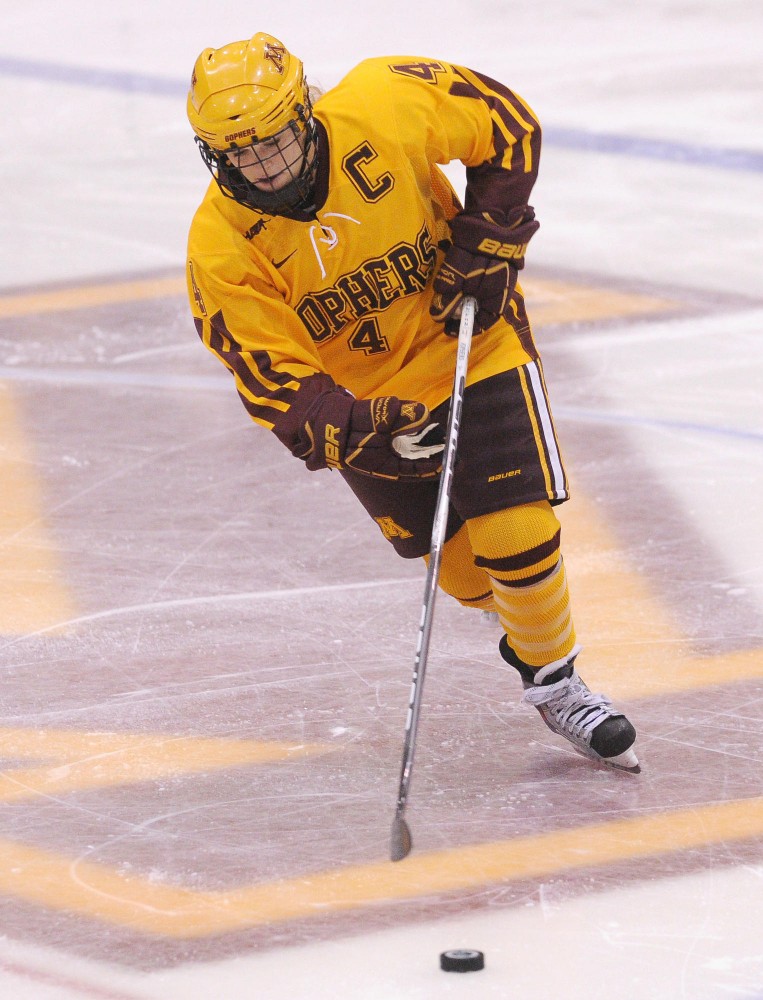 The No. 3 Gophers womenâÄôs hockey team will head into Madison, Wis., to square off with the defending national champions and top-ranked Badgers this weekend, possibly without one of its top players.

Senior forward Jen Schoullis, who ranks second on the team with 10 points through four games, is listed as day-to-day heading into the Wisconsin series.

âÄú[Schoullis] is one of our leaders and one of our top players, so if sheâÄôs able to give it a go, it would certainly give us a good jump,âÄù head coach Brad Frost said.

Senior forward Sarah Erickson said sheâÄôs confident that the teamâÄôs depth and talent can compensate for the loss of Schoullis if she is unable to play.

âÄúWeâÄôll take it game-by-game. We have a good enough, skilled enough and hard-working enough team that can work around [the injury],âÄù Erickson said.

âÄúWe have a lot of depth this year. ThatâÄôs one thing we havenâÄôt had in past years that I think is going to make us a little bit better in the long run.âÄù

The Gophers and Wisconsin have quite a bit of recent history. In last seasonâÄôs WCHA championship game, Minnesota jumped out to a four-goal lead, only to blow it in an eventual 5-4 overtime loss.

Erickson said the team hasnâÄôt forgotten about that game.

âÄúItâÄôs just about the rivalry. ItâÄôs so thick. Any sport on the Minnesota campus hates to play Wisconsin and they hate to play us as well.âÄù

Sophomore Kelly Terry said,âÄúA win or two over the No. 1 team in the nation would be a big confidence booster for the team moving forward.âÄù

âÄúThis is the first game thatâÄôs truly going to test us. TheyâÄôre ranked ahead of us. If we can kick them out of that spot, it would be great,âÄù she said.

Minnesota and Wisconsin are both 4-0 on the season. Two of those victories for each squad were in conference play.

âÄúAny time you face the top team in the country, itâÄôs an exciting time,âÄù Frost said.