“Lucille” picks up patrons at the Fourth Street Ramp and drops them off in Dinkytown. 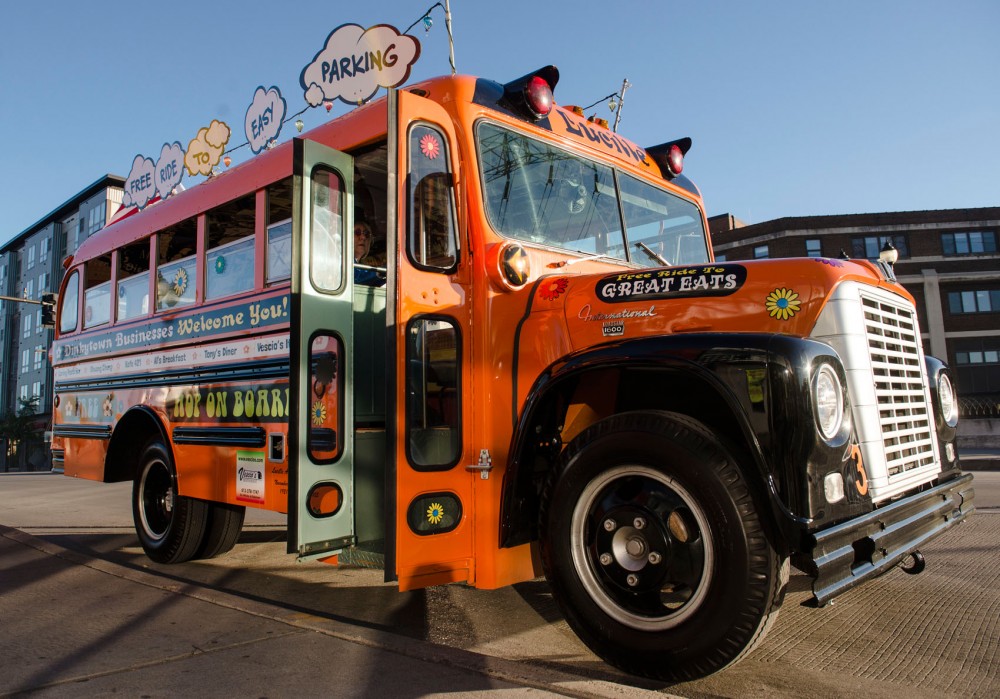 The no-cost bus, named “Lucille,” will shuttle people from the University of Minnesota’s 4th Street Ramp to a stop outside Gold Country Apparel on Southeast Fourth Street. The bus will run six nights a week, between 5 and 9 p.m.

Every five minutes, the shuttle will pick up patrons at the University of Minnesota’s Fourth Street Ramp, make its lone stop outside Gold Country Apparel on Fourth Street Southeast and then make the trip again. The bus will run six nights a week between 5 and 9 p.m.

Jason McLean, who owns the Loring Pasta Bar and the Varsity Theater, said he stumbled upon the bus on Craigslist. He bought it to alleviate access concerns shared by area businesses, especially as new developments have eliminated hundreds of off-street parking spots.

“The few people who have seen [the bus] have been excited,” McLean said. “I hope it will help my business and other businesses weather the storms of construction here for the next year or so.”

KafÃ© 421 owner Georgia Sander said she’s excited about the “cute” bus and believes others will be, too, once they get accustomed to it.

McLean said he bought the bus for $10,000 and paid an additional $5,000 for maintenance, upholstery work and signage, namely a mural wrapping around the entire inside of the bus.

He said he fronted the costs of the new shuttle even though Lucille could benefit all Dinkytown businesses.

About a dozen local businesses, including KafÃ© 421, chose to purchase advertising on the bus for $90 per month. McLean said he hopes that revenue will recoup some of the initial cost.

“We are very grateful to him that he took the initiative,” Sander said. “I think that without him, we probably wouldn’t have been able to do it.”

Area businesses hope Lucille is a serviceable solution — at least for the time being — to development-related access issues in Dinkytown.

“We are still hanging in there, but we are definitely feeling the effects from the loss of the parking,” McLean said. “This is as bad as it’s going to get.”