TJ Oakes is having the best year of his career and is leading the Big Ten in several major pitching categories. 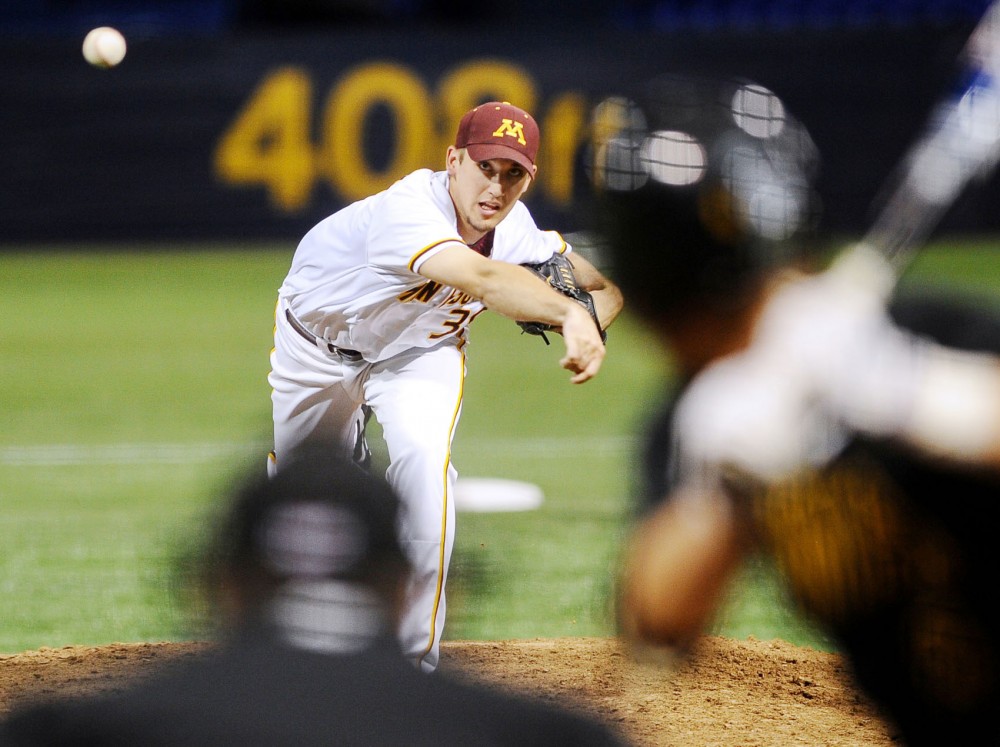 Minnesota pitcher TJ Oakes throws against Iowa on April 27 at the Metrodome. Oakes leaves the Big Ten in innings pitched, ERA and strikeouts.

TJ Oakes refuses to say he’s the best pitcher in the Big Ten.

He doesn’t have to. The numbers say it for him.

Oakes, the junior ace of Minnesota’s pitching staff, is tearing up the Big Ten and enjoying the finest year of his career.

The 6-foot-5-inch, 225-pound righty was selected by the Minnesota Twins in the 41st round of the 2011 MLB Draft last season but elected to return to the Gophers for the 2012 campaign.

“The Twins didn’t really make a formal offer. Once I knew I was in the 41st round, I pretty much knew I was going to be back,” Oakes said. “I couldn’t be happier with the decision right now.”

“I think he felt a little bit disrespected by the whole draft thing,” T.O. said, “being drafted as low as he was.”

So TJ Oakes worked his butt off in the offseason. Instead of playing in a summer league like many other collegiate players, Oakes stepped away from baseball, focused on conditioning and prepared his body for this season.

He said he ran a lot and trained with Insanity, a home-fitness workout regimen similar to P90X.

“I lost some weight and got in better shape. I’ve been trying to eat healthier and stuff like that,” Oakes said. “I really worked on other areas of my game other than actually throwing the ball. That’s carried over onto the field.”

Oakes refined four different pitches and commands them like a five-star general.

He has only walked 11 batters this year, and his stellar control helps him keep his pitch count low, allowing him to pitch more innings and go deeper into games.

“He goes six, seven, eight innings every outing, and it really saves our bullpen for the next two days,” catcher Kurt Schlangen said. “It gives our coach more options.”

Oakes throws two-seam and four-seam fastballs, a slider and a changeup.

His fastball has more velocity than it did in years past. He says he’s reached 93 mph multiple times this season — something he did just once in his first two years. Pitch speeds are not displayed during Gophers games at the Metrodome, where the team plays most of its home tilts.

In strikeout situations, Oakes looks to his slider to get the job done.

“That’s been my strikeout pitch this year,” he said. “I think it has a little bit more bite on it than it has in years past.”

Schlangen, Oakes’ battery-mate on and off during his career, said Oakes “has confidence that he can throw any pitch in any situation.”

Despite Oakes’ improvements, T.O. said he’s most impressed with his son’s composure.

“I think what separates TJ from other pitchers is just his presence, his attitude and his demeanor on the mound,” T.O. said. “He’s very steady emotionally. You can only be consistent in your outings if you’re consistent with your emotions.”

His approach is consistent, too.

Oakes is strictly business on the pitcher’s mound. He takes little time in between pitches, and he attacks the strike zone early and often.

“He sets the pace and tone on the mound and allows us to get to our offense,” head coach John Anderson said. “The players play better defense because they know the ball is going to be put in play.”

The 2012 MLB First-Year Player Draft is in June, and Oakes has surely improved his draft stock, but he said he hasn’t thought about professional baseball much this season.

“I’m not really worried about [the draft right now]. I’m worried about the Gophers’ season,” he said. “Once our season is over, that’ll take care of itself.”

Anderson and Schlangen both said that Oakes has taken on a leadership role this year, both on and off the diamond.

“He’s a model student. He’s a leader. We hope all of our student-athletes pay attention to and follow his lead,” Anderson said. “There have been a lot of great ones, but he’s been as a good a pitcher as I’ve had in my tenure at Minnesota.”