Bikers will need to be more alert in busy intersections off Washington Ave. 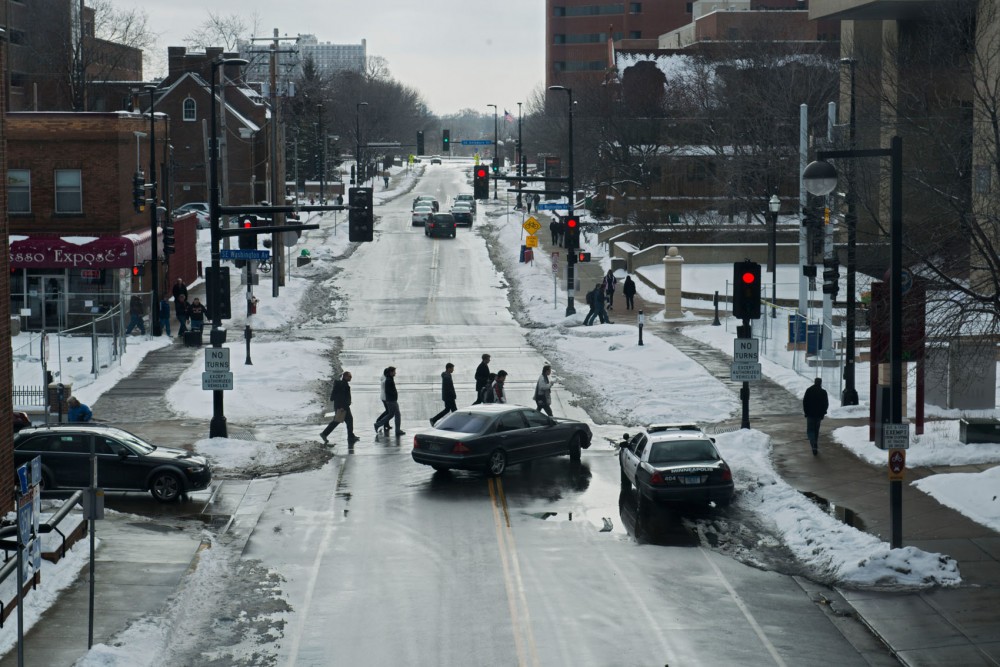 Campus traffic is light Saturday morning at Harvard Street and Washington Avenue. Some are concerned with the design of intersections near light-rail construction on Washington Avenue because it could be dangerous for bicyclists and pedestrians.

Bicyclists at the University of Minnesota could face new challenges along Washington Avenue when the Central Corridor light rail starts running in 2014.

Bicyclists turning left from Washington Avenue will have to pay attention to buses, cars, trains and the tracks, said Steve Sanders, the University’s alternative transportation manager. He said he’s concerned bicyclists will face a steep learning curve adjusting to the new layout.

“If you make a left turn, you have to look behind you, in front of you and be aware of the tracks,” he said.

With so much bike traffic around the University, Sanders said safety is especially important to consider.

He said Washington Avenue has some of the highest concentrations of bicycle traffic in the state. Its bridge, according to the city of Minneapolis, was the top bicycling location in the city by estimated trips per day in 2011.

There were 19 collisions from 2000 to 2010 on Washington Avenue near the University’s East Bank, according to an analysis of Minneapolis accidents.

“It’s definitely going to be a little more confusing because there’ll be so much more going on,” he said.

Sanders said having bus routes on the light-rail tracks sets Minneapolis apart from other cities.

“I don’t know many other places in the United States that have buses on the tracks,” he said.

Much of the construction on the light-rail project is complete, so Sanders said the job now is to educate bicyclists about how to safely travel in the new transportation system, Sanders said.

“We want everybody to be safe here,” he said. “It’s a new situation, so we know there’s going to be a learning curve here.”

Laura Baenen, spokeswoman for the Central Corridor project, said there are ways bicyclists can cross safely.

“When bikes want to turn at Union, Harvard, Walnut and Church [streets], they may be required to pull over to the right and cross the tracks at a right angle,” she said in an email. “That will help cyclists look left, right and down the tracks.”

Both Sanders and Baenen said their organizations are looking into the possibility of signage to instruct bicyclists how to properly cross the street along the light-rail route.

Computer science freshman Nate Fikru said biking along Washington Avenue will likely be smoother than it is now once the light rail begins but said he would like signals or signs to make it easier to cross the street.

“I wouldn’t want to just rely on my own instincts crossing with buses, people and the light rail on a really busy street,” he said.

In 2013, light-rail construction will mostly consist of installing overhead wires and communications equipment, Baenen said. Eventually, bus routes will open on the tracks and test runs for the light rail will begin.

Sanders said once test runs begin, a comprehensive, University-wide campaign will be launched to educate people on how buses, trains, pedestrians and bicyclists will move along the corridor.

Baenen said bicyclist representatives were involved with the design outline of the light rail and will continue to be involved in making biking safe around routes.

Sanders said everyone will be working together because the highest priority is safety.

“Everybody wants the same outcome,” he said. “With all of us working together, I’m confident that we’ll come up with a good solution for everyone.”