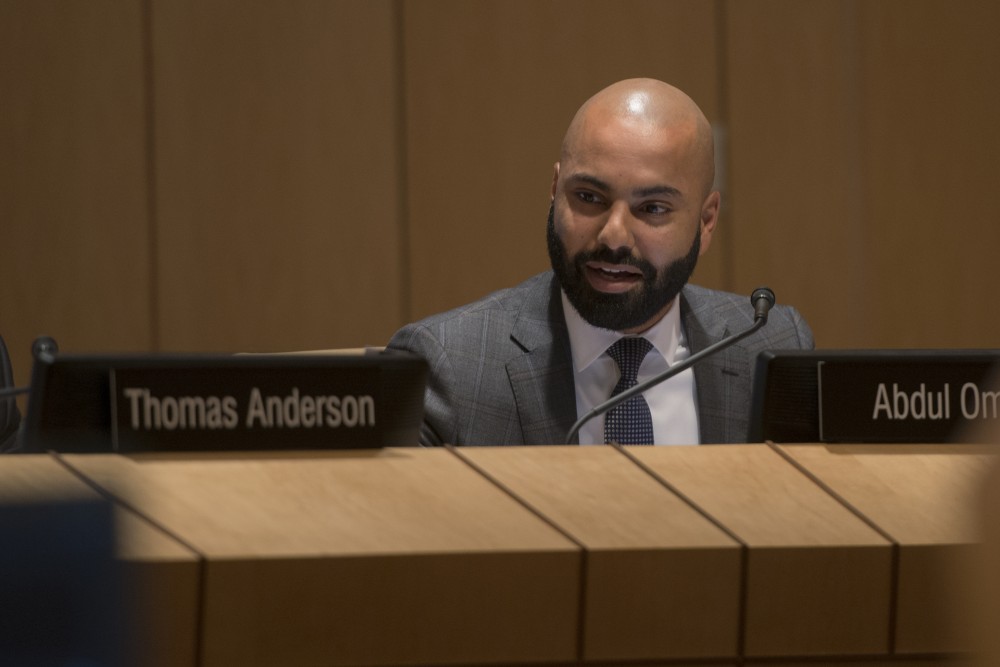 Abdul Omari speaks during the University's Board of Regents meeting on Friday, Sep. 14 at the McNamara Alumni Center.

The search committee selected to help find the next University of Minnesota president announced Friday the group had narrowed its list of candidates — the next step in the ongoing process to find President Eric Kaler’s replacement.

The Presidential Search Advisory Committee, led by Regent Abdul Omari, interviewed nine front-runners selected from a pool of 67 applicants. Those interviewed include five women and four men, and three are people of color, according to a statement posted on the presidential search website Friday.

Out of the nine interviewees, the search committee picked a smaller number of candidates for further vetting, which will include verifying credentials, reference calls, a credit history review and civil, criminal and DMV background checks.

The total applicant pool, according to the statement, was made up of 78 percent men, 22 percent women and 25 percent of applicants were people of color. Many faculty, staff and students have voiced support for choosing a president that is female or a person of color.

The update said the pool “included candidates from a variety of backgrounds” — some University members have raised concerns about non-academic candidates, such as business experts or politicians.

But the University has been criticized for lacking transparency in the search process, which some worry could impair vetting candidates, among other concerns.

For the past two months, the search committee — made up of 23 University members — has worked to find and screen candidates for the position. The group was charged with recommending three to four top candidates to the Board of Regents, who will ultimately decide on the next president.

According to the update, the search committee will review candidates’ information and finalize recommendations to the regents at a later date.