Regent Randy Simonson hopes to use a "Minnesota First" approach to mitigate tuition costs, and says he will use his science background to focus on the medical school. 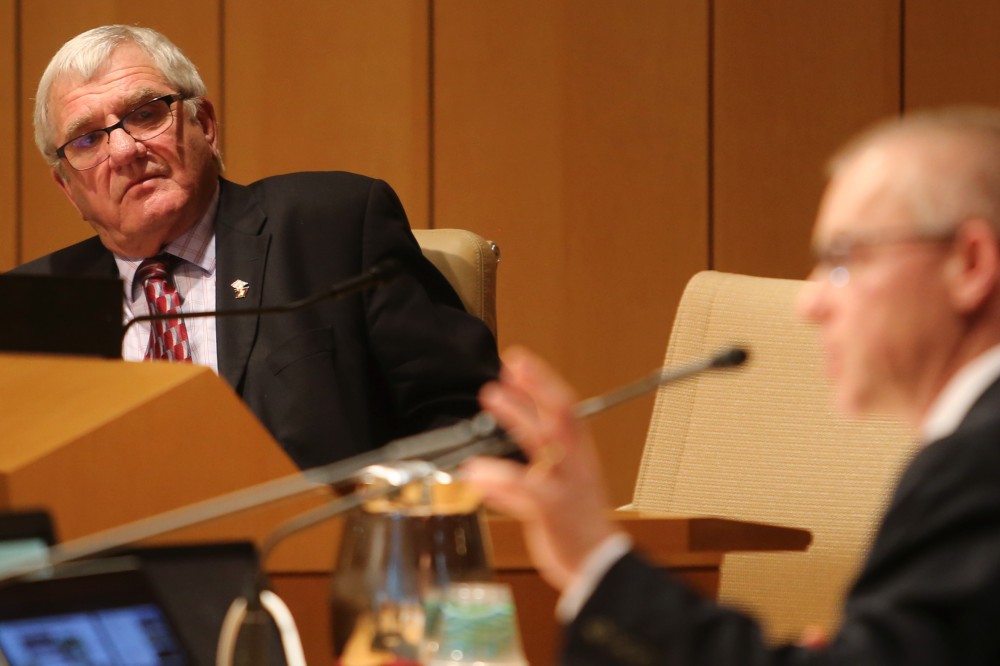 Newly elected member of the Board of Regents Randy Simonson listens to Medical School Dean Jakub Tolar present during a regents meeting on Friday, May 11, 2018 at McNamara Alumni Center. It was Simonson's first meeting.

Elected to the University of Minnesota’s Board of Regents in May, Randy Simonson hopes his science background helps him focus on certain areas of the University, including the medical school and agriculture programs.

The Minnesota State Legislature elected Simonson to the board on May 10 to fill the seat of Regent Patricia Simmons, who resigned from the board this spring. Simonson ran against Simmons in the 2015 regent election, finishing as runner-up.

Simonson earned a doctorate in veterinary microbiology from the University in 1981, where he then served as an adjunct faculty member, co-advised graduate students and published several academic papers.

“The University has been such a key point [to me], and giving back to the University in [this] role looked like a good idea to me,” Simonson said.

While on the board, he said he hopes to use his background to focus on issues relating to agriculture, human and animal health, the economy and the environment.

Simonson’s doctorate degree in a science background is a useful addition to the board, said David McMillan, chair of the board.

“[Simonson] will bring some real background and experience in agriculture and veterinary fields. He understands that industry and has worked in it. We always can use strong standings with key constituencies like that,” McMillan said.

“He is someone dedicated to strong communication, advancing in science and providing opportunities,” said Jon Mahlberg, vice president of manufacturing operations at Cambridge Technologies.

Simonson said he would like to see improvements made to the medical school, particularly in areas surrounding opioid addiction and mental health.

“Obviously the medical program is a big part of the university … and I want to get a lot closer to that,” Simonson said.

He also hopes to mitigate rising tuition costs. Through a “Minnesota first” approach, Simonson said he wants to freeze and reduce resident tuition.

Improving the relationship between the University and the Minnesota Legislature is another area Simonson wants to address during his term as regent.

“Our relationship right now with the legislature is not as good as it could be,” he said.

Simonson became indirectly involved in a campus controversy last month. Lawmakers told the Minnesota Daily in May that Simonson’s stance against a University hosted fellowship, which included abortion medical training procedures, led anti-abortion Republicans to vote for him.

Simonson said the University should not be involved in a controversial topic like abortion and stem cells should be obtained from adults instead.

“That’s a highly controversial issue. We have University of Minnesota supporters on both sides of that aisle,” Simonson said. “The University in itself can’t be everything to everybody … let’s focus on things that are less controversial and that are just as important in health.”