The bittersweet life of sugar babies at the University of Minnesota

A growing number of college students are using the service SeekingArrangement to meet sugar daddies and mommies, who financially support them. 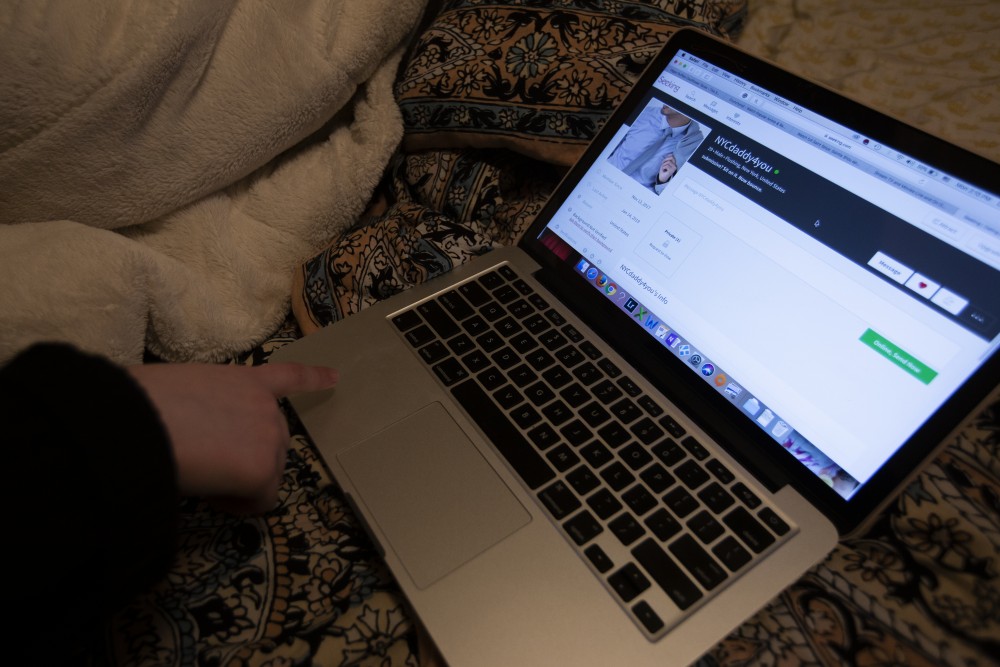 University student Bella* shows an example of what navigating the SeekingArrangement website looks like on Monday, Jan. 14 in her apartment near campus. Ava communicated with several men on the website, getting compensated to spend time with them.

Last year, University of Minnesota student Ava* found an unconventional way to financially support herself while attending school — she became a sugar baby.

In exchange for around $100 a night, Ava would go to dinner with wealthy, middle-aged men she met online. She would spend hours putting her hair up, choosing the right outfit and doing her makeup before going out to meet a sugar daddy.

Ava is one of the 542 students at the University of Minnesota who were registered on SeekingArrangement last year. SeekingArrangement is an online companionship service, which markets itself to college students as a way to make money and mitigate student debt. Many students like Ava have used the service to connect with men and women by exchanging companionship, intimacy and often sex for fancy dinners, money and gifts.

Though services like SeekingArrangement can be empowering, some say there are safety and legal risks associated with this type of work, which can take an emotional toll.

“I found it exciting. It felt good getting paid money,” Ava said. “It was kind of fun in a weird way. I would feel hyped after using it.”

“We wanted to be able to offer [students] one less burden associated with the cost of college, and encourage them to find relationships that would help them elevate their lifestyle,” SeekingArrangement spokesperson Kimberly De La Cruz said in an email. Students are offered free memberships when they join the service using their university emails.

Ava, who no longer uses SeekingArrangement, said she joined in 2017 because she couldn’t afford rent, tuition and groceries while attending school. She found it exciting and empowering to make money by going on dates with people from SeekingArrangement. Although she never had sex with any of the men she met, she said sex is part of many arrangements between sugar daddies and babies.

“I felt like I was trying to not do the sexual labor, but also wanted to get paid. It was hard balancing that,” Ava said.

To Ava, the arrangements were mutually beneficial. She said she was financially secure enough to say “no” if she didn’t want to meet with a sugar daddy.

“I had the option to say, ‘no, I don’t want to go on this date.’ … If I was really depending on that money, that line probably would’ve been more blurred,” she said.

Sarah Polowin, a graduate of Carleton University in Canada who wrote her doctoral thesis on SeekingArrangement in 2017, found that money is the primary motivating factor for college students using the service.

The service markets itself as a way for members to develop relationships on their own terms, and is “where beautiful, successful people fuel mutually beneficial relationships,” according to the company’s website.

Polowin found that the arrangements created on SeekingArrangement are more complicated than the website lets on.

When sugar daddies and babies meet online, sugar babies are not supposed to ask for money or imply that they will engage in a sexual relationship — that’s often negotiated later in person, Polowin said.

“The premise of an arrangement is that you explicitly state what you want for what kind of compensation. But in theory, it’s almost the opposite,” she added. Many say that relationships on SeekingArrangement differ from prostitution and traditional dating, creating a gray area that raises legal and safety concerns.

“It is a really unique and new phenomenon. These women don’t identify as sugar daddies’ girlfriends, but [they] distance themselves from traditional sex workers,” Polowin said. “[It] is kind of this gray, in-between space where it is clear that money and some type of companionship, whether that be sex or emotional intimacy, are exchanged.”

While prostitution is illegal, SeekingArrangement operates around the law by the language it uses, Polowin said. “They say they are not exchanging money for sex, but are exchanging companionship for intimacy.”

When meeting with men she met on SeekingArrangement, Ava, like the other sugar babies interviewed by the Minnesota Daily, said she often worried about her safety. She took extra precautions by meeting men in public places so they would not know where she lives.

“It is a dangerous game. You want people to do what they want, but also keep sugar babies safe,” Ava said.

According to the 2015 Student Sex Work Project, a survey of 6,773 students in the United Kingdom, about one in four university students who engage in some form of sex work report not always feeling safe while working.

In 2017, a University student, who is not being identified to protect her identity, reached out to The Aurora Center at the University for support while being harassed by a man she met on SeekingArrangement.

According to a Minnesota District Court transcript of her testimony, the student alleged the man sexually assaulted her around the time they met. The two then engaged in an arrangement that lasted four months, and after she tried to end it, she alleges he harassed her through social media.

The student, who recently underwent a legal name change, filed for a restraining order in court through the University’s Student Legal Service in 2018. The student was awarded a restraining order, which is effective until June 2019. The court did not find sufficient evidence to prove sexual assault.

The student was not able to be reached for comment, and her lawyer denied requests for comment.

She said she had consistent arrangements with several sugar daddies over summer break while at home in Minneapolis. While she enjoyed the consistency and felt trusted and respected in these arrangements, using SeekingArrangement sometimes negatively affected her mental health.

“I was starting to feel very objectified,” said Laura, who earned over $2,000 using SeekingArrangement. “I had to be really careful about where my headspace was because it was not always the best thing for me to do, even if I just wanted money.”

Teela Sanders, research director and professor of criminology at the University of Leicester in England, said young women work through services like SeekingArrangement in total isolation because they fear judgement, which can lead to negative mental health effects.

“Sometimes I would forget about the money, because I actually started enjoying the sexualness of it,” Laura said. “But then, whenever the money would come around, ‘oh yeah, this is all I am here for.’”

Bella,* another University student who has used SeekingArrangement, said she doesn’t feel like a prostitute, even though sex was part of her past arrangements.

Even with the safety risks and emotional toll that can result from being a sugar baby, the number of students using the service is on the rise.

“I did feel kind of guilty sometimes. My friends would be like, ‘why are you doing this?’ and kinda judged me for doing it,” Bella said. “I don’t believe I am a prostitute. I was comfortable enough with myself that I was fine doing that part of it.”

*The names of the sugar babies in this story have been changed for privacy reasons.