Minnesota will play No. 22 Ohio State and No. 1 Penn State this weekend. 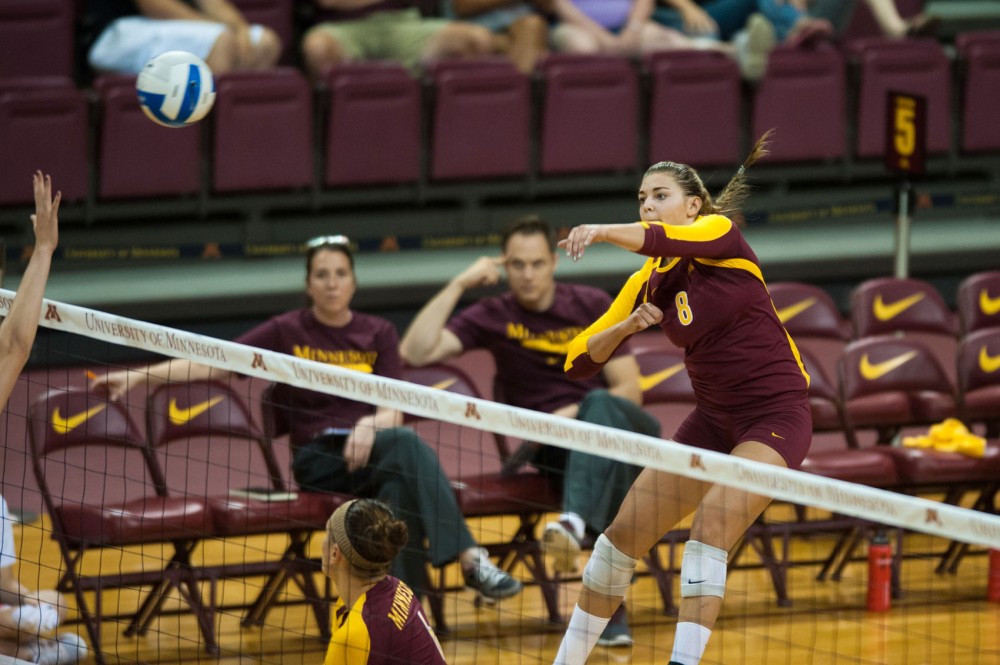 Minnesota outside hitter Katherine Harms spikes against Miami Ohio on Sept. 1 at the Sports Pavilion.

The Gophers volleyball team will play the No. 1 team in the nation this weekend. But it’s hard to tell from the team’s demeanor.

A theme of new head coach Hugh McCutcheon’s season has been to focus on Minnesota’s side of the net and not worry too much about who is on the other side.

The No. 10 Gophers’ match against the Nittany Lions may be highly anticipated, but McCutcheon said his team has done well this season to not look too far ahead.

“As soon as we start to overlook opponents, I think we get into some pretty dangerous territory,” McCutcheon said. “The biggest game is the one we’ve got next.”

The Buckeyes are 10-4 this season and split their opening conference play last weekend. They won in three sets against Iowa and lost in four to Nebraska.

As for the rankings, McCutcheon said they don’t drive the team too much, and he said he wasn’t even sure where his team ranked currently.

Penn State beat Nebraska last weekend when the teams ranked No. 4 and No. 3, respectively. Soon after, the Nittany Lions jumped to No. 1 and the Cornhuskers fell to No. 6. But the potential movement in the polls isn’t the point of playing highly ranked teams, McCutcheon said.

“It’s a good chance to see where we’re at,” McCutcheon said. “We always want to play the best teams we can.”

Palmer recently earned the starting setter position for last weekend’s wins against Illinois and Northwestern. The choice proved to be a good one, as Palmer earned the Big Ten conference’s Co-Setter of the Week award Monday.

“I handled [starting] the same way,” Palmer said. “I knew what I was going to do. We went in with a plan, and it was my job to execute that plan. So, it wasn’t really too much of a mindset change for me.”

Coincidently, the other setter Palmer shares the honor with is Penn State’s sophomore Micha Hancock.

Hancock is currently ranked third in the nation in aces per set. She is also second in the Big Ten in assists.

Palmer said the title may bring an added dynamic to the match.

“It’ll definitely play into a little bit of a rivalry this weekend, I think,” Palmer said. “[I’ll want] to outplay her this weekend, obviously, to help the team win.”

In a Big Ten preseason poll, the Gophers ranked fourth in the conference while Nebraska took the top spot and Penn State came in second.

But Katherine Harms, senior outside hitter and Big Ten Player of the Week for the second time this season, said she thinks the conference title could go to any team.

“It’s just going to be really who has a better game on the night,” Harms said. “You have great teams like Penn State and Nebraska, but we can also go toe-to-toe with those teams.”

The allure of having a chance to beat the best doesn’t elude the team, Palmer said.