Minnesota powers through slew of injuries

The Gophers have sustained injuries to numerous key players this season. 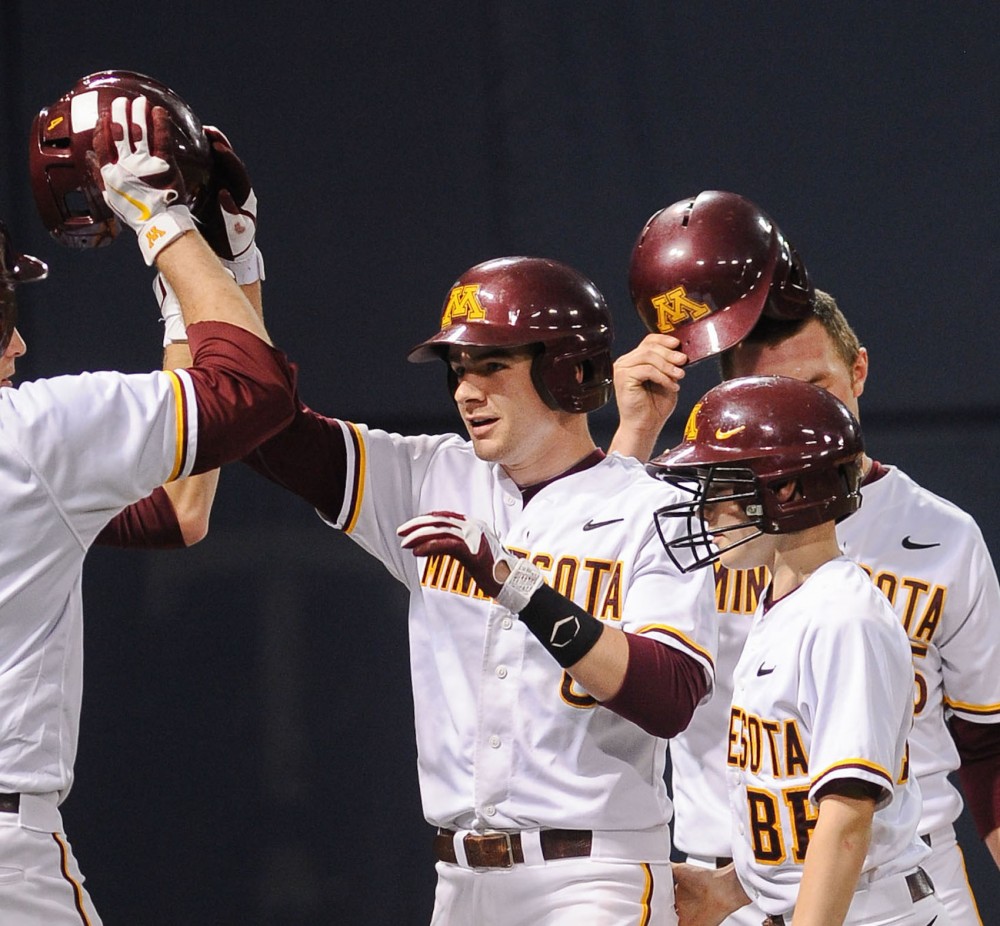 Minnesota catcher Matt Halloran celebrates with his team after hitting a two-run home run against Iowa on Friday, April 27, 2012, at the Metrodome.

Injuries have ravaged the Gophers baseball team’s roster this season. During Saturday’s game, Handel pulled his hamstring, becoming the latest addition to the seemingly never-ending list of injured players.

Though some players have returned from their early-season ailments, the team has spent most of the year working around the slew of injuries its players have faced.

NCAA college baseball teams are allotted a maximum of 11.7 scholarships, making it tougher to find equivalent replacements for injured starters.

“You don’t have the talent in your backups to replace those kinds of players, so we’re doing fine,” he said. “We’re piecing it together.”

Minnesota, which lost its second consecutive series over the weekend, is 19-16 on the season despite the injuries.

“In a lot of ways, we’re probably doing better than some people were thinking we could do,” Anderson said.

The Gophers have had to shuffle players around all year, but the team has responded well for the most part.

“We always emphasize the next man up, so if someone gets hurt, whoever’s playing in their position always has to be ready,” outfielder Jordan Smith said.

When Motl went down during the first weekend of the year, Smith, a freshman, made starts in center field.

The team stresses the next-man-up mentality, but that’s been easier said than done at the catcher position.

When Halloran got hurt, Athmann stepped in. When Athmann went down, Mark Tatera took the role.

Athmann, who has since returned to the lineup, said earlier this month that it was frustrating to sit on the bench knowing he couldn’t help the team.

Still, even with all the injuries, the Gophers have found viable alternatives.

Smith said he thinks adaptability has been one of the team’s greatest strengths — a trait he said was also evident amid the numerous travel and schedule adjustments they needed to make at the beginning of the season.

Now, as the Gophers seek a Big Ten tournament bid, they’re not focusing on the injuries.

The Gophers sit eighth in the conference with a 6-9 record. The Big Ten tournament expanded this off-season to include eight teams, rather than the usual six. Minnesota would be in the field if the season ended Wednesday.

There’s still work to be done, though, because the Gophers have nine conference games left, including three this weekend against Penn State.

“We’re not going to use [injuries] as an excuse, but it’s reality,” Anderson. “It’s an honest perspective of what’s going on. The kids are going to finish up strong here. I trust they will.”