The new class is showing its worth on offense and defense for Minnesota. 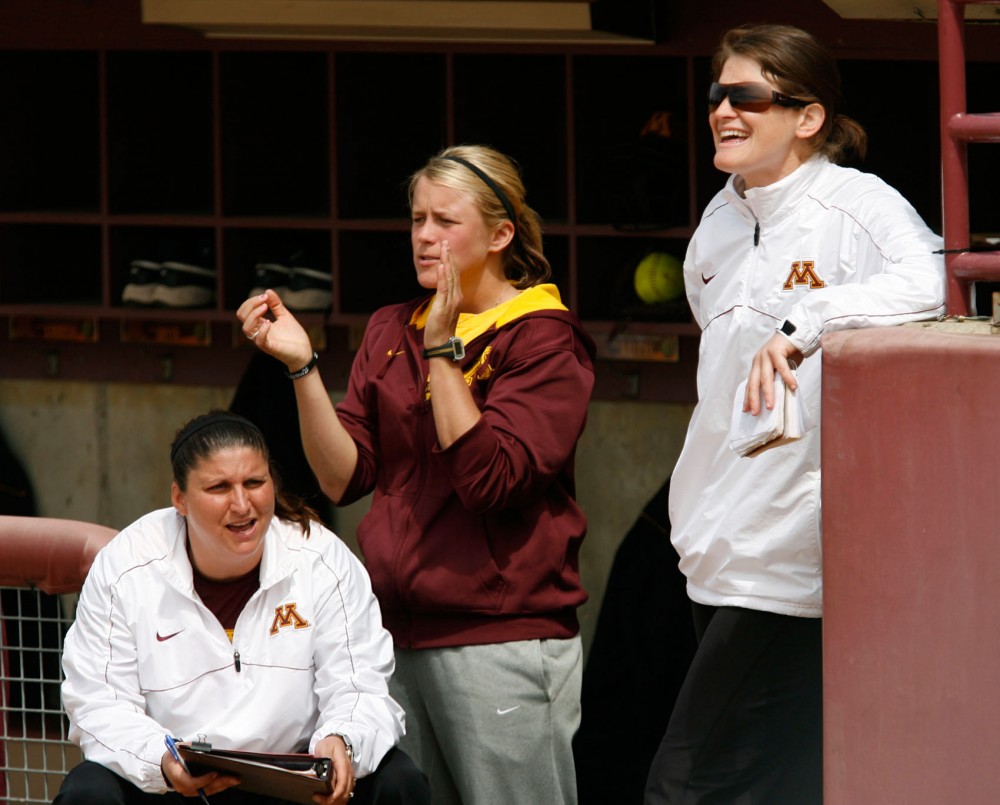 Minnesota head softball coach Jessica Allister, right, volunteer assistant Dannie Skrove and pitching coach Piper Ritter cheer from the dugout May 5, 2013, against Indiana. Allister has led the Gophers to three straight seasons with 30 or more wins since her arrival in 2010.

The Gophers softball team is off to the best start in program history, and a big part of that comes from a group one may not normally attribute to: freshmen.

No. 12 Minnesota’s group of seven newcomers has made itself known early, with position players and pitchers alike among the team leaders in multiple stat categories.

“They’re softball players, not freshmen,” said head coach Jessica Allister. “At this point, they’ve been through a full semester, and they’ve played softball for a long time.”

Not only are they softball players, they’re very good ones at that.

Infielder MaKenna Partain leads the team in hitting with a .481 batting average through the first nine games.

Perhaps the biggest of her hits came in the first game of the season against Maryland — a walk-off single in the bottom of the seventh to send the Gophers to 1-0.

Her performance on the opening weekend earned her Big Ten Freshman of the Week honors, and helped Minnesota to a 5-0 start.

“I’m just trying to be aggressive at good strikes,” Partain said. “I try to move runners when I can, and then somehow, I get a ball on the ground and get on.”

Partain’s fellow freshman, catcher Kendyl Lindaman, is also off to a hot start with her bat. She has hit .444 through nine games and holds the team lead in homeruns with three.

In the first two games of the weekend, she went 3-6 and blasted two solo homeruns in the process.

Although she cooled off in the final two games of the tournament, Lindaman’s performance was enough to give the Gophers a second consecutive Big Ten Freshman of the Week honor. Lindaman shared the plaudit with Wisconsin’s Kaitlyn Menz.

While the hitting has helped the Gophers, what may be the biggest key to their program-best 9-0 start has been their pitching — and of course, freshmen are playing a major role.

Amber Fiser has been the most prominent of the class in the circle. The newcomer from Van Horne, Iowa, has a record of 3-0 in four appearances and boasts a 1.40 ERA.

She has emerged as Minnesota’s No. 2 starter behind senior Sara Groenewegen with three starts so far and doesn’t appear to be shying away from the role at all.

“Amber has given us some really, really good starts,” Allister said. “Our entire pitching staff has done a great job.”

In addition to Fiser, freshmen Carlie Brandt and Kendal Judge have both made pitching appearances for Minnesota. The two gave up just one earned run combined through 7.2 innings pitched.

Lindaman has had a front-row seat to all the pitching and said learning to catch for a new staff hasn’t been all that bad.

“It’s actually been easier than I thought … these pitchers are great,” Lindaman said. “You just have to know them not only as a pitcher but as one of your friends or teammates.”

That early chemistry isn’t limited to freshman batteries, but across the whole class, it is something that could prove impactful in keeping the Gophers’ unbeaten start going.

“We’re actually pretty close,” Partain said. “All the freshmen have made an impact in some way … it’s pretty cool.”