The Gophers will play Sunday with a trip to the Frozen Four on the line. 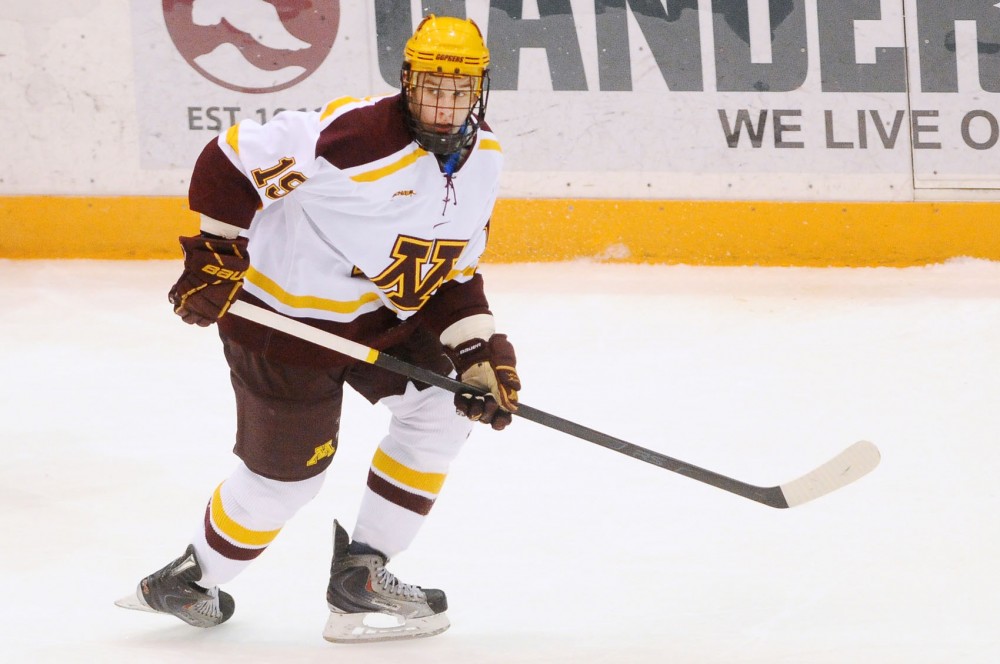 Minnesota will get its rematch with North Dakota on Sunday after defeating Boston University 7-3 in the semifinal of the NCAA West Regional.

This rematch with UND — one week in the making — will come with a trip to the Frozen Four on the line.

The Gophers used goals by five different players and stellar net play by Kent Patterson to get past BU on Saturday.

Kyle Rau got the Gophers on the board early in the first period in a spot he has made his living this year — the crease.

Rau settled in the blue paint with traffic in front of goaltender Kieran Millan and slid the puck in to make it 1-0 early.

Minnesota did not earn many scoring chances after Rau’s goal, but it was able to limit BU in an evenly matched first period.

The Gophers only fired nine shots on Millan in the frame, but possessed a 1-0 lead at the end of the first period.

Minnesota lived in the penalty box in the first half of the second period, but managed to stymie the Terriers attack.

The Gophers responded with the help of Jake Parenteau less than two minutes later.

He handled a pass from Nate Condon and blistered a shot top shelf to beat Millan. It was just his second goal of the season, but came at an opportune time.

Parenteau gave the goal right back, however, with a turnover four minutes later.

He essentially passed the puck to Boston’s Ross Gaudet right in the crease and Gaudet scored to make it 2-2.

Both Seth Helgeson and Jake Hansen lit the lamp to give Minnesota to a two-goal lead going into the third.

Seconds before the second period ended chaos broke out in front of the Minnesota bench and when the dust settled, Minnesota ended up on the power play that carried over into the next frame.

It did not capitalize at the start of the third period and instead let BU back into the game.

Justin Holl took an untimely hooking penalty early in the final frame and Adam Clendening scored on the ensuing faceoff to narrow the deficit.

Minnesota withstood the rush BU put on following the goal, but looked uneasy.

Then senior Nico Sacchetti — whom Patterson said boasts the best playoff beard on the team — took matters into his own hands and ensured that beard kept growing.

Sacchetti bolted into the BU zone and deked Millan to the near post before finishing with his backhand to make it 5-3.

Patterson was a brick wall the rest of the way and made sure that lead held.

Hansen and Nick Bjugstad added empty-net goals to finalize the score at 7-3.