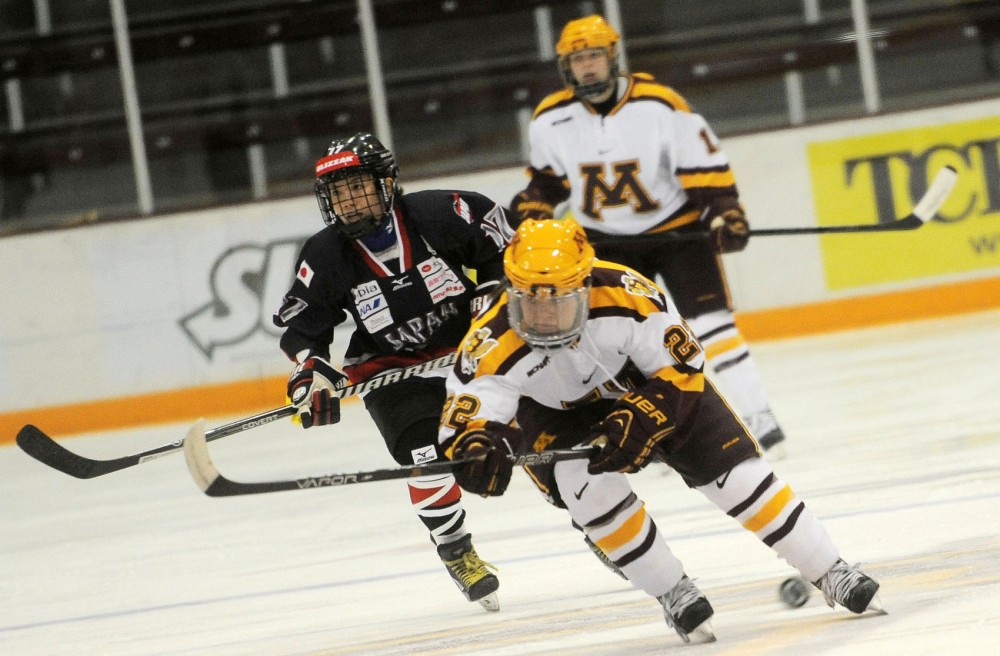 Sophomore forward Hannah Brandt skates with the puck during the Gophers' exhibition game against Team Japan on Thursday, Sept. 26, 2013, at Ridder Arena.

No. 1 Minnesota will raise its NCAA championship banner Friday — and then get back to business.

“It’s something that’s an incredible experience and something that we’ll always remember, but once that puck drops, it’s going to be all about this year,” head coach Brad Frost said.

And the Gophers will have a tough task ahead of them this weekend with No. 4 Wisconsin in town.

“It’s … the border battle, so that’s always exciting,” sophomore forward Hannah Brandt said. “It’s our home-opener weekend, so it would be exciting anyways, but it obviously adds a little incentive.”

Wisconsin goalie Alex Rigsby said the rivalry is “one of a kind.”

“Every time we play them, it’s a fun, competitive game,” she said. “You know it’s going to be great hockey every time you step on the ice.”

Rigsby said the border battle series is her favorite to play in.

Minnesota swept Wisconsin last season in four games, but the two teams now look very different after having both lost their leading scorers, among others.

Rigsby participated in Team USA’s selection camp in the offseason but was left off the national team’s 25-player roster.

Still, the Gophers know she’s an elite talent between the pipes.

“She has the ability to change games,” said Brandt, who’s played both with and against Rigsby. “Hopefully she’s not playing as [well] as she can.”

Rigsby posted a 1.49 goals-against average last season and had a .943 save percentage in nearly 2,100 minutes.

Gophers senior forward Sarah Davis said goals were hard to come by against Rigsby and admitted she didn’t know the key to getting pucks past her.

“I don’t know,” Davis said with a laugh. “Can you let me know, because I don’t think I’ve scored on her?”

Frost said with good goalies like Rigsby, the key to success is firing a lot of shots on goal, taking away her vision and capitalizing on rebound opportunities.

Minnesota sophomore goalie Amanda Leveille made a number of nice stops in a sweep of Colgate. In her first weekend as the Gophers’ starting goalie, she made 45 saves.

Minnesota was on the penalty kill 14 times in two games last weekend and Frost said that can’t happen against Wisconsin.

“We took way too many [penalties], and you just can’t do that against a top opponent,” he said.

Minnesota killed two 5-on-3 penalty situations, and Frost said the team did a good job with that. But he said the 5-on-4 penalty kill needed a little work.

“When you’re so early in the season, it’s hard to be really sharp in your special teams,” he said.

This weekend, on top of the border-battle rivalry and the fact that the Gophers are the defending national champions, the Badgers will present a legitimate challenge to the Gophers’ 51-game winning streak

“I’m sure everyone wants to end the streak,” Brandt said. “They probably think a little bit more about it even than we do.”

Minnesota ended it with a 3-2 win. And Rigsby hasn’t forgotten.

“That’d be awesome to be able to break [the Gophers’ winning streak],” Rigsby said. “They broke ours my sophomore year, [so] it’d be nice to be able to do the same to them.”

The Gophers know they’ll get Wisconsin’s best this weekend and Frost said the series will be a good barometer for both teams to see where they stand early in the year.

“We can’t take a weekend off, obviously, and I think even Colgate showed us that,” Brandt said. “Every team is going to be coming for us, and it really doesn’t matter who we’re playing.”