Students kicked out of home for three weeks

One of the renters had to live in her car for three days. 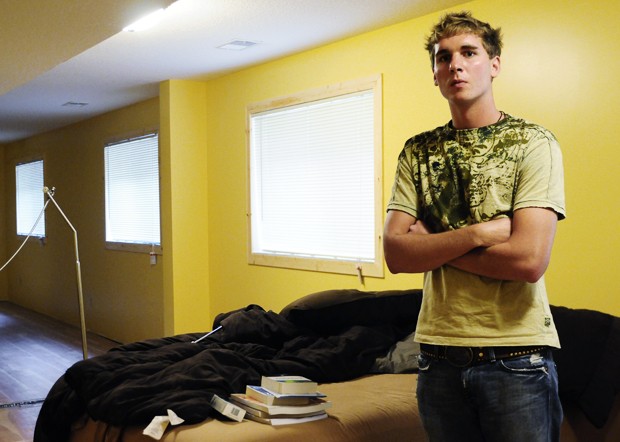 Due to incomplete safety and code compliance inspections, second year pre-law student Mitchel Doering was unable to move into his Dinkytown house until last Thursday.

After eight months of searching for an affordable house close to the University of Minnesota, Shannon Calhoun and Mitchel Doering finally settled for 1120 8th Street S.E. The houseâÄôs size, location and rental price enticed the students to sign their lease in May, before the building was complete. Little did they know that move-in day would mark day one of their three weeks of homelessness. The problems began an hour after Calhoun, a sophomore in philosophy and English studies at St. Thomas University , left her hometown of Redwing, Minn. to move into the house. She received a call from her landlord telling her she couldnâÄôt move in but he didnâÄôt say why, Calhoun said. âÄúWe thought it mightâÄôve been a permit problem, but he didnâÄôt know the situation,âÄù Calhoun said. âÄúI was in shock.âÄù The students soon discovered the reason they couldnâÄôt move in: the property was rented before a certificate of occupancy was issued. Final inspections for safety and code compliance had not been completed before the students moved in. University pre-law sophomore Doering was living at home in Brownton, Minn. and wasnâÄôt set to move until a few days later. Doering and CalhounâÄôs roommate Leila Hanjani also wouldnâÄôt move in until later. Calhoun didnâÄôt have family members in town to help her, so Doering let her stay with his family for the night. Other nights she lived with a friend in Eagan, âÄúthrowing him money anytime I could just to help him with his rent,âÄù she said. The few nights Calhoun couldnâÄôt find friends to stay with, she slept in her car. The studentsâÄô landlord, Tim Harmsen , offered to transfer their belongings to a garage owned by his rental company, Dinkytown Rentals . He also offered to return their security deposit and unpaid first monthâÄôs rent if they agreed to cancel the lease because he wanted to help them out, he said. âÄúThis wasnâÄôt fair to them and I didnâÄôt know how long it would take to resolve the issue,âÄù Harmsen said. Calhoun and Doering said they rejected the offer because they didnâÄôt have any other place to stay. The roommates immediately began searching for other houses in the area, but to no avail. âÄúWe started to panic because we started school in five days,âÄù Doering said. Meanwhile, they spoke with city officials to resolve the issue, including Ward 3 councilmember Diane Hofstede . City of Minneapolis building official Patrick Higgins said he received a final inspection request for the house on Sept. 1 âÄî the day the students were supposed to move in. Two weeks later, the inspections determined there had been significant revisions to the original plan that needed to be approved, Higgins said. Revisions included a reduction from four bedrooms to three, two extra closets, a partition wall in the basement and a second fireplace, Higgins said. The house also had five bathrooms âÄî two of which were in the basement âÄî and a laundry facility. Six parking spaces âÄî four more than the zoning code would permit for a three-bedroom house âÄî had also been installed. While the house was being inspected and the revised plan approved, Doering and Calhoun were commuting to school, spending up to three hours driving per day. âÄúIf this house was done in early to mid-August, how was this issue not resolved beforehand?âÄù Calhoun said. The students were finally able to move in on Sept. 17. âÄúAs stressful as it was, I canâÄôt describe how good it feels to be in my house and unpack my things,âÄù Calhoun said. Harmsen said he was not aware the certificate of occupancy wasnâÄôt issued and he was informed by the contractor that the house was approved. âÄúStill, I think we couldâÄôve done a better job following up with the inspectors. WeâÄôre working on that,âÄù he said. Harmsen doesnâÄôt think the real problem was about code compliance or safety. âÄúThis was an unequal application of the zoning laws to promote a preferred class of residents, and that class is homeowners,âÄù he said. âÄúThese [students] are legal adults and they have a right to decent housing.âÄù Doering feels he and Calhoun were the âÄúinnocent people caught up in a political mess.âÄù âÄúWe have no real proof of who was at fault,âÄù Doering said. âÄúIâÄôm just glad we got to where we wanted to live.âÄù âÄúNext time we rent a new house, we know we need to make sure everything is sealed tight and inspected before we move in,âÄù Calhoun said.