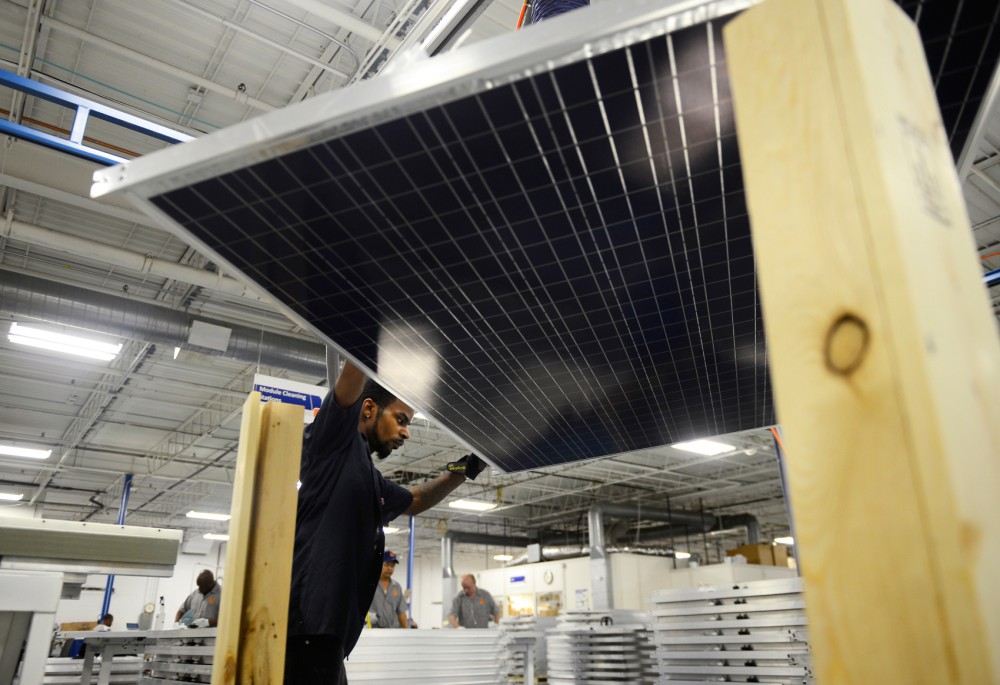 Employee of tenKsolar, Dwayne Blakely, moves solar panels onto a module light table for testing on Jan. 25, 2016. The University of Minnesota will be installing solar panels in an effort to make progress on a climate action plan.

The University of Minnesota is halfway to meeting its goal of reducing campus carbon emissions 50 percent by 2020 — a benchmark the school first outlined in 2008.

In 2008, former University President Robert Bruininks signed the American Universities and Colleges Presidents Climate Commitment to achieve carbon neutrality across all the University’s campuses by 2050.

The agreement garnered signatures from universities around the country, like the University of Illinois and Ohio State University.

“The U is committed to energy conservation regardless of what is happening nationally,” said Shane Stennes, director of sustainability at the University.

In order to achieve the goal, sustainability committees were created in 2010 on all of the school’s campuses and the “It All Adds Up Campaign” was expanded to include waste reduction.

The Climate Action Plan was released the next year in an effort to reduce greenhouse gas emissions over the next decade.

The main goal of the sustainability committee is to have a cleaner source of energy, Stennes said.

Some of the steps taken are installation of LED lights rather than HPS in parking ramps across the University. The East River Road parking ramp has saved 71 percent energy. The new LED lights reduced energy use to 428,259 kWh from 1,496,620.

The Office of Sustainability partners with various programs, student groups, labs and volunteers around campus to maximize sustainability.

“We take materials after the U is done with it. We are not going to dispose of those, we are going to find an outlet for it that’s environmentally sustainable,” said Todd Tanner, the program coordinator for the University’s ReUse Center, which the sustainability committee partners with.

The sustainability office is also working on planting gardens on University roofs. A couple of green roofs are already in place in Williamson Hall and the Civil Engineering Building.

The school’s next goal is to target energy consumption by laboratories, Stennes said.

“Laboratories take 25 percent of space but use 60 percent of the University’s energy,” Stennes said.

He said he wants to make labs around the University more energy efficient without compromising safety.