The residents of the neighborhood hope to attract development and engage students while lowering noise and traffic. 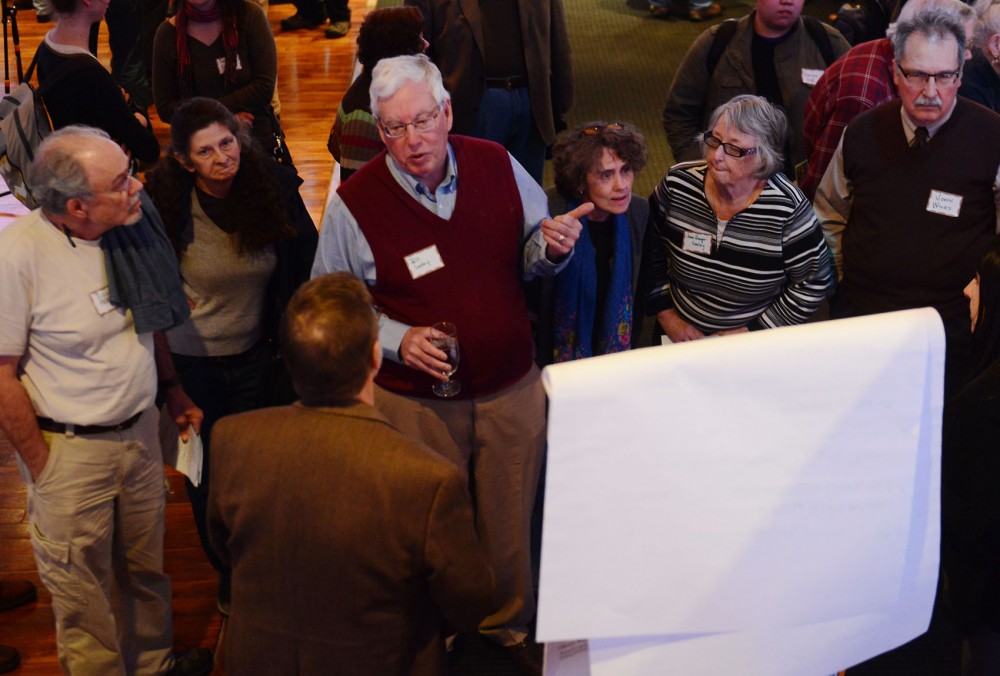 Bill Seeley and other Prospect Park residents brainstorm improvements to their neighborhood at the annual Prospect Park East River Road Improvement Association meeting at the Profile Event Center on Monday.

More than 60 people gathered at the Profile Event Center to discuss livability, housing and development, environmental problems, transportation and safety issues in the neighborhood.

Strategic planning consultant Roger Meyer said the meeting was a way for neighborhood residents to draft a plan and propose projects for the next few years.

“Neighborhood organizations have to react to things all the time,” he said. “This is just a way to be more strategic about reacting.”

PPERRIA president Christina Larson said they hold the annual meeting to figure out what the organization wants to get done, and that it’s up to community members to set the goals for projects they want to see in the next several years.

Among the goals mentioned at the meeting were building a new grocery store, developing more ways to engage University of Minnesota students, conducting studies on the impact of the light rail’s vibration and determining how pollution from nearby highways affects the neighborhood’s air quality.

The members of PPERRIA also discussed the impact of the University’s Ambulatory Care Center and new housing projects on the neighborhood, including traffic and noise.

“We’d like to see a variety of things,” PPERRIA treasurer Dick Poppele said. “Not only students, but also senior and mixed-income housing should be involved.”

Increasing development and making the neighborhood more modern was the theme of the night.

“We want to capitalize on University research,” said Dick Gilyard, president of the neighborhood’s nonprofit planning group Prospect Park 2020. “This place could be an example of a 21st-century neighborhood.”

Though some residents focused on the future of the neighborhood, others said they wanted to maintain the historic areas of Prospect Park. Some even expressed interest in stopping high-density development.

Rep. Phyllis Kahn, DFL-Minneapolis, said she attended the meeting to hear from residents about changes they want to see in the area.

“It’s a wonderful neighborhood,” she said. “I’ve lived there longer than anywhere else, and it’s good to see the priorities.”

Going forward, the organization hopes to pare down the ideas gathered during the meeting and focus on a few in the coming year that could produce results.

“This could be an intense mix of living, learning and jobs,” Gilyard said. “We’ve drafted a vision and need to advocate for the neighborhood.”