Women’s team bounces back at Iowa

The men’s tennis team lost both of its matches on the road this weekend. 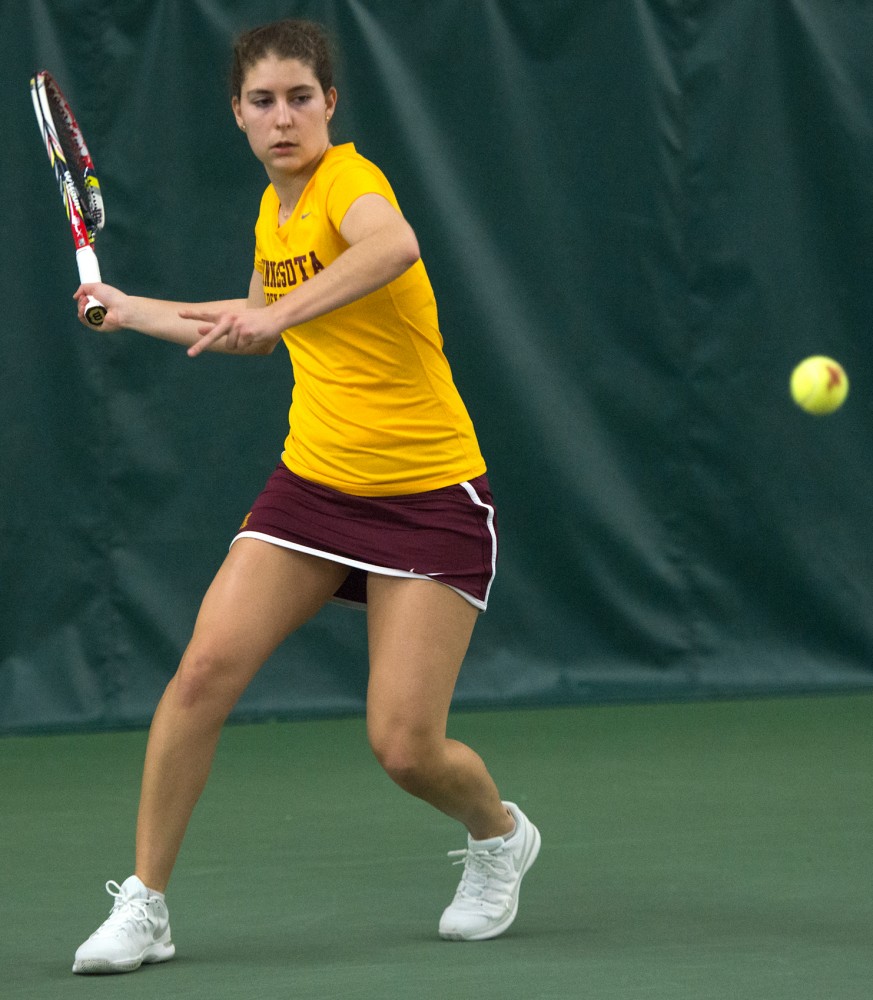 Jack White
The Gophers women’s tennis team split the singles matches in both its duals over the weekend, leaving the doubles point to decide the outcome of each.
Minnesota lost the doubles point and the dual at Nebraska 4-3 on Friday but rebounded to defeat Iowa on the road 4-3 on Sunday.
“We were disappointed we didn’t get the Nebraska match,” head coach Chuck Merzbacher said. “The only way to respond is come back and get Iowa. Any match on the road in the Big Ten, you just got to battle. We won a very close doubles point [against Iowa], and that was important. We were in every single match that we played.”
The Gophers (11-7, 3-2 Big Ten) and Huskers split the No. 1 and No. 2 doubles matches on Friday, but Nebraska took the doubles point by winning the No. 3 match 7-6.
The two teams then each won three singles matches to give the dual to the Huskers.
Minnesota managed to win the doubles point on Sunday at Iowa, earning victories in the No. 1 and No. 3 spots.
The Gophers then split the singles matches with their opponent again, but this time, they earned the victory.
Senior Jessika Mozia won in the No. 4 singles spot to stop a four-match losing streak while playing through an injury.
“If you’re a really tough team, you’re going to just rebound,” Merzbacher said. “It’s not that bad things are going to happen to you; it’s how you respond.”
Men’s team loses two matches
The Minnesota men’s tennis team lost both of its matches over the weekend to start a long stretch of Big Ten play.
Nebraska defeated the team at home on Friday 5-2, and the Gophers lost to Iowa 4-1 on the road on Sunday.
“We’re missing too much,” head coach Geoff Young said. “We have to keep our confidence at a higher level so we’re sure of our shots.”
Minnesota (6-11, 0-3 Big Ten) lost the doubles point against Nebraska to start off its second Big Ten dual of the year.
Senior Ruben Weber and junior Jeremy Lynn combined to win two singles matches for the Gophers, but the team lost the other four matches.
Minnesota also lost the doubles point on Sunday to the Hawkeyes, and sophomore Matic Spec was the team’s only player to win a singles match.
“I just kind of kept playing,” Spec said. “I’m just trying to improve, trying to be more confident when I play and have a better game plan, and today it worked out.”
Weber and sophomore Felix Corwin’s singles matches went unfinished.
Delete Image
Align Left
Align Center
Align Right
Align Left
Align Center
Delete Heading