For remaining playoff teams, its win or go home 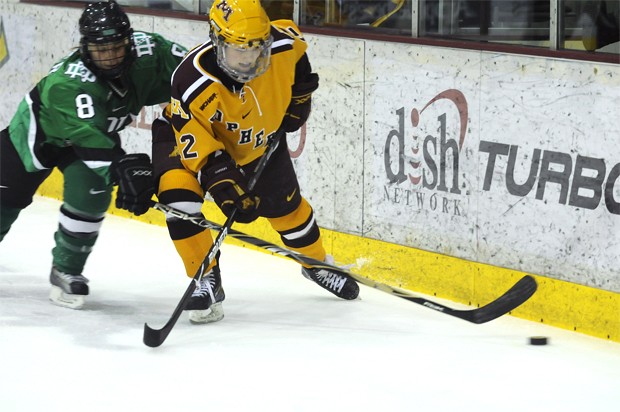 ItâÄôs do or die for the Minnesota womenâÄôs hockey team. No. 1 Minnesota (30-3-3 overall, 23-2-3-2 Western Collegiate Hockey Association ) will face off against the fifth seed Minnesota State (12-18-5, 7-16-5-2 ) Saturday at 1p.m. in Ridder Aren a. The winner will move on and the loser will go home. The game is part of the semifinals in the WCHA Final Face-off. The prevailing team will face the winner of the Wisconsin and Minnesota-Duluth in the championship game on Sunday at 1:07p.m. Minnesota State played St. Cloud State last weekend and won its first-ever playoff game and series since the league changed the format to best-of-three seriesâÄô in 2005-06. The Mavericks will join the only three teams to ever win the WCHA championship in the ten year history of the league. With the potential to win another championship this weekend, Minnesota is focusing on putting themselves into that position, coach Brad Frost said. âÄúWeâÄôre really focused on Saturday because we know if we donâÄôt beat Mankato, we wonâÄôt be playing for a championship any longer,âÄù the 2008-09 WCHA co-head coach of the year said. Minnesota beat Minnesota State all four times the two teams squared off this season but the Mavericks have won four of their last five games. Senior captain Melanie Gagnon said she thinks there wonâÄôt be any surprises coming from Minnesota State. âÄúI think the only thing new is that its do or die for both of us,âÄù she said. âÄúI think that killer instinct is going to come out in both teams. ThatâÄôs something we have to be aware of. WeâÄôve got to go in like itâÄôs a be all, end all.âÄù The Mavericks are a quick team with talented forwards. This will pressure the Gophers to make quick decisions with the puck. With the quickness of the MaverickâÄôs forwards, defense and goaltending will be important in the match-up for the Gophers, but MinnesotaâÄôs offense will be just as important, Gagnon said. âÄúWeâÄôve got to get some pucks in the net so that itâÄôs easier in the defensive zone,âÄù she said. âÄúWe got to make sure to get a cushion before we lay back. All components are going to be key now.âÄù Defending those quick forwards will pressure the defenders to mind their gap, Gagnon said. âÄúWe know they like to fly the zone a lot too,âÄù she said. âÄúWe have to keep our head on a swivel to make sure they donâÄôt get behind us because once theyâÄôre behind us, theyâÄôre hard to catch.âÄù Gagnon hasnâÄôt had any trouble at the blue line this year, as she is this seasonâÄôs WCHA Defensive Player of the Year and an All-WCHA First-team member. Up front, she will have offensive help from two first-team members in first-years Jocelyne and Monique Lamoureux , the latter of which is the WCHA scoring champion and Rookie of the year. First-year Alyssa Grogan garnered the Goaltending Champion award to keep MinnesotaâÄôs goaltenders recognized. The individual awards are nice, but Minnesota wants the team prize. With the do or die mentality, Gagnon said she goes into this weekend with no mercy. âÄúItâÄôs playoff hockey and thatâÄôs what we play for,âÄù she said. âÄúFrom the drop of the puck, itâÄôs go time. ThereâÄôs no looking back because thereâÄôs nothing to look back for.âÄù