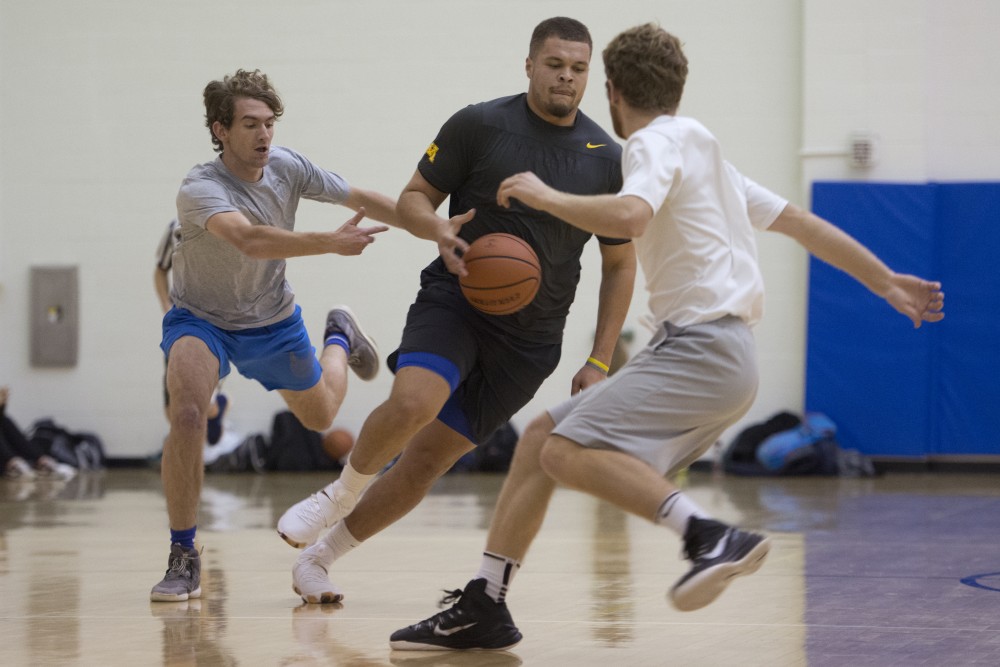 Senior Noah Scarver handles the ball during an intramural game on Monday, Dec. 4 at the Rec Center on East Bank. Scarver previously played football for the Gophers.

Noah Scarver accomplished something many athletes dream about — he earned a spot on a Division I football team.

For Scarver, though, it was not all he thought it would be.

“I was expected to gain a bunch of weight that I didn’t want to gain. I got to the point where it felt more like a full-time job even though I wasn’t getting paid for it,” Scarver said. “I would sit there and dread every moment of being there. I needed to be done with it.”

That’s when he made the decision to step down from the sport he once loved. Scarver quit the Gophers football team in early 2016 after transferring from Montana University. The former tight end said he lost a love for the game. However, Scarver did not want his sports career to end entirely.

“A bunch of my friends play intramurals and I was like, ‘I’m a competitive person and this is something competitive,’” Scarver said. “I might as well do it instead of sitting around watching other people play sports.” Scarver joined intramural basketball in the spring of 2015 while he still played football for the Gophers. Intramural basketball at Minnesota is played five-on-five, and Scarver plays in the competitive league with referees and playoffs. The regular season lasts during the second half of the fall semester.

He has won a basketball intramural championship in the four seasons that he has played. During the summer, he plays in a men’s league with men who are twice his age. He said basketball keeps him healthy and wants to play for the rest of his life.

“People can get angry, but it’s more for fun,” Scarver said. “I get really excited for every game even though I know its intramurals.”

Though he was a Division I football player, this is not Scarver’s first experience with basketball. Scarver was an All-Conference basketball player for Washburn High School in Minneapolis, which motivated him to play intramural basketball. He thought about trying out for the basketball team, but he decided not to do it because he said it would cause him stress.

Tyler Dittrich, Scarver’s intramural basketball teammate, said he knew Scarver would be good. He said teams are picked either through a recruiting process or though playing together for a long time.

“He has a lot of passion. He’s well on his feet,” Dittrich said. “A lot of big guys aren’t quick on their feet. He’s a bigger guy that can dribble and bring it into the lane. We saw that in him right away.”

Scarver announced his retirement from football in March 2016. He said football put too much stress on his body. He had been playing since elementary school.

Jennifer Scarver, Noah’s mother, said she was sad when her son told her he would be retiring from football. However, she understood why Noah decided to end it.

“We always enjoyed watching him play ball, but we understood that he lost the love for the game because it had turned into so much of a business,” Jennifer Scarver said. “Going to a college where all those kids are [skilled] is a business. You have to compete with the best.”

His father, Tony Scarver, was disappointed that his son chose to retire, but like Noah’s mother, he also learned to accept it.

“I watch a lot of college football. I had to deal with his decision,” Tony Scarver said. “You couldn’t force him to stay if he didn’t want to keep playing. It’s turned out pretty well.”

Now, the former tight end has an intramural basketball team to worry about. His team is currently in the semifinals of the intramural playoffs.